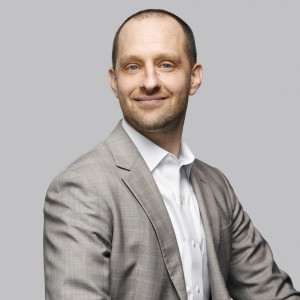 The agency mortgage-backed securities (MBS) market, which includes Fannie Mae, Freddie Mac and Ginnie Mae securities, continues to make headlines across both major newspapers and financial screens. As we’ve now had our first peek at 2018 performance, we run down the top five trends on our radar for the agency mortgage market.

In September, the Fed announced that it would begin to unwind its $4.5 trillion balance sheet, gradually lopping off the trillions of dollars of assets tacked onto the Fed’s books from purchases of MBS following the financial crisis. As detailed in The Fed’s Shrinking Balance Sheet and MBS Opportunities, the Fed will cease reinvestment of the maturing U.S. Treasuries and paid-down agency MBS that it holds, gradually removing a large buyer of these securities. This increased supply could pressure spreads to widen.

Agency MBS net supply was $316 billion in 2017.1 For 2018, the Fed’s runoff will add roughly $150 billion of supply for investors to absorb, bringing estimates for yearly net supply up to $500 billion – a significant amount of paper for the market to digest.

Treasury rates – and subsequently mortgage rates – have risen sharply since early January. A higher price tag for homebuyers slows new purchases, and higher rates mean fewer refinancing opportunities – both of which could alleviate the increase in organic net supply.

Fannie and Freddie are government-sponsored entities (GSE’s); that is, they are guarantors on the underlying mortgage loans and government sponsorship is implied, but not guaranteed. A draft proposal from Sens. Bob Corker and Mark Warner3  would allow existing Fannie and Freddie loans to convert to a new system with an explicit government guarantee.

Under the Corker-Warner proposal, the new guarantee would be provided by Ginnie Mae and financed by a fee on mortgages, with the provision that Fannie and Freddie would remain in conservatorship and eventually their charters would be wound down. In addition, the proposal pushes for competitors to Fannie and Freddie and for transfers of risk to the private market.4

With the explicit guarantee, the proposal increases the prospect of affordable housing and boosts support for first-time homebuyers. For legacy Fannie and Freddie securities, spreads could tighten. Regulators could lift Fannie and Freddie bonds to a higher tier of capital – making them more attractive to certain buyers. If the bonds become more competitive with Ginnie Mae from a regulatory perspective, there could be reduced demand for Ginnie Mae securities, which are already backed by an explicit guarantee.

The proposed bill is still in its early stages and faces significant political hurdles. However, GSE reform remains a hot-button issue and is reportedly a priority of the Trump administration. If reform is going to happen, this bill appears to be the closest solution that works for all relevant stakeholders.

As mentioned, GSE reform could involve shifting Fannie, Freddie and Ginnie Mae into a single-security world, where all agency MBS is issued through a common platform. The market would begin to view the three agencies as fungible.

This would promote liquidity and deepen the MBS market. While the agency mortgage market is already one of the largest, most-liquid bond markets in the world, a single security would make the market even more liquid, and further promote the amortizing 30-year fixed-rate mortgage available in the U.S. The single-security structure would help to preserve the TBA, which is the foundation for the mortgage market.

Ginnie Mae leadership is taking steps to reduce “churning” in its MBS program. Churning refers to accelerated refinancing speeds that can be prompted by aggressive lenders. The aim is to slow prepayment speeds in Ginnie Mae pools.

In December, the agency announced that it will require new loans to have at least six consecutive monthly payments and a 210-day time period before refinancing can occur.5 Otherwise, these loans would be forced to be securitized into less-liquid custom pools that trade at a discount to the larger, more liquid Ginnie Mae multi-issuer pools. More recently, in February Ginnie Mae warned a “small number” of lenders to begin “corrective action plans” that would identify “immediate strategies to bring prepayment speeds in line with market peers.”6

Ginnie Mae spreads could tighten if further efforts to stifle prepayment speeds gain traction. That said, Ginnie Mae continues to have policy risks related to its government guarantee and the potential addition of an explicit guarantee to Fannie and Freddie bonds.

Ginnie Mae 4 percent TBAs7 have appreciated by over 20 ticks year-to-date8 versus like-coupon Fannie securities. Some of this price increase is attributable to the sell-off in rates, as Ginnie Mae securities tend to be shorter duration and typically perform better than conventionals in sell-offs.9 Also, the market has taken notice of potential changes to prepayments and has started to price in a better convexity profile of Ginnie Mae borrowers.

One of the most salient trends in agency MBS has been low volatility. The protracted period of low rates since the crisis, along with the Fed buying a significant portion of the most-negatively convex10 mortgage collateral, has kept volatility at bay.

With homeowners having the option to prepay their mortgage in whole or in part at any time, MBS investors are “short volatility.”11 As rates move and volatility rises, mortgage borrowers will, in theory, have more opportunities to refinance their mortgages if rates fall (call risk) or remain in it for longer than expected if rates rise (extension risk) – both of which are problematic for the MBS investor.  Lower volatility therefore means less risk to the MBS investor, and can warrant tighter spreads.

With the Fed stepping back and rates sharply higher year-to-date, implied volatility has spiked in sympathy. As Figure 1 illustrates, implied volatility12 bottomed out in 4Q17 along with nominal spreads, but climbed over 30 ABVP13 in early February. This has stoked extension concerns into the MBS market.

However, in our view, this extension risk is fairly muted. As Figure 2 illustrates, approximately 90 percent of outstanding conventional MBS are non-refinanceable when adding a 50bp “refi hurdle” onto the current mortgage rate. 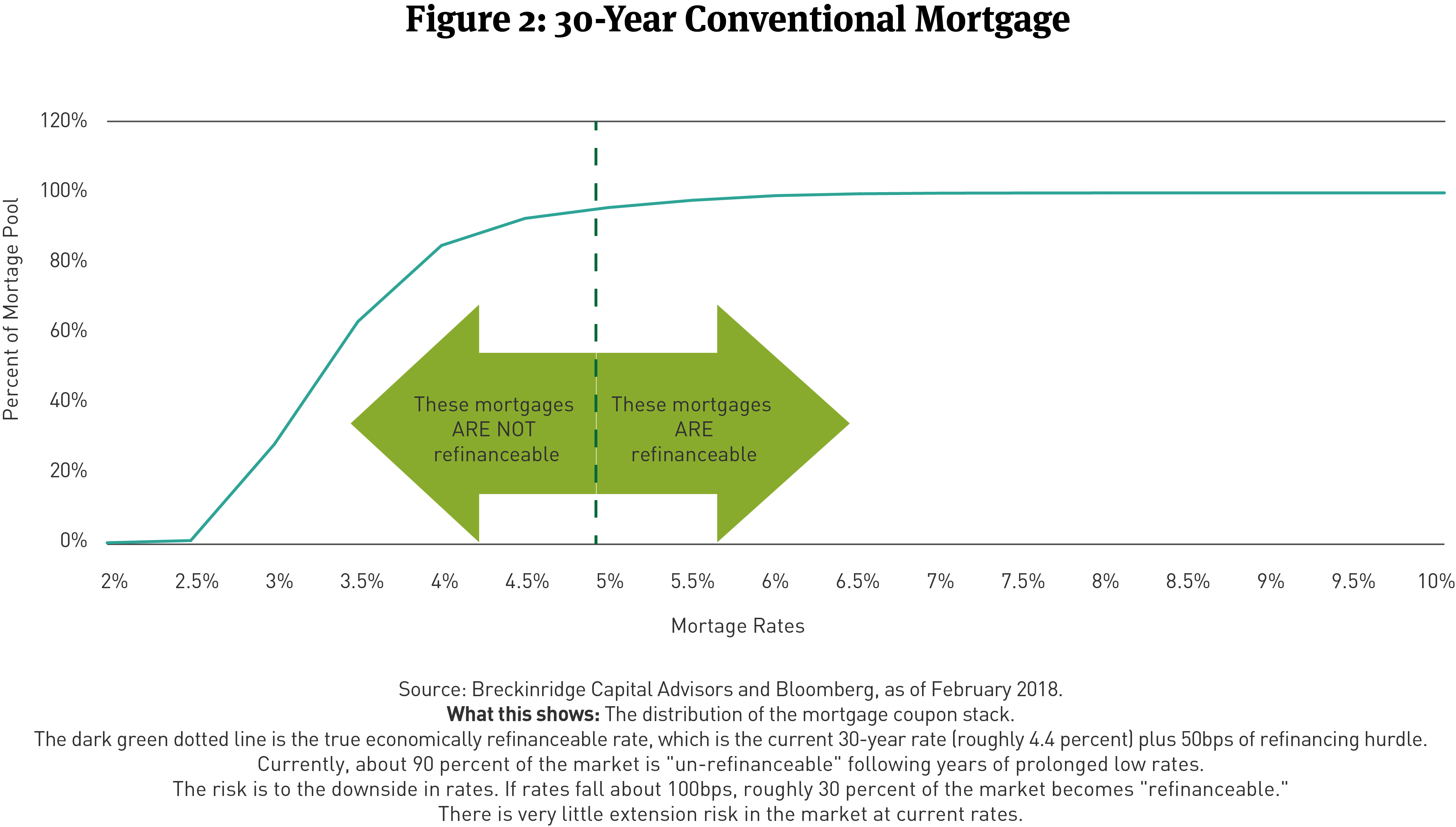 Also, Figure 3 shows that duration and convexity have already risen significantly, and likely have little room for further increases.14

Changing MBS ownership trends have also contributed to lower volatility in recent years. Since the financial crisis, the proportion of buyers that are more active hedgers of negative convexity – such as GSEs and REITs – has declined, and been largely replaced by the Fed, which does not hedge.15 Fewer active hedgers lessened the adverse impact of recent rate sell-offs on MBS valuations. For example, a 100bp rate sell-off in 2006 would have resulted in more than $1.7 trillion of MBS duration extension in 10-year Treasury equivalents versus $600 billion today,16 and fewer entities are concerned about hedging the potential extension risk.

[2] The Fed’s balance-sheet unwind is occurring under a cap structure. The Fed will still be buying MBS, but instead of reinvesting the paid-down MBS dollar for dollar it will only reinvest above a certain cap amount. The cap started at $4 billion per month in September, and will gradually ramp up to a terminal level of $20 billion per month.

[4] The proposal allows for privatized entities – at least five – that will issue government-guaranteed MBS. No single guarantor would be able to guarantee more than a quarter of MBS outstanding.

[7] In the TBA, or To-Be-Announced market, a seller agrees to issue a TBA security at a future date, but without identifying the specific underlying mortgage pools (just certain pre-specified terms).

[9] Conventional mortgages do not include FHA or VA loans.

[10] The Fed executes its purchases via the TBA market, which by definition means they are delivered the most- negatively convex collateral.

[13] ABVP stands for annual basis point volatility: the level of volatility implied in the market prices for swaptions.

[14] In terms of mortgages, convexity is negative because when rates fall, bonds are more likely to be refinanced and shorten their duration. The MBS Index has already become much less-negatively convex, implying that the likelihood of higher rates and longer duration is already priced in.