The influence of conditions related to the spread of COVID-19 remained during July, as many states experienced increases in cases, hospitalizations and deaths. As states relaxed social and business restrictions, economic indicators—industrial production, retail sales and existing and new home sales, for example—rebounded above initial estimates. Stock and bond prices increased. For bond investors, the persistent grinding of yields lower and spreads narrower challenged the search for income.

Investors appeared to look past declining gross domestic product (GDP) measure (a seasonally adjusted negative 32.9 annual rate) and unemployment claims (1.43 million in the week ended July 25). Their enthusiasm may be buoyed by expectations for improved economic and business conditions in 2021. As the month closed, the U.S. dollar trended weaker against other major global currencies which could impact demand for U.S. dollar-denominated IG fixed income.

In our view, the path to recovery will be slow and uneven with the risk still present of a second wave this fall. Government intervention remains an overwhelming market technical, overriding fundamentals. After the Federal Open Market Committee meeting, Fed Chairman Jerome Powell said, “The path forward for the economy is extraordinary uncertain and will depend in large part on our success in keeping the virus in check.” He said Congress and the central bank would need to do more in the months ahead. Entering August, additional fiscal stimulus was stalled in House/Senate/White House negotiations.

Municipal bond yields broke out of a tight trading range mid-month, reaching new record low levels in several tenors. During July, AAA general obligation bond yields fell 14 to 18bps in the 2- to 5-year range, 22 to 25bps up to 10 years and 25 and 26bps from 10 to 30 years. Yields below 1 percent stretched across the curve to 17 years. Year-to-date, yields have declined 90bps in the front end, between 80bps and 90bps in the belly of the curve and more than 70bps out longer. The muni curve flattened modestly over the month, with 2s10s and 2s30s curves sitting at 52bps and 124bps, respectively.

Municipal issuers continued the year’s accelerated pace of taxable muni deals, accounting for $16 billion in issuance during July, pushing year-to-date taxable supply to $69 billion, per The Bond Buyer. The low interest rate environment and provisions limiting state and local tax deductions contained in the Tax Cuts and Jobs Act of 2017 continued to support taxable muni bond issuance. Barclays estimates that taxable bond issuance could exceed $105 billion in 2020, which would be a 50 percent increase over notably high level issued in 2019. While healthy taxable supply has provided some crossover opportunities for tax-exempt strategies, spreads tightened over the month, particularly in the front-end. The yield pickup waned somewhat in the low-yield environment, although valuations relative to corporate bonds continued to look compelling. 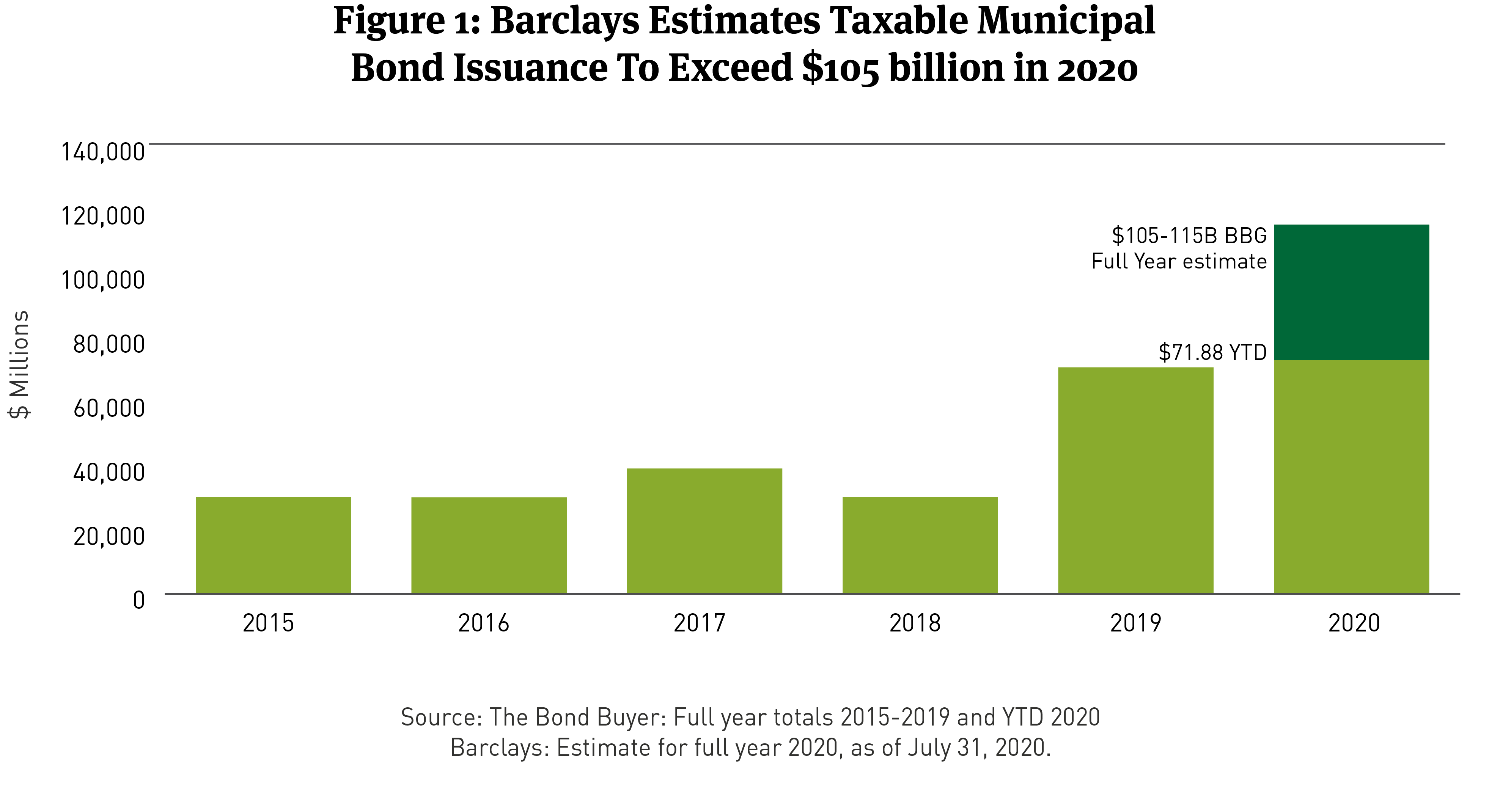 Muni fund flows were positive in July, per J.P. Morgan, finishing the month with $1.8 billion inflows for an eleventh consecutive week pushing the year-to-date inflows to $3.1 billion.

Credit fundamentals remained challenged, in our view, particularly in sectors reliant on rebounding consumer activity and increasing mobility. On a more positive note, robust fund inflows and strong demand for bonds due to heavy projected seasonal reinvestment should support the positive technical environment in August.

Credit fundamentals have weakened with the recessionary conditions spurred by COVID-19: high unemployment, repressed consumer demand and stifled business activity, have negatively impacted revenues and earnings. However, after a majority of Q2 earnings reports, according to S&P, companies are generally beating very low expectations.

Rating agency credit downgrades slowed after a flurry of activity in April and May. Still, downgrades are expected to outpace upgrades. Volumes of fallen angels, company ratings slipping from IG to high yield categories, are likely to remain elevated.

We consider MBS spreads to be attractive relative to Treasuries due to strong technicals in MBS attributable to the Fed’s unlimited quantitative easing. We expect carry rather than spread tightening to contribute to mortgage total return performance going forward. ABS and ACMBS spreads approached year-end 2019 levels, but should still outperform in a risk-off environment, in our view. As government stimulus tapers off, its likely more loans will become delinquent and/or default given weak labor market conditions.