As widely forecast, the FOMC cut their benchmark rate by 25 basis points (bps) in July, citing weakness in the global economy and uncertainty due to ongoing trade tensions. This was the first rate cut in 11 years and was described by Fed Chairman Jerome Powell as a “midcycle adjustment.” The FOMC noted in both its press release and subsequent press conference that while “the outlook for the U.S. economy remains favorable,” the cut was intended to support this outlook and offset the effect of “weak global growth and trade policy uncertainty.” While the FOMC voted in favor of a cut, it is notable that two members dissented, potentially making future cuts more challenging.

Fixed income benefited from the late-month volatility as the Treasury curve flattened, a function of two-year rates rising while the 10-year range closed unchanged at 2 percent. While the 2s5s curve remains inverted, both 2s10s and 2s30s flattened by 12bps and 11bps, respectively. 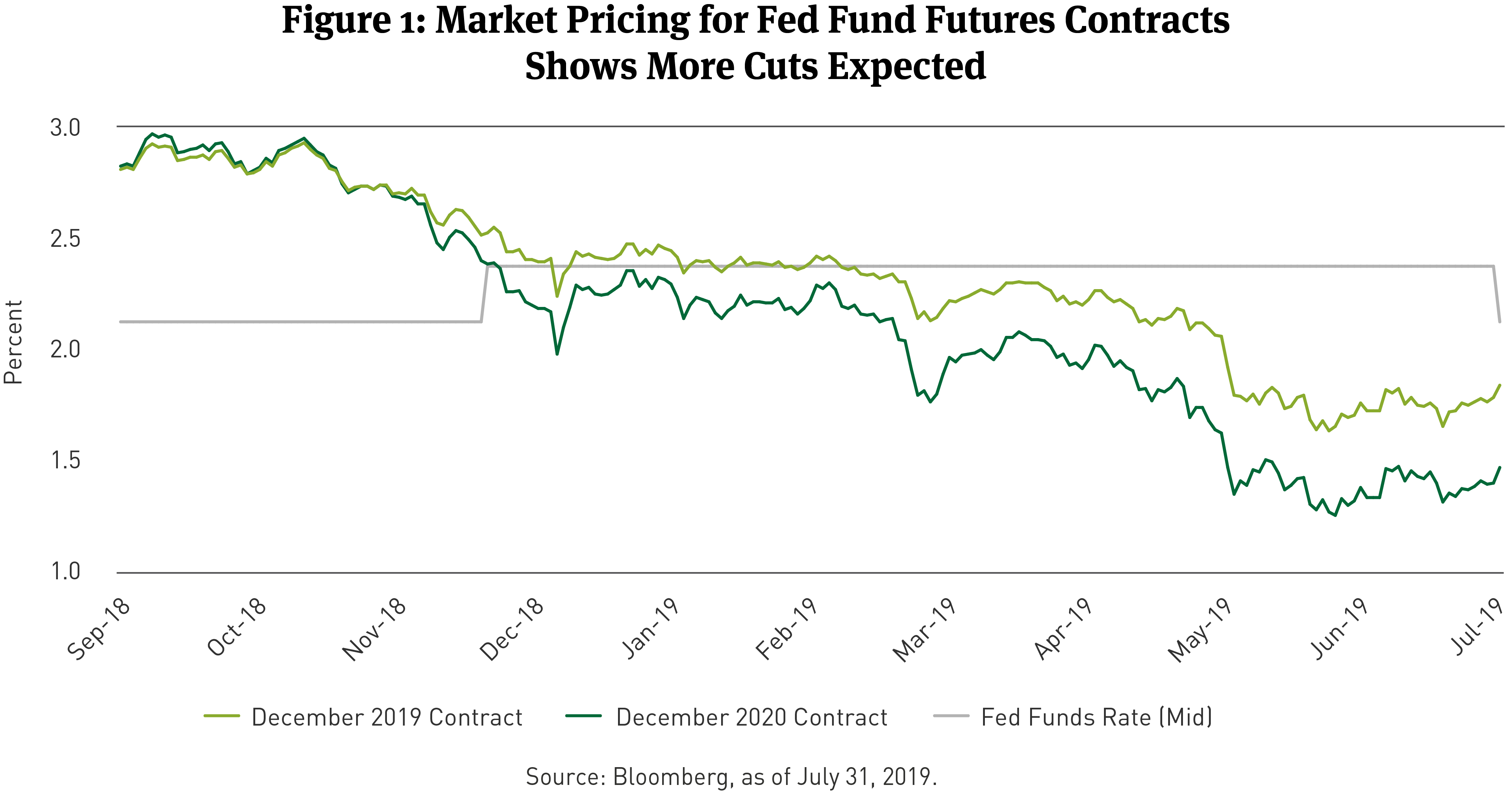 Municipal yields fell in tandem with Treasuries but outperformed. Positive technicals bolstered municipals as they continued their positive performance streak, with the Bloomberg Barclays Municipal Index returning 0.81 percent in July, bringing the year-to-date total return to 5.94 percent. July returns were strongest for bonds with maturities of five years and longer. Yields in shorter maturities fell the most, pushing ratios to extreme levels as absolute yields closed the month at year-to-date lows. Yields in the 10-year range and longer ended the month only 25-30bps from all-time lows reached in July of 2016.1 Strong seasonal technicals were the primary driver. Supply was tepid as issuance dropped to $25 billion, the second lowest month of the year. In addition, demand was strong given heightened reinvestment of coupons and maturities and record-breaking fund flows totaling $52 billion over 29 consecutive weeks.2

Investment grade corporate spreads reached their tightest levels of the year (+108bps) in July due to decent U.S. economic data and the prospect of further easing from global central banks. Spreads tightened 7bps with the Bloomberg Barclays U.S. Investment Grade Corporate Index generating 63bps of excess returns over U.S. Treasuries in July and year-to-date total return of 10.47 percent. The best performing sectors were Utilities, Tobacco, and Life Insurance while laggards included Independent E&Ps, Aerospace & Defense and Chemicals. Lower quality outperformed with BBB-rated corporates generating 72bps of excess returns compared 55bps for single-A’s per Barclays. Technicals within the corporate market remain strong due to broad-based inflows and declining dealer inventories. Per Wells Fargo, IG funds reported $21 billion of inflows during the month, bringing year-to-date inflows to $166 billion. IG supply for July was $103 billion per Barclays, up 65 percent year-over-year, but year-to-date volume is still down 7 percent from the same period in 2018.

MBS had a positive month in July, returning 43bps of excess returns; year-to-date total return stands at 4.59 percent per the Bloomberg Barclays U.S. MBS Index. Net supply of MBS continues to run below forecast,3 as the securitization rate has dropped, and new and existing home sale data has been volatile and clouded by seasonal and weather-related impacts.

ABS performance was modestly positive in July, with 8bps of excess return over Treasuries, per the Bloomberg Barclays ABS Index. While net supply for the sector has been healthy and in line with projections, credit card supply is running roughly 45 percent lower year-over-year.4

[3] Based on dealer estimates.

Investment grade corporates continued their strong performance in February. Find out what trends are driving IG fixed income in our latest commentary.

In this short video, hear from Breckinridge President Peter Coffin as he offers some perspective during this time of turmoil.

Independence is a key part of the fabric of Breckinridge.