2021 Outlook Follow-up Blog (Jan. 6, 2020): Democrats’ apparent Senate wins in Georgia are a credit-positive for the municipal bond market and may result in material changes to tax and infrastructure policy. Read Adam Stern’s full market outlook here “2021 Municipal Market Outlook: To Immunity and Beyond!”

Given the Democrats’ apparent slim majorities in the House and Senate, material changes to state and local aid, tax, or infrastructure policy are most likely to take shape in a budget reconciliation bill (possibly two of them). It is also likely that the new Congress will prove unable to enact aggressive policy changes like ending the filibuster or inviting Puerto Rico or the District of Columbia to become states.

The apparent Georgia Senate runoff results are a credit-positive for municipal bonds. As we outlined in 2021 Municipal Market Outlook: To Immunity and Beyond! and our Update Muni Credit and the November 2020 Elections, the incoming Biden administration and Democrats support additional stimulus spending, over-and-above the $910 billion just enacted in December 2020’s Coronavirus Response and Relief Supplemental Appropriations Act (CRRSA). Additional aid would be a credit-positive for state and local governments, given anticipated deficits in many places. The details of an additional stimulus package remain vague.1 However, the Democrats’ House-passed HEROES Act (passed in May 2020), included $500 billion for states and another $375 billion for local governments.2

Any new direct support for state and local governments is likely to be lower than the amounts proposed in the HEROES Act. A vaccination campaign is underway. Some of the aid outlined in the HEROES Act has been delivered through the CRRSA, and state revenues have healed faster than expected in many places. (Per the latest U.S. Census estimates, 13 of the 50 states collected more in taxes year-to-date through 3Q20 than through 3Q-19.3)

Direct support would most likely be delivered via the budget reconciliation process. Democrats still control the House with a 222-211 majority, albeit a slimmer margin than the 233-195 majority of the 116th Congress.4 They will control the Senate by the slimmest possible margin (51-50, including the Vice President’s tie-breaking vote). Existing stimulus provisions like enhanced unemployment payments and direct checks expire in March, but Senate Republicans may not agree to another round of COVID relief quickly. So additional state and local support may end up passing alongside other Biden-administration priorities in a contentious budget process.5 Traditionally, only one reconciliation bill can pass each year, but because no FY 2021 bill has been enacted, it’s possible that Democrats attempt it twice in calendar year 2021 (one for FY 2021 and another for FY 2022).

Credits facing large operating deficits are likely to benefit most from improved federal aid prospects. This includes cities with stressed downtowns, many states, hospitals, and mass transit obligors. The New York MTA will likely be a particular winner, at least in the near-term. The new Senate majority leader will be New York’s Chuck Schumer who is well positioned to ensure that any aid bill includes what the MTA needs.

Tax rates are now biased higher. During the campaign, candidate Biden proposed raising rates or expanding the base for most major federal taxes. This includes individual income, corporate, capital gains, dividends, payroll, and estate taxes, among others (Figure 1). Here, again, slim majorities in the House and Senate suggest that only some of President-elect Biden’s potential tax changes could become law. On balance, higher marginal tax rates should keep in place today’s supportive demand environment. Municipal/Treasury ratios are relatively low by historical standards (10-year at 74 ratios as of 1/5/20 per TM3), but higher tax rates could keep them in a modestly lower range for longer. 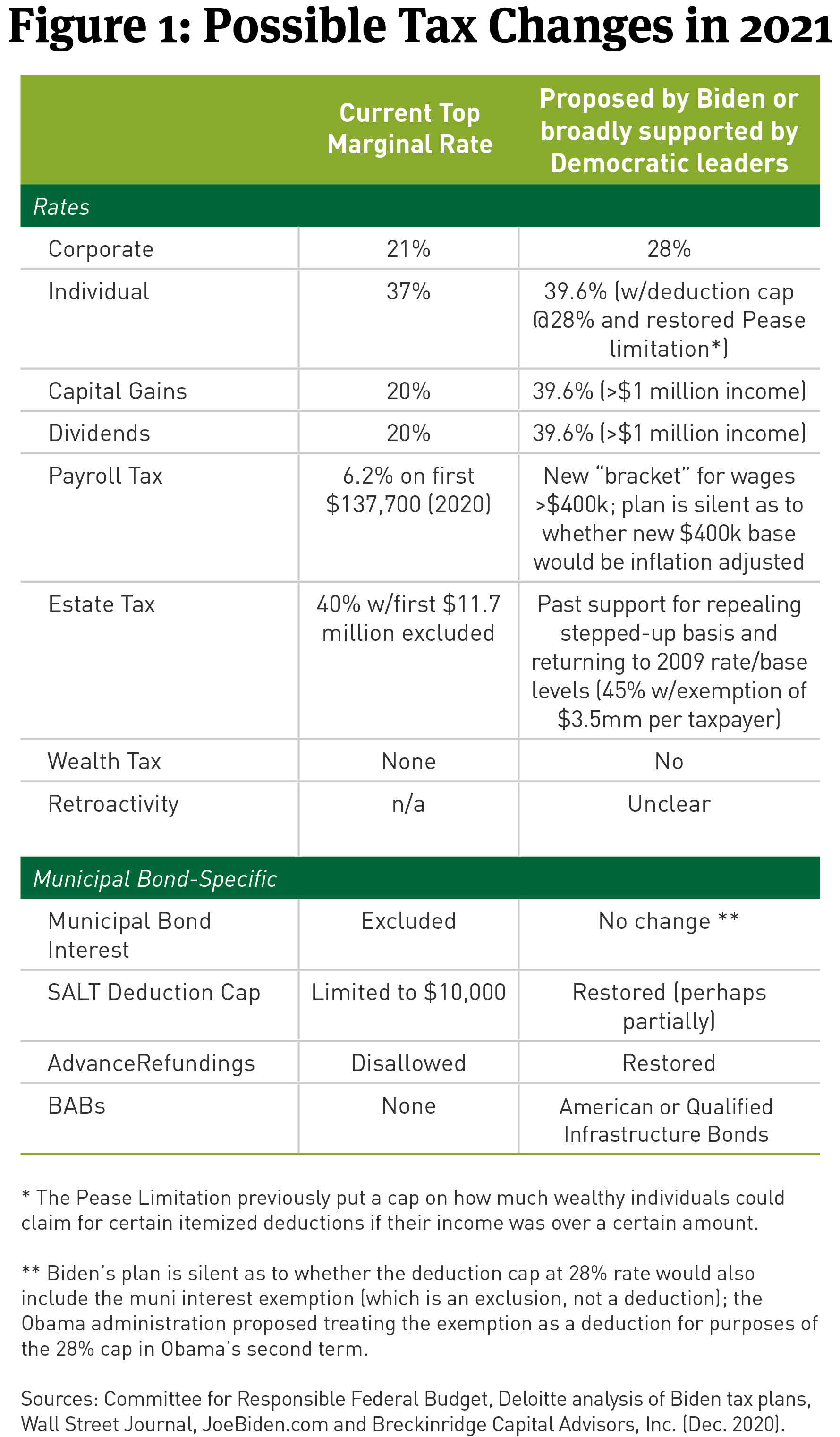 Away from rates, per se, some muni-relevant tax changes are possible. This includes repealing the $10,000 cap on the state and local tax (SALT) deduction and restoring advance refundings. The former could reduce the value of owning in-state bonds for municipal bond buyers in high-tax states.6 The latter could result in additional tax-free supply and fewer taxable advanced refundings in 2020. Congress may also expand private activity bond (PAB) eligibility or reintroduce a direct-pay bond structure along the lines of the 2009-2010 Build America Bonds program (see infrastructure section below). Tax changes are most likely to take shape via a budget reconciliation bill, as with aid to state and local governments.

Infrastructure policy changes, including restoration of a direct-pay bonds program, could materially change the market over the long-term. President-elect Biden has proposed $1.3 trillion in infrastructure spending over the next 10 years.7 It is one policy area in which both parties admit to seeing common ground.8 Conceivably, infrastructure spending is sufficiently popular to enable passage of some Democratic climate and stimulus initiatives without advancing a reconciliation bill (although that seems unlikely).

An infrastructure deal would likely include a reconstituted Build America Bonds (BABs) program. BABs are a type of taxable municipal bonds promulgated under the American Recovery and Reinvestment Act of 2009. They were well received by market participants in 2009 and 2010 before authorization for the program expired. Taxable municipal bonds reached over 35 percent of market issuance in 20109, largely attributable to BABs. Under BABs, the federal government subsidizes infrastructure costs by rebating a portion of an issuer’s borrowing costs to the issuer, rather than via excluding an investor’s interest payments from federal income tax. House Ways & Means Chairman Richard Neal is a strong supporter of BABs and other “direct-pay” taxable bond programs. Last year, direct-pay bonds were reintroduced in the Moving Forward Act as “Qualified Infrastructure Bonds.” A companion bill in the Senate was also introduced.10 Last January, Neal pushed for an infrastructure package, saying: “I want something really big, and I think Build America Bonds ought to be a place to start.”11

A new, permanent direct-pay bond program could potentially reshape the municipal market. A detailed discussion of the possibilities is beyond the scope of this blog, but as an initial matter, investors should be aware that a reliable supply of taxable municipals would likely cannibalize some of the tax-exempt market. In theory, ratios should be pressured even lower as tax-exempt interest payments become scarcer. Introduction of a permanent direct-pay bond structure would also invite new buyers into the municipal market, including untaxed pension funds, endowments, and foreign buyers. Liquidity would likely improve for all municipals as new sources of demand come on-line. The market’s average maturity would likely lengthen, as well. Institutional buyers tend to demand longer paper than the market’s existing retail buyer base, while issuers would like to finance long-lived infrastructure assets with long-dated obligations. We expect to monitor infrastructure-related developments closely in the coming year.

The new Congress is unlikely to eliminate the filibuster or invite Puerto Rico or the District of Columbia to become a state. Rhetoric around these possibilities picked up in Fall 2020 when it appeared Democrats might have gained substantial majorities in both chambers. That is not the case now. Thin majorities in the House and Senate make action on these items very unlikely, in our view.

[2] Jared Walczak, “How the HEROES Act Would Allocate State and Local Aid for Coronavirus Relief,” Tax Foundation, May 12, 2020. Available at: https://taxfoundation.org/heroes-act-state-local-aid/,

[6] Note that ending the cap on the SALT deduction should lower effective marginal tax rates for the very highest income taxpayers. However, the Biden administration may not propose a straightforward removal of the cap. Biden’s various tax proposals include capping the value of deductions at a 28% rate, a policy which could nullify removal of the SALT deduction cap for some taxpayers.

2021 Muni Market Outlook: To Immunity and Beyond!
By Adam Stern
Municipal credit will begin to heal in 2021 as the COVID-19 pandemic abates and the economy recovers. Adam Stern reviews the outlook for municipal bonds in 2021 and beyond in his annual analysis.
Update: Muni Credit and the November 2020 Elections
By Adam Stern
November’s election results have implications for municipal credit quality and valuations. Adam Stern analyzes the potential outcomes and effects.
The Importance and Influence of Bond Issuer Engagement
By Phillip Newell
Engagement with bond issuers is an essential element of our research process. A recent Wall Street Journal article highlighted the importance and influence of our engagement.