Bond markets are typically quieter during the summer months and August is no exception. New bond issuance slows, monetary policy makers pause and investors get a chance to look away from their screens.

It may be no surprise then that during this year like no other, August’s bond markets departed from tradition. New bond issuance was strong, and the Fed announced a substantial policy shift.

The Fed announced a major policy shift to "average inflation targeting," meaning that, after years of remarkably low inflation, it will be inclined to allow inflation to run higher than the standard 2% target before hiking interest rates. The attendant message was the reemergence of the lower-for-longer theme last heard after the Great Financial Crisis of 2008-2009.

In our view, the boost to economic growth from recent fiscal and monetary stimulus is likely to sustain markets into the fourth quarter, but a delay in new stimulus, high unemployment and the continued economic impact of the virus create challenges for economic and market fundamentals.

Municipal bond yields reached record lows early in the month before drifting higher. By month end, AAA general obligation bond yields were 3 and 4 basis points (bps) higher in the 2- to 6-year range compared with the prior month end, and were up 5 to 16bps in 7 to 10 years and 19bps higher from 11 to 30 years. AAA yields are below 1 percent out to 16 years.

Yields declined to new lows early in the month. M/T ratios followed them on a wild ride lower, particularly on the front end of the curve. 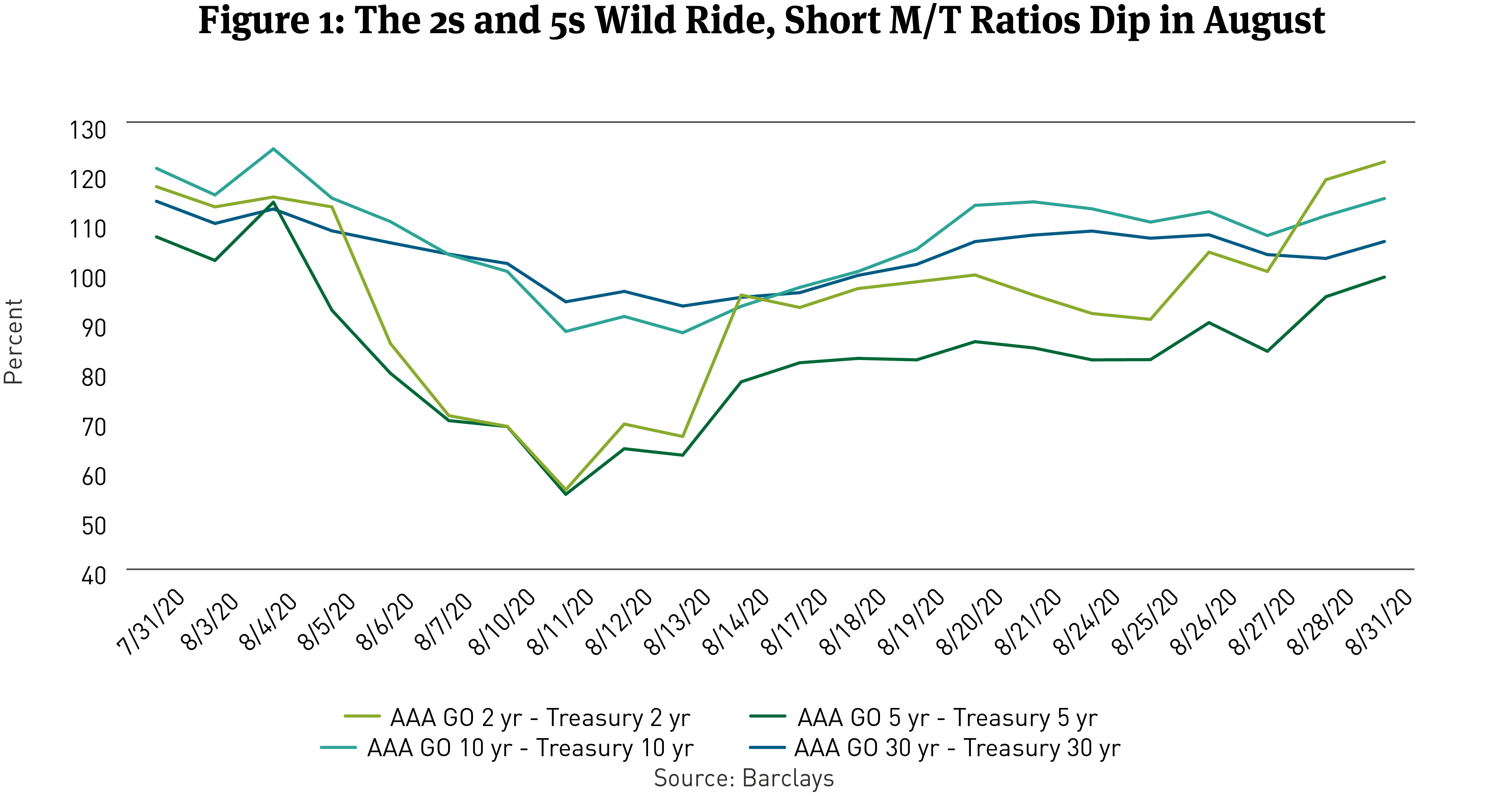 Municipal bond issuance in August totaled $41 billion, per The Bond Buyer, off about 4 percent compared with July but higher than the $39 billion issued in August 2019. Year-to-date gross issuance stands at $294 billion, almost 21 percent higher than the same period last year.

Taxable municipal bonds issued totaled $12 billion, pushing year-to-date taxable supply to $86 billion, per The Bond Buyer. As taxable municipals have become an increasing portion of the market, the market has seen the supply of tax-exempt municipals fall over 5% year-over-year, while municipal supply rose 21% over the same period. Through August 31, 2020, the year-to-date total return on the BBG Taxable Municipal Bond Index was positive 8.54 percent.

Demand was unwavering from municipal bond funds, with inflows averaging about $3 billion per week, according to Barclays. As of August 26, 2020, ICI data showed that fund inflows totaled $11 billion during the month, bringing year-to-date fund flows to $12 billion.

It appeared that Investors shrugged off concerns over credit fundamentals despite the challenges that were predicted because of declines in municipal revenues and delays in further monetary stimulus. Moody’s Investors Service, in its second quarter 2020 ratings revision report, noted that downgrades outpaced upgrades by a wide margin for the first time since the second quarter of 2017 and that pace is likely to continue through year end.

IG corporate bond fixed-rate gross supply of $161 billion was up 71 percent over the prior month and 75 percent year-over-year per Barclays. The third month of the Fed’s IG corporate bond purchasing program and purchases by foreign entities supported prices as well. The Fed on August 31 held over $13 billion in corporate debt and exchange traded funds. IG funds reported about $32 billion of net new flows in August, per EPFR, below July’s tally of $65 billion. 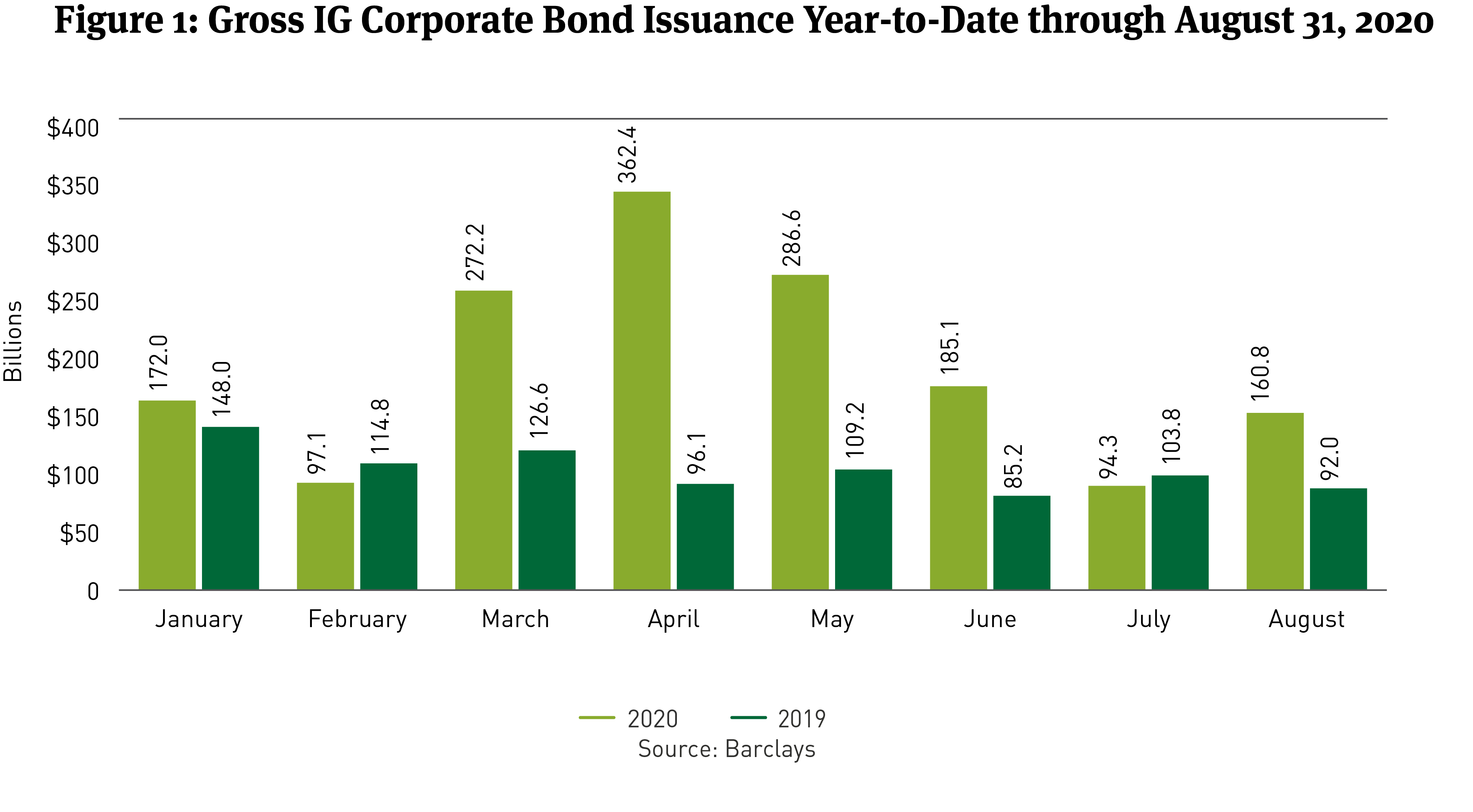 The double-whammy impact of more debt layered onto lower earnings is driving IG leverage higher year-to-date. Ratings downgrades continue to occur at levels comparable to the Great Financial Crisis, per Moody’s and S&P. Offsetting trends including reductions in dividends and share buybacks as well as delayed capital spending are favorable to bondholders.

In the coming months, we see companies reducing dividends, slowing capital expenditures and cutting share buybacks, all strategies to protect balance sheet strength. We expected downgrades to outpace upgrades and fallen angels—ratings slipping from IG to high yield—to be elevated.

MBS modestly outperformed Treasuries on a strong demand technicals tailwind. Prepayment risks were elevated due to all-time low mortgage rates and delinquent loans being bought out of pools. Spreads provided somewhat higher relative value versus other sectors. Volatility was driven relentlessly lower thanks to the Fed’s QE. We expect carry rather than spread tightening to be the key contributor to mortgage total return performance going forward.