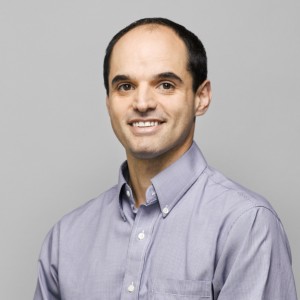 On January 30, the U.S. federal court overseeing Puerto Rico’s debt restructuring issued a ruling that may weaken the legal support for a subset of municipal securities known as “special revenue” bonds. In general, special revenue bonds are those backed by utility revenues, dedicated taxes or other dedicated payments and issued by a Chapter 9-eligible entity like a city, school district or special district government.1 Special revenue bonds often receive superior treatment to other bonds in Chapter 9 bankruptcy.

It is the first decision stemming from Puerto Rico’s insolvency that has meaningful implications for mainland credit quality.

The ruling surprised many market participants, and in our view it is the first decision stemming from Puerto Rico’s insolvency that has meaningful implications for mainland credit quality. While the near-term impact of the decision is likely to be modest, it could have long-term implications. Currently, few special revenue issuers exhibit credit stress, and the decision may be overturned on appeal. However, special revenue bonds may constitute up to 35 percent of the $3.8 trillion municipal bond market.2 If the ruling proves lasting, it could trigger ratings downgrades, alter municipal investment strategy at some firms and compel legislative fixes, among other actions.

In this piece, we summarize the recent court decision arising from a bond default by the Puerto Rico Highways and Transportation Authority (PRHTA). We believe it potentially poses long-term risks for special revenue investors.

The ruling concerns special revenue bonds issued by the PRHTA, which were secured by a lien in tolls, motor fuels taxes and other transportation-related revenues. Puerto Rico enacted a restructuring plan that redirected these revenues away from bondholders and toward other Commonwealth priorities. Creditors, represented by bond insurers, alleged that the plan misappropriated funds owed to them.3

Provisions in the law that governs Puerto Rico’s insolvency suggested the insurers had a strong argument. The Puerto Rico Oversight, Management and Economic Stability Act or “PROMESA,” exempts special revenue bond payments from the automatic stay (which halts creditors’ debt collection efforts), and specifies that liens in special revenues remain in force after a bankruptcy filing.4 These provisions are identical to those in Chapter 9, and they have ensured timely payment on each special revenue bond in every municipal bankruptcy since 1988; that year, Congress added the special revenue language to the bankruptcy code.5

The court ruled that special revenue payments can be withheld from PRHTA bondholders.

The ruling increases risks for municipal investors.7 If it is upheld, and bankrupt municipal issuers can withhold pledged special revenues from investors, then negotiating leverage for bondholders in Chapter 9 likely decreases. Notably, if special revenue investors are merely owed the present value of their claim, the risk of lower-than-expected recoveries should grow. Present value determinations would likely be based on projections of future pledged revenue and operating expenditures, and would require choosing a discount rate on which to value those flows. These estimates are often subject to uncertainty.8

Did the Court Err?

For several reasons, those familiar with municipal bankruptcy law believe the court’s decision is in error.

Rationale for the Court’s Decision

Despite precedent and the legal history outlined above, the ruling is not entirely out of bounds. This is true for at least three reasons.

The PRHTA decision injects a bit more uncertainty into a broad portion of the municipal market. We estimate that special revenue bonds constitute between 20 and 35 percent of total municipal bonds outstanding. The high end of the range includes bonds issued in states that presently do not authorize Chapter 9 filings, as well as some larger issuers that may not qualify as a “municipality,” which is a prerequisite for Chapter 9 (Figure 2). 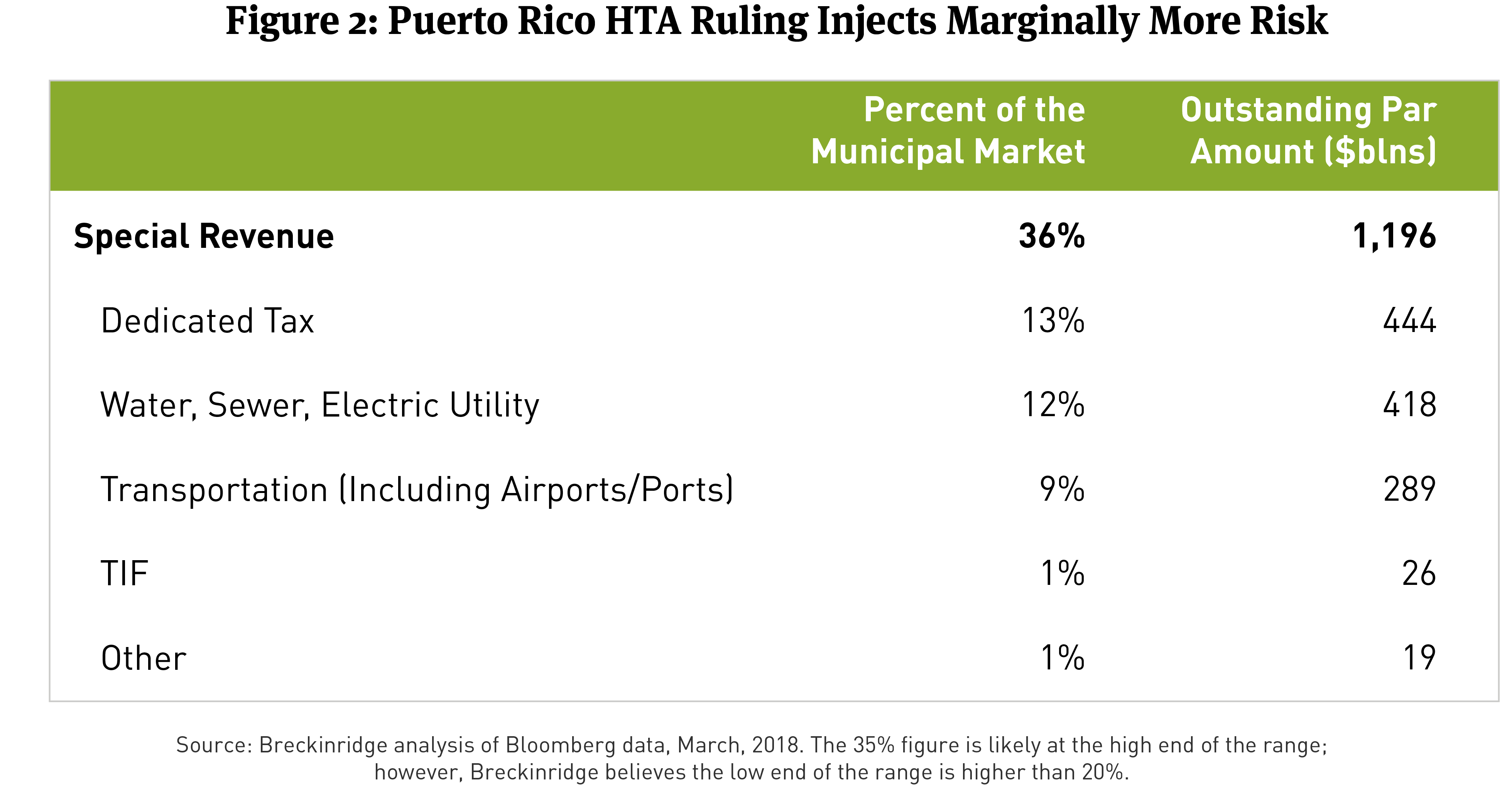 Still, if upheld on appeal, the ruling would leave a taint that could:

What’s Next for the PRHTA?

Absent a settlement, the appeals court is likely to decide the PRHTA case in late 2018 or early 2019. The best outcome for municipal investors would be a reversal. Overturning the decision would provide additional precedent (over and above the Jefferson County case) for the proposition that special revenue bonds must be paid during a bankruptcy.

However, if the appeals court affirms the PRHTA decision, lawmakers at both the state and federal level might act. Notably, several states have passed new protections for municipal bondholders in recent years. States have proactively sought to maintain access to capital in the wake of municipal distress in California, New Jersey and Rhode Island, among other states (see The Changing Status of Statutory Liens). This behavior suggests that states would take steps to protect special revenue bonds even if the PRHTA ruling is upheld. States could pass statutory lien or trust legislation, or create special purpose entities for collection and payment purposes.

Congress might also act. The special revenue provisions were written in 1988 to protect issuers’ access to non-recourse financing nationwide. Notwithstanding today’s Congressional gridlock, if a federal court upends the ability of states and local governments to access non-recourse financing, Congress seems likely to eventually revise the bankruptcy code.

Breckinridge will continue to monitor developments in the PRHTA case and in Puerto Rico more broadly. Current market conditions warrant limited concern. But if upheld, the ruling’s impact could weaken fundamentals for the special revenue sector. The case has potentially broad long-term implications for mainland credit quality and market intermediation.

[2] Breckinridge estimate based on an analysis of Bloomberg data in March 2018.

[4] 11 USC 922(d) and 928(a) outline special revenue lien protections. This treatment is superior to that of other secured obligations. Usually, the automatic stay operates to halt claims for payment during a bankruptcy, and liens fall away when an issuer files. 11 USC 362(a)(4) and 11 USC 552(a).

[5] Fitch Ratings, “What Investors Want to Know: The Impact of the Puerto Rico Ruling on Special Revenue Debt,” February 14, 2018.

[7] While not binding on mainland bankruptcy courts, the decision is likely to be cited by attorneys in future municipal insolvencies as legal confirmation that special revenue obligations need not always be timely paid.

[14] 11 USC 904 says “notwithstanding any power of the court, unless the debtor consents or the plan so provides, the court may not ... interfere with … any of the property or revenues of the debtor… ”.

[15] This latter reading gives effect to the special revenue provisions as a matter of statutory construction. If the court’s view is correct, it is unclear why the special revenue language is needed at all, as an issuer can always choose whether to pay an obligation under section 904. Note that in the bankruptcies of Vallejo, Stockton and San Bernardino (all in California), the cities paid pensioners in full, in part because section 904 permitted it. This was the case even though other unsecured obligations received far lower recoveries.

[16] David Dubrow, Chapter 9 Revisited: Preparing for the Next Downturn, Pratt’s Journal of Bankruptcy Law (April/May 2016). Also, note that Fitch Ratings and other market participants never completely bought into the idea that section 11 USC 922(d) mandates turnover of special revenue funds. These observers and investors merely believed that Chapter 9 provides bondholders with enforcement rights if pledged revenue was withheld. Under this construction, special revenues are always very likely to be paid because there is no incentive to withhold them. “What Investors Want to Know: The Impact of the Puerto Rico Ruling on Special Revenue Debt,” Fitch Ratings, February 14, 2018.

[18] “Has Special Revenue Bond Protection Been Turned on its Head,” Kroll Bond Rating Agency, February 12, 2018 and “What Investors Want to Know: The Impact of the Puerto Rico Ruling on Special Revenue Debt,” Fitch Ratings, February 14, 2018.

Municipal supply has been running very high. Why is this happening?

While clean energy is a growing priority for many states, some electric utility customers may not be willing to pay higher bills.