Treasury yields were anchored at low levels, especially as inflation expectations declined. Stronger-than-expected economic data suggested that the Fed’s policy support and the CARES Act fiscal stimulus were sustained positives. Several of the Fed’s lending programs, scheduled to expire at the end of September, were extended to year end. The beneficial effects of stimulus appeared to be waning and prospects for a new round of stimulus faded as the election approached.

Risk assets sold off in September due to a rise in COVID-19 cases, valuation concerns, and election uncertainty. While the unemployment rate dropped, claims flattened at elevated levels. In our view, fiscal stimulus likely pulled third-quarter growth forward from the fourth quarter. Expectations for third-quarter gross domestic product (GDP) were in the 30-percent range, according to consensus opinion. The consensus outlook for the fourth quarter, however, was less positive, as many analysts pared their estimates as September closed. Household spending power should decline without stimulus checks. The election remains a wild card, with concerns about contested results emerging.

After setting record lows in August, yields across the curve were rangebound in September. Over the quarter, front-end yields fell approximately 3 basis points (bps) while longer maturities increased approximately 5bps. 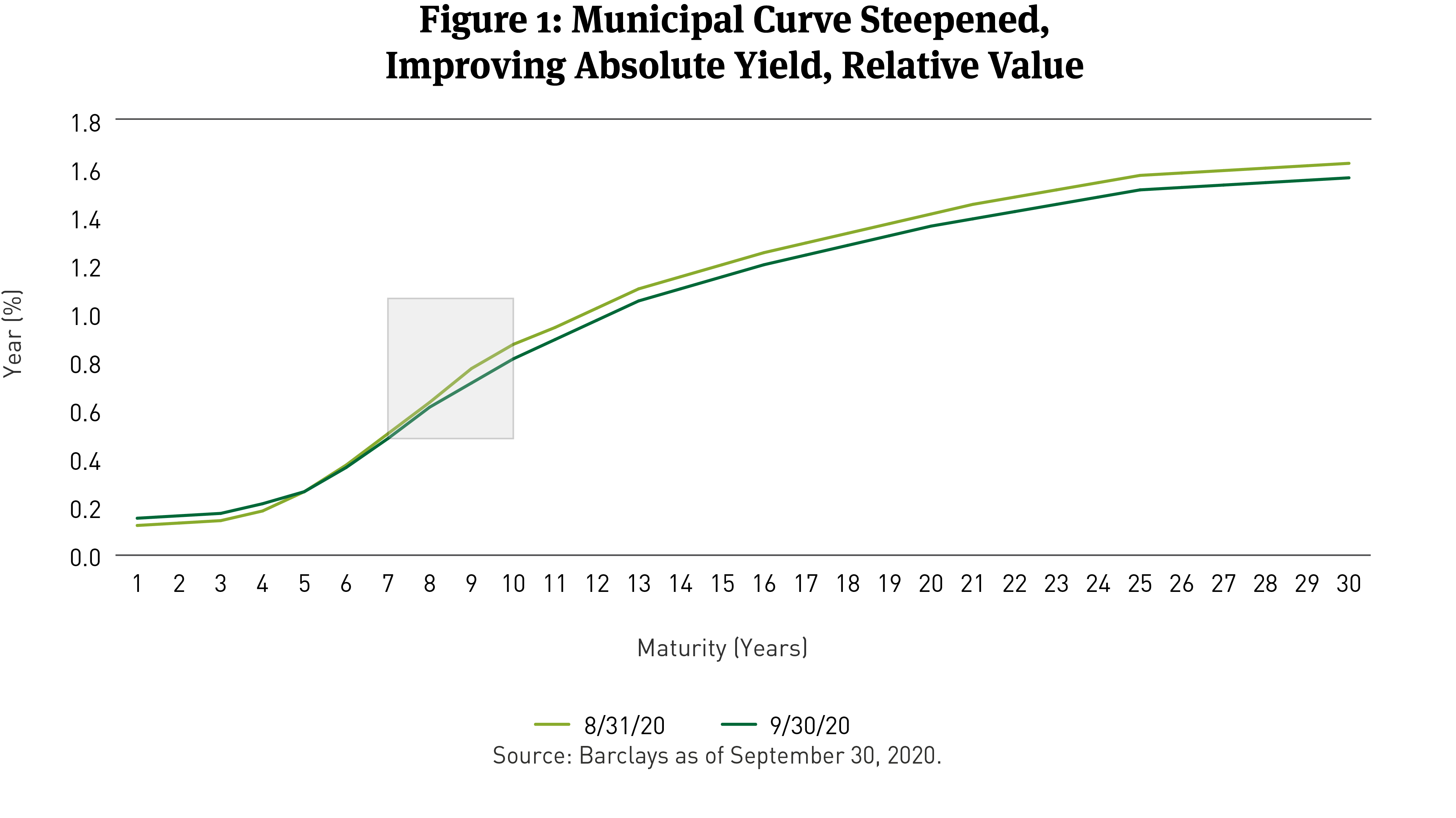 Gross supply grew, with $47 billion issued in the month, the highest issuance for September on record and the fourth consecutive month of more than $40 billion in supply, per data from The Bond Buyer. Taxable municipal issuance surpassed $16 billion during the month. Taxable municipal bonds issuance year-to-date through September 30 exceeds $102 billion, up 200 percent. Municipal bond mutual fund inflows were positive in the month and year-to-date, returning to levels that preceded the market turmoil in March.

Some municipal revenue sectors continued to show signs of stabilization at lower ratings levels, including toll roads, dedicated tax bonds, and hospitals. Urban area credits are showing more signs of credit deterioration as winter approaches and density becomes a larger issue for urban retailers, restaurants, and entertainment venues in major cities, including New York City and Chicago. We consider the near-term outlook for all credits to be highly dependent on the course of the virus and federal aid. The best-case scenario is no material uptick in caseloads and a federal aid package over the next six months. The worst case would be the opposite. Near-term caution is warranted but, higher taxes are almost certain, in our estimation, which would be supportive for municipal bonds.

The BBG Corporate Bond Index fell 0.29 percent for the month. Performance is positive year-to-date at 6.64 percent. According to Barclays, the best-performing sectors were airlines, financial companies, paper, transportation, and building materials. The worst-performing sectors were oil field services, refining, independent energy, midstream energy, and sovereigns.IG corporate supply remained healthy. In September, $172 billion priced. On a year-to-date basis, and due primarily to the record second quarter issuance of $761 billion, IG supply finished at $1.67 trillion at the end of September, up 67 percent year-over-year, per Bloomberg estimates. IG funds reported about $28 billion of net new flows in September, per EPFR, slightly below the August tally of $32 billion.

The Fed began purchasing individual IG corporate bonds in June. At the end of September, the Fed held about $13 billion of bonds and exchange-traded funds. While the strength of the corporate bond market may have allowed the Fed to take its foot of the gas recently, its intervention and ability and willingness to do more should continue to support IG spreads.

Rating agencies have responded to the precipitous drop in corporate earnings announced during the third quarter by downgrading credit ratings. As we look ahead to third-quarter earnings reports, downgrades are likely to continue, with agency rating outlooks biased negative. We expect downgrades to outpace upgrades and fallen angels—ratings slipping from IG to high yield—to be elevated.

On the positive side, issuers materially reduced discretionary share buybacks and increased cash liquidity in the second quarter. Overall, while corporate credit fundamentals remain weak, a renewed focus on balance sheets should stabilize leverage prospectively albeit at a higher level than in prior recoveries. Spreads are in a tight range, but volatility may pick-up around the election, potentially creating investing opportunities.

MBS spreads widened during September, as prepayments continue to surprise to the upside and heavy net supply weighs on the sector. The sector modestly underperformed Treasuries with negative 14bps excess returns, leaving year-to-date excess returns at -52bps. Net supply is on pace to reach $400 billion, which could mark the highest level since the 2008 to 2009 timeframe, per Bank of America Merrill Lynch. With mortgage rates at all-time lows, 1.5% coupons are being produced for the first time ever.

ABS outperformed Treasuries in September and year-to-date excess returns is positive 70bps. The hunt for yield in the front-end combined with lower supply (credit card issuance down 40 percent) has compressed spreads and relative value versus other sectors. While ACMBS lagged Treasuries by 13bps, non-agency CMBS generated 28bps of excess returns.

Breckinridge Marks a Decade of ESG Integration in 2021
By Peter Coffin
As our experience and insights related to ESG investing have advanced, so to has the industry’s. Peter Coffin reflects on the past decade of ESG integration at Breckinridge.
April 2021 Market Commentary
In April, Treasury and municipal yields moved lower even as market trends and economic data were positive.
February 2021 Market Commentary
Bond investors welcomed higher yields and a steepening yield curve during February.