Treasury yields moved higher as the curve steepened during the month. Investors appeared to anticipate a so-called Blue Wave favoring Democrats in the November 3 elections and waited for word on additional economic and fiscal policy stimulus. A more risk averse sentiment characterized markets as the month wore on due to a worsening trend in COVID-19 cases.

First estimate of third-quarter gross domestic product (GDP) growth from the Bureau of Economic Analysis hit the expected 30 percent range on a quarter-over-quarter basis. Enthusiasm for the bounce back in economic activity was tempered by rising rates of COVID-19 infection and deaths, and a dour outlook for the path of the pandemic in the near term.

We are cautious in our recovery outlook. The defensive posture of our portfolios positions them well for the period ahead, in our view.

Despite absorbing multiple weeks of heavy supply, yields remained in a tight range rising by 4bps in the 5-year maturity and by 6bps and 9bps in both the 10-year and 30-year spots. A curve-steepening trend persisted for most of the month with the 5-year-to-10-year slope hitting 68bps, a multiyear high, but long-end outperformance at month-end reversed the trend as the curve flattened modestly.

Municipal/Treasury Ratios were higher by more than 33 ratios at the two-year maturity to 137 percent. They were broadly lower across the remainder of the curve, ending the month at 79 percent for the 5-year maturity, 109 percent at 10 years, and 106 percent at 30 years, outperforming Treasuries on the long end of the curve.

Gross supply grew again, with $65 billion issued in the month, per The Bond Buyer. It was the second highest issuance month ever in October, trailing only the nearly $70 billion in December of 2017. Issuance of municipal bonds is on pace to exceed the previous record reached in 2017 (See Figure 1). That was just before tax law changes eliminated advanced refundings. 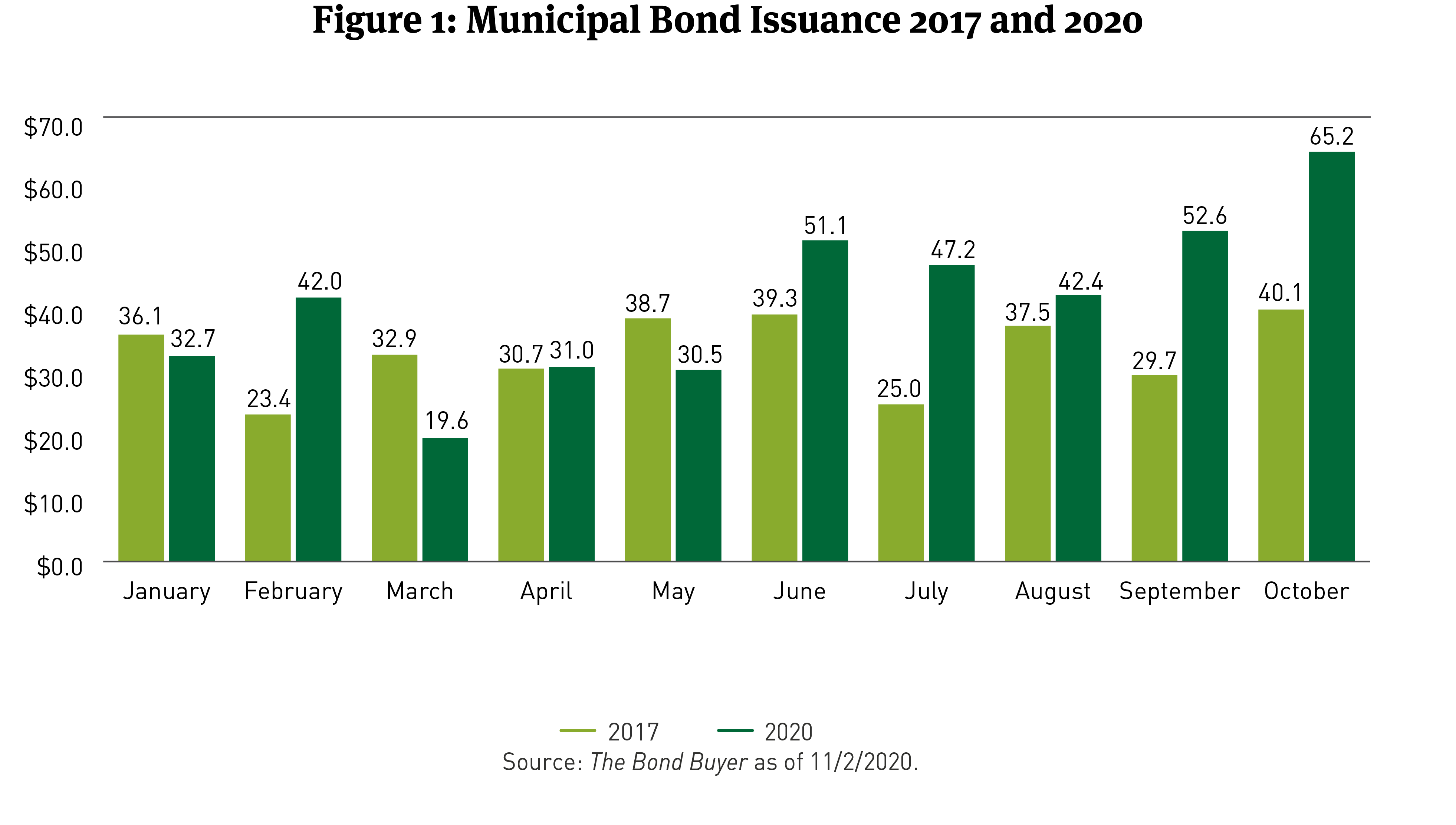 Lipper reported combined weekly and monthly inflows of $582 million for the period ending October 28. Fund flows have reached $26 billion year-to-date, a strong rebound from the $20 billion in outflows as of mid-May. By comparison, fund flows were about $76 billion last year for the same period, according to ICI data.

We exercised restraint as yields, particularly in the belly of the curve—the 3- to 7-year sector—did not offer a compelling relative value opportunity to us during August and September. During October, we extended into a modestly steepening yield curve with elevated supply, capturing higher yields while maintaining yield curve and duration positioning consistent with the index.

While near-term caution is warranted in regard to municipal credit, higher taxes at either the state, local or federal level, and decreased new-issue supply over the near term should be a positive for municipal bonds.

While IG spreads historically are impacted by Presidential elections, mean reversion has occurred relatively quickly in the past. In the last five elections, spreads widened in three and tightened in two. On average, about a month and a half after the elections, spreads returned to pre-election levels, based on data from CreditSights, Intercontinental Exchange and Bank of America Merrill Lynch.

IG corporate supply dipped in October from the elevated levels in prior months. Index-eligible IG issuance was $108.2 billion, down about 44 percent from the monthly average year-to-date, according to Barclays. Due to earnings blackouts, October is typically a slower month for issuance. On a year-to-date basis, IG supply finished October at $1.94 trillion, which is already a record and up 50% over 2019’s full year tally. IG funds reported about $25 billion of net new flows in October, EPFR reported, lower than the September total of $36 billion.

The Fed continues to back stop the corporate bond market with purchases in several sectors, including direct purchases of corporate bonds and exchange traded funds through the Secondary Market Corporate Credit Facility. The actions supported narrow spreads and corporate bonds outperformed Treasuries and equities for the month.

On October 30, FactSet Insights reported, the percentage of S&P 500 companies beating earnings per share estimates for the third quarter and the magnitude of the earnings beats are at or near record levels. “The index is still reporting the third largest year-over-year decline in earnings since Q3 2009,” the report continued.

While rating outlooks are biased negative, IG downgrades may have peaked in Q2 as they slowed notably in Q3. That is partially due to steps companies have taken that are intended to strengthen balance sheets, such as sharply reducing share buybacks and boosting cash liquidity. Both actions favor credit and bondholders. Overall, while corporate credit fundamentals remain weak, as is typical of periods of economic stress, a renewed focus on balance sheets should stabilize leverage prospectively albeit at higher levels than in prior economic recoveries.

In MBS, the Fed added 30-year 1.5 percent coupons to its purchase schedule; the announcement helped lower coupon returns over the month. MBS produced 12bps of excess returns in October. Market analysts’ estimates for gross and net MBS supply continued to move higher, which speaks to how quickly housing is evolving in response to shocks caused by the pandemic. ACMBS and ABS both outperformed over the month with excess returns 31bps and 9bps, respectively.

Master Class: Bond Yields
By Jeremy Jenkins
Fixed-income market participants often quote the term “yield,” but the word’s context could be misunderstood because various types of yield exist and each is calculated differently.
April 2020 Market Commentary
Markets rebounded from their steep March declines, as the disparity between market sentiment and economic data continued to grow.
From Peter Coffin – A Perspective on the Current Market
By Peter Coffin
Hear from our President, Peter Coffin, on the disorder in the current investment grade bond market.