Financial markets in November appeared to be caught in a tug-of-war between rising COVID-19 cases and positive vaccine news, while election-related issues persisted throughout the month. The stock market, as measured by the S&P 500 Index, gained. Treasury yields moved marginally lower and the curve flattened at the long end.

Investors appeared to project current favorable news into next year, while discounting as best they could near-term concerns about the pandemic and politics. We remain cautious in our growth outlook. As year-end approaches, pandemic‐era emergency programs will expire: The Pandemic Emergency Unemployment Compensation program and five of the Fed’s pandemic credit facilities. We are monitoring the effect that these and other factors in the absence of near-term stimulus could have on bond supply, credit conditions and Q1 economic activity.

Lighter November new issuance and continued strong demand supported a rally in municipal bond prices as yields neared the historic lows set in August 2020. Over the month, yields dropped substantially more in longer maturities, causing curve flattening across the board. The 2s10s and 5s10s curves flattened by between 14 and 15 basis points (bps) to 57bps and 49bps, respectively.

Municipal outperformance pushed Municipal/Treasury (M/T) ratios to extreme lows, plunging below 100% across the curve. Based on Bloomberg data, the 2-year plummeted more than 40 ratios, hitting 90 percent, before settling at 102 precent at month end. The 5-year approached the year-to-date low of 55 percent, but closed at 63 percent, while 10-year and 30-year ratios finished at 85 percent and 91 percent, down 23 and 16 ratios, respectively. 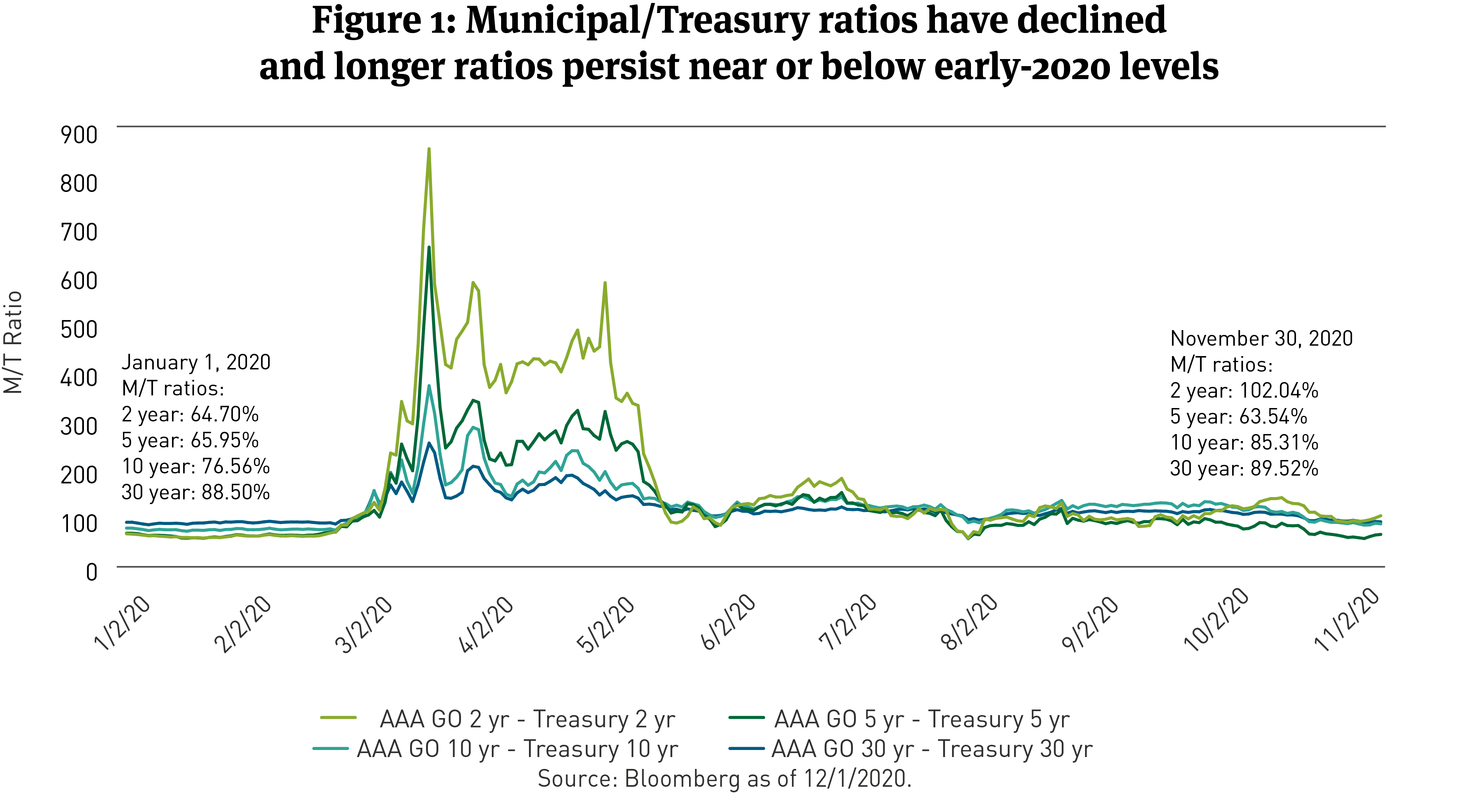 The Bond Buyer reported November municipal bond issuance of $19 billion, marking a 74 percent decline from the prior month. Despite the supply drought, gross supply year-to-date through November topped $440 billion, with more than $135 billion in taxable municipal bonds, and is on pace to exceed 2017’s supply record, per The Bond Buyer.

Despite rising COVID cases, state revenues have exceeded expectations in some cases, especially after dire predictions following the pandemic’s outbreak. Certain revenue sectors may see improving performance, as positive vaccine news leads to optimism, and we increased our allocations to several of these sectors. Although its utilization since introduction was low, the termination of the Fed’s Municipal Liquidity Facility may be a negative for some lower-rated municipal issuers.

With taxable municipal bonds continuing to comprise a substantial portion of the 2020 municipal market—more than 30 percent of combined tax-exempt/taxable issuance—we continued to leverage our experience in that segment of the market in an effort to identify investment opportunities, particularly as the tax-exempt rally in the month affected relative values. From a maturity perspective, we exercised caution, particularly in the 5-year range, as the rally pushed yields and ratios sharply lower.

The BBG U.S. Corporate Investment Grade Bond Index gained 2.79 percent for the month. Performance year-to-date is 9.41 percent. According to Barclays, the best-performing industries for the month—those where spreads narrowed most—were in the energy sector, led by refining, oil field services and independent energy. The worst-performing industries were consumer products, construction machinery and pharmaceuticals.

Index-eligible IG corporate supply was $84 billion, slightly less than the same month in 2019. With the record amount of issuance year-to-date, the Corporate Bond Index has grown by $650 billion, per ICE. IG funds reported $15 billion of inflows in November, per EPFR, below the $45 billion in October. IG fund inflows were $267 billion year-to-date through November.

During much of 2020, particularly after the onset of the pandemic prompted business restrictions, we have seen many corporate issuers take prudent steps to strengthen their balance sheets. They have reduced share buybacks, adjusted dividend payouts lower and boosted cash liquidity.

Balance sheet cash remains high as demonstrated by the largest gap between gross (3.50 times) and net (2.78 times) leverage since at least 1998, per Bloomberg. The gap between A- and BBB-rated issuer gross leverage has closed notably, although A-rated issuers typically carry more cash and have higher profit margins. While credit fundamentals are challenged, in our view, bondholder-friendly activity is stabilizing debt leverage and prospects for a profit recovery next year would help as well.

During November, we extended corporate duration in intermediate strategies. Relative to respective benchmarks, where duration also extended, our portfolios’ duration and curve positioning remain near neutral.

Based on Barclays index data, MBS ended November essentially flat on an excess return basis. The MBS coupons directly supported by the Fed’s market participation—those with relatively lower coupons in the 1.5 percent to 2.5 percent range—outperformed Treasuries. MBS coupons that underperformed were those currently not purchased by the Fed, specifically those with coupons in the 3 percent to 4 percent range.

Agency commercial mortgage-backed securities (ACMBS) was the best performing securitized sector, for the month generating 37bps of excess returns. Year-to-date through November, ACMBS outperformed non-agency CMBS by 100bps, despite the rally in riskier assets over the last two quarters.

Asset-Backed Securities (ABS) modestly outperformed over the month, earning 11bps. With year-to-date excess return of 90bps, ABS is the best performer in the high-quality securitized sectors. Autos have led the way with 100bps of excess returns year-to-date compared to credit cards at 71bps.

May 2020 Market Commentary
Markets continued to advance in May, as a risk-off environment, Fed intervention and investor sentiment all supported gains.
June 2021 Market Commentary
Credit fundamentals were a positive for the municipal and corporate bond markets in June.
A powerful conversation between our CIO and CEO of Girls Who Invest
Former CIO Laura Lake and GWI's CEO Janet Cowell, discuss their paths in the industry and why this organization is important.