Counterbalancing forces affected all markets in May. Offsetting positive effects of continued fiscal stimulus and economic reopenings were inflation concerns and some disappointing employment data. With little to tip sentiment conclusively either positively or negatively, a sense of inertia characterized the environment.

Businesses and individuals benefited from continuing fiscal stimulus, particularly the Consolidated Appropriations Act passed in December 2020 and the American Rescue Plan passed earlier in 2021. Proposed additional spending was emerging in infrastructure bills and, at the end of the month, the Biden administration’s $6 trillion budget. Second quarter data and full-year estimates for gross domestic product remained strong.

Also feeding a sense of unease was somewhat lackluster April employment data and a leveling of vaccinations, as states began to ease pandemic-related restriction ahead of the summer season.

During May, Treasury yields slipped lower in most maturities. The 10-year Treasury yield closed May at 1.60 percent, off 3bps from April’s 1.63 percent close.

Municipal bond yields increased marginally in the 2- to 5-year range, were unchanged at 7 years, and declined 6bps at 10 years, per Bloomberg data (see Figure 1). The broad Bloomberg Municipal Bond Index was up 0.30 percent, narrowly underperforming the Bloomberg U.S. Treasury Index, which was up 0.34 percent. 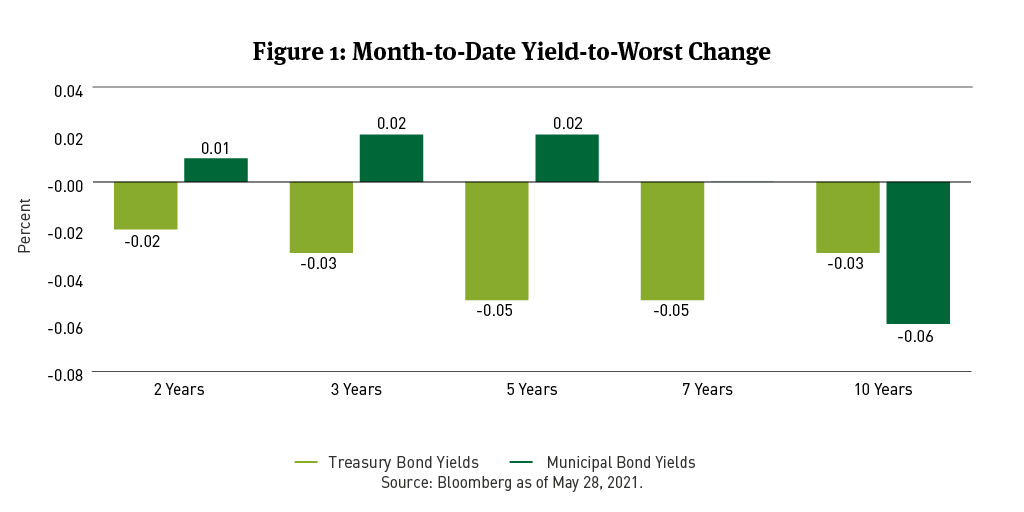 The 2s5s curve steepened while the 2s10s and 2s30s curves were 2bps and 7bps flatter, respectively (see Figure 2). Municipal/Treasury (M/T) ratios increased in short- to intermediate term maturities, with the largest increases occurring in the short-term segment of the curve. Ratios closed May at 60 percent, 62 percent, and 66 percent at the 5-, 10- and 30-year maturities, respectively (see Figure 3). 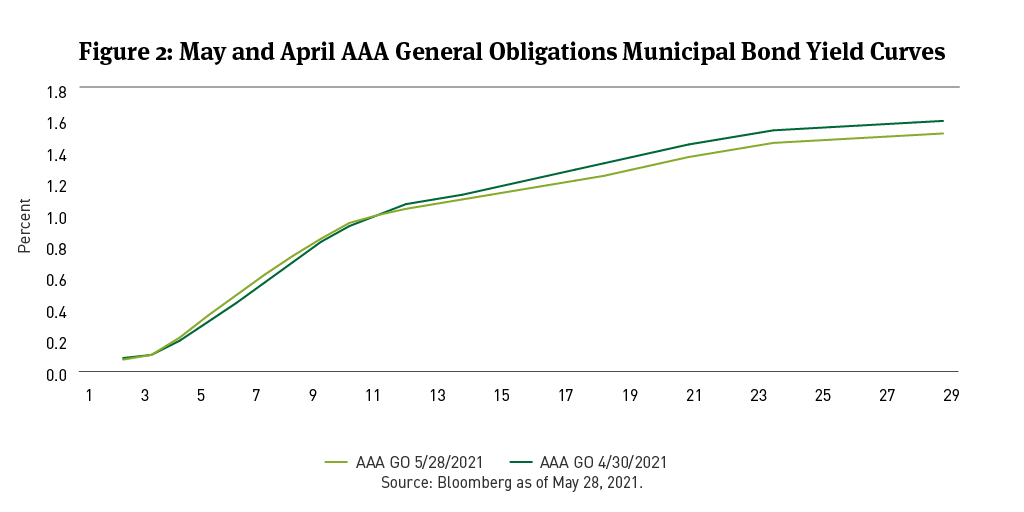 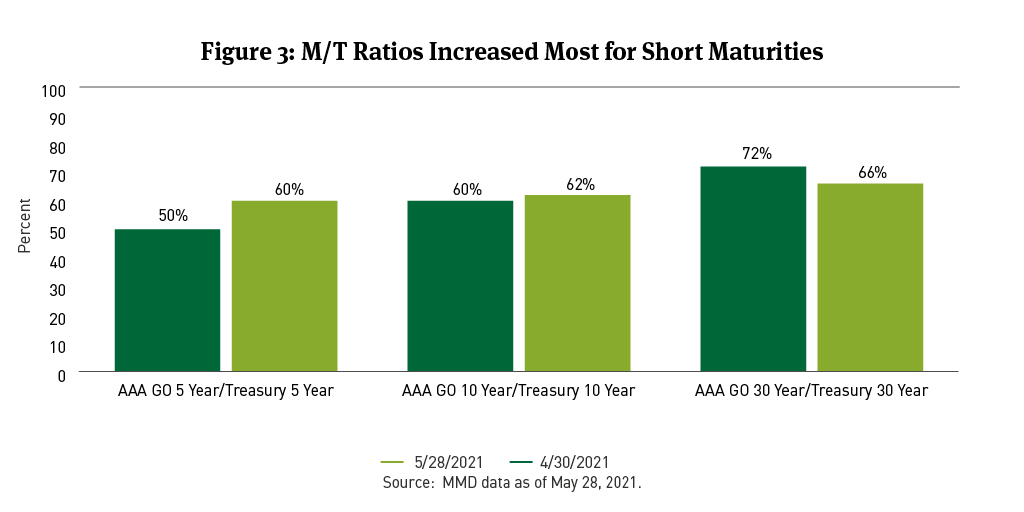 Supply and demand technicals supported the market. According to The Bond Buyer, during May 2021 tax-exempt and taxable municipal new issuance were lower by a combined $7 billion or 23 percent compared with 2020. Continuing a trend dating back to passage of the Tax Cut and Jobs Act of 2017, taxable municipal bonds continued to comprise about 20 percent of total issuance.

Demand in May was strong. Mutual fund inflows exceeded $3.6 billion for the month and total more than $48 billion year-to-date, per Bloomberg.

The Biden administration released its proposed $6 trillion budget, which included spending proposals, that could tend to increase municipal bond supply. The budget overall proposes a net increase of $2.4 trillion in taxes over 10 years. Proposals include a corporate tax hike to 28 percent and raising the top individual tax rate to 39.6 percent. Increased taxes, if enacted would logically serve to heighten demand for municipal bonds due to the tax benefits.

Throughout May, we continued to be selective when engaging in the primary or new issue market, where competitive bidding tended to push prices higher and yields lower. We continued to look for opportunities to capture value in the secondary market among bonds being traded in the secondary market that we considered to be relatively better value than those available in the new issue market.

Bloomberg’s investment grade corporate indices showed that BBB-rated bonds generally outperformed other higher-rated bonds in the investment grade category on both a total return and excess return basis. Corporate bonds with 5- to 10-year maturities earned higher total and excess returns relative to shorter maturities, second in performance only to bonds in the long corporate segment of the index.

We continue to view credit fundamentals as positives for the IG market. Earnings have been growing and should drive credit metric improvement across most sectors. Spreads are notably tight by historic standards, although higher-quality IG asset classes offer even less spread and IG corporates benefit from foreign demand as Europe and Japan yield spreads are lower. Technical conditions are market neutral in our view.

During the month, MBS prepayment speeds slowed, as mortgage rates increased, according to government-sponsored entities. Despite continued robust supply, Fed MBS purchases overwhelmed the demand side of the equation, keeping spreads near historically tight levels. Net issuance is already over $315 billion so far in 2021. Strong first quarter and record-breaking April issuance pushed year-to-date total 2021 net issuance to 62 percent of 2020’s total in just four months, based on data from federal mortgage agencies.

The Fed has been buying an average of $6 billion of mortgage bonds per day, as total aggregate purchases reached nearly $2 trillion since March 2020. During two prior QE operations, final MBS purchases tallied $1.35 trillion and $1.4 trillion.

With housing prices rising at the fastest pace since 2006, the housing market appears to have recovered. As speculation increased during May about the end of the current QE operation, Boston Federal Reserve Bank President Eric Rosengren pointed out that mortgage bonds are an obvious candidate for tapering before Treasuries.

Per Bloomberg index data for May, agency CMBS and nonagency CMBS each earned a 37bps excess return. MBS delivered an excess return of negative 36bps. Within the ABS segment, excess returns were 15bps for credit card-backed issues and 11bps for auto loan-backed bonds.