For hockey fans, a player completes a “Gordie Howe Trick” by scoring a goal, making an assist and getting into a fight, all in one game. No wonder these players can quickly become fan favorites, as they not only help their team on the scoreboard, but also prove their mettle as amateur boxers. However, it’s not always possible to have strong performance and tense conflict at the same time, as evidenced by equity market returns in May. As a conflict on the global stage – the U.S.-China trade war – escalated over the month, the S&P 500 declined 6.6 percent, which is the worst May return in seven years, per Bloomberg. The Bloomberg Barclays High Yield Index excess return was -2.5 percent, also indicating weakness in higher-beta assets. Option-adjusted spreads widened 18 basis points (bps) in IG corporate bonds.1 Political uncertainty in Europe and the U.K. also hurt riskier assets in May.

On the flip side, U.S. Treasuries benefited from a flight to quality amid broader market volatility. The 10-year U.S. Treasury bond ended the month 38bps lower, at 2.12 percent; this is more than 100bps lower than the November high mark. At month -end the market was expecting two rate cuts in 2019.

The 2s10s curve compressed to 20bps despite a significant drop in the 2-year Treasury yield near month-end. In addition, we note that global yields remain low – the 10-year German bund is currently trading at -0.257 percent2 – making U.S. yields more attractive relative to overseas sovereign debt.

The trade war escalation occurred as global data came out weaker than expected. In the U.S., retail sales were disappointing in April following a strong March. U.S. industrial production fell 0.5 percent in April versus expected flat performance3 and durable goods orders fell 2.1 percent in April. However, labor data is still solid and May consumer confidence was better than expected, leading to a “Goldilocks” U.S. growth environment – not too hot, not too cold – that is typically supportive of IG bond performance. Despite this backdrop, IG spreads widened, mainly due to tariff announcements over the month. On May 10, President Donald Trump increased tariffs from 10 percent to 25 percent on $200 billion of Chinese imports and announced plans to impose 25 percent tariffs on the remaining $300 billion of imports from China. On May 13, China retaliated, and raised tariffs to 25 percent on $60 billion of U.S. imports. To read our thoughts on potential consequences of the trade war on corporate and municipal bonds, see Implications of Trade Uncertainty.

In May, the Bloomberg Barclays Municipal Bond Index posted a total return of 1.38 percent; the Index is now up 4.71 percent for the year.4 Strong demand and muted supply continue to support municipal performance. Returns in bonds maturing 10 years and longer were the best performers, and the 2s10s municipal curve modestly flattened. BBB-rated bonds outperformed all other ratings categories, as several states recorded higher-than-expected tax revenues during the month of April.

Despite the strength in the asset class, municipals had trouble keeping up with the large U.S. Treasury moves – especially at longer maturities. Municipals underperformed Treasuries across the curve although the 10-year ratios remain below 80 percent. The 30-year ratio moved slightly higher from the historically low level reached earlier in the month and ended the month at 90 percent. Also, the 30-year municipal yield ended the month near historical lows, making long-end municipals less attractive on a relative value basis.5

Municipal inflows have continued at a record-setting pace, with $38.6 billion of inflows year-to-date as of June 5.6 In order, the most inflows have gone into long-term, intermediate and high-yield funds. In addition, supply remained light in May. The month saw $27.5 billion of supply, down from $35.1 billion in May 2018.7 The strong technicals are expected to remain strong going into the summer months, given that hefty summer redemptions are expected to remain in place.

On the credit side, an uptick in state revenues in April has buoyed the performance of some states. Following weaker tax collections in December 2018, changes in tax reform led to increased tax collections in April, and some states are already declaring surpluses. Personal income taxes are typically between 25 percent and 45 percent of state budgets, per Barclays. In particular, New Jersey and Illinois saw stronger revenues in April.

Looking specifically at Illinois, state income tax revenues came in at $4.1 billion for April, which is $1.5 billion above what was expected. State officials expect this surge in tax revenue to largely erase the projected FY19 budget gap of $1.6 billion. Officials have also revised their FY20 income tax estimate upward by 4.5 percent ($958 million) over the governor’s proposed budget.8

The Bloomberg Barclays U.S. Corporate Index had excess return over U.S. Treasuries of -1.39 percent in May. Spreads widened in tandem with other risk assets, given trade uncertainty. Nonetheless, the total return was positive at 1.43 percent due to strength in Treasury performance. Lower U.S. Treasury yields also contributed to upward pressure on spreads on less-attractive all-in yields on corporates, but lingering interest from foreign buyers is expected to help offset this. A decline in dollar hedging costs and still-ultralow rates overseas means that U.S. IG will likely attract continued strong foreign inflows.

For May, the best-performing sectors were Foreign Local Government, Supranationals, Airlines, Office REITS and Healthcare REITS, per Barclays. The worst-performing sectors were some of those most directly impacted by China trade negotiations, such as Automotive, Metals and Mining, Oil Field Services, Refining, Wirelines and Independent Energy. Names rated Aa+ fared the best, while crossover credits fared the worst, in line with the risk-off stance of markets over the month.9

In terms of technicals, IG new issuance was $111 billion in May, up from $96 billion in April, with nearly half of May’s issuance coming from M&A. Over the month, Bristol-Myers Squibb Co. sold a nine-part $19 billion deal to fund its acquisition of Celgene Corp.; IBM issued an eight-part $20 billion deal to fund its acquisition of Red Hat Inc.; and Waste Management issued a $4 billion five-part deal to back its purchase of Advanced Disposal. Still, year-to-date, supply is down 9 percent, at $553 billion. This is mostly because M&A supply is still lower than last year’s; BAML notes that their pipeline estimate for IG M&A funding has fallen to a four-year low.10 Demand has also been strong, with positive inflows that started to taper off only toward month-end. Year-to-date, IG mutual funds have seen inflows of $125 billion.11

In IG credit, deleveraging is still a key theme (see Corporate Bond Market Outlook Q1 2019), especially in Communications and Pharmaceutical sectors. However, debt to EBITDA remains inflated versus the 20-year average across the ratings spectrum, particularly within the single-A tier, Bloomberg data shows. The deleveraging focus has helped to limit the negative impacts to fundamentals from trade uncertainty, rising wages and input costs, and other headwinds. That said, earnings growth is clearly slowing as trade tensions weigh on growth, and the pace of deleveraging may slow in the back half of the year. U.S. corporate earnings growth was slow in 1Q19 at just 1.54 percent.12

MBS had a challenging month, producing -40bps of excess returns over U.S. Treasuries, per the Bloomberg Barclays MBS Index. Implied volatility spiked (Figure 2) and prepayment fears are now front and center given the sharp decline in Treasury rates over the month. (To learn more about implied volatility, see our perspective A Key Metrics Rundown for Securitized Product Investors.) The distribution of MBS coupons outstanding has long pointed to a key risk of rates rallying (rather than increasing), and this rally has played out year-to-date. 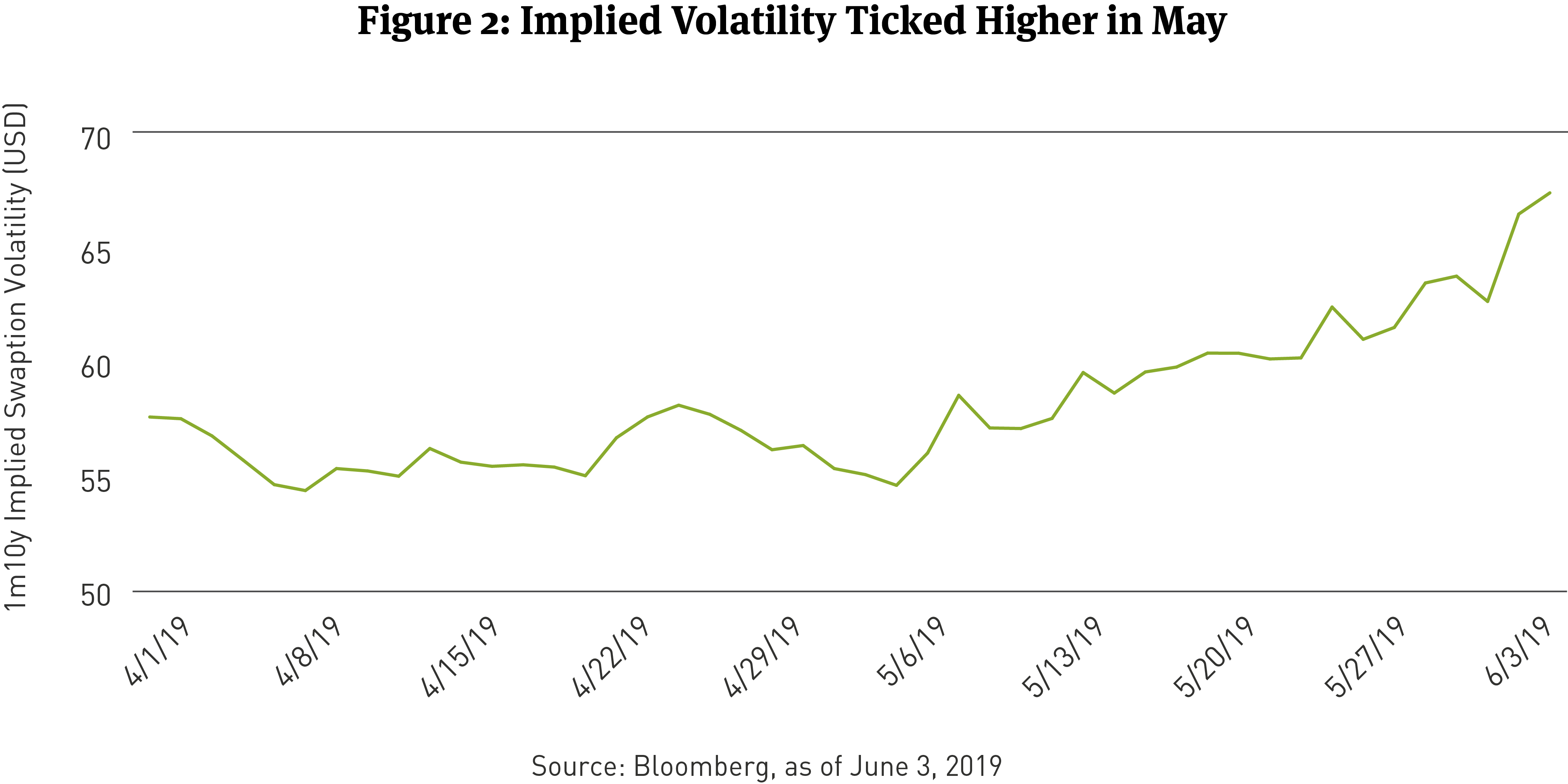 With 10-year Treasury rates around 2.3 percent, 25 percent to 30 percent of the conventional mortgage universe has at least a 50bp refinancing incentive.13 Most of this is occurring in mortgages originated in the past year, as older vintages have likely already refinanced and may be closer to refi “burnout.” Recent monthly prepayment reports have shown modest increases across the board, and due to the inherent lags in the sector, we expect to see the effects of the most-recent sharp rate rally over the next few months.

One potential positive outcome of the rate rally is that with more prepayments, the Fed’s portfolio could see money returned to its coffers in excess of its $20 billion reinvestment cap, and the Fed would then reinvest into MBS rather than Treasury bonds.14 In addition, supporting MBS performance, MBS supply is running below forecast to start the year,15 as the securitization rate has dropped significantly so far this year (banks have retained more mortgages on their balance sheet).16 Also, 2019 net organic supply projections are being re-written due to the rate rally as we enter the strong seasonal part of year. Finally, we note that new and existing home sales have been volatile and clouded by seasonal and weather-related impacts.

In contrast to MBS, asset-backed securities had a strong month. The Bloomberg Barclays ABS Index ended May producing 15bps of excess return, as the sector was supported by a flight-to-quality bid all month. Nominal spread compression versus benchmark swaps was exacerbated by the tightening of front-end swap spreads over Treasuries to all-time tights. Also supporting the sector, ABS supply totaled $20 billion in May – the lowest monthly total since January.17 Year-to-date, supply has reached $108 billion, per Barclays.

[1] Per the Bloomberg Barclays U.S. Corporate Index, based on option-adjusted spreads. Source: Bloomberg.

[14] In March, the Fed announced that its ongoing runoff of mortgage-backed securities (MBS) will end in September and beginning in October the maturing MBS would be reinvested into Treasuries with a cap of $20 billion per month.

Our latest perspective shows what our top minds see as implications of the China/U.S. trade negotiations for muni and corporate bonds

Markets recovered in September after the risk-off tone in August as trade rhetoric softened and economic data bounced back.