Pennsylvania’s budget gap, political gridlock and pension issues have weighed on performance in the state’s general obligation (GO) bonds. However, in our view, the state has a solid underlying credit picture and, with some hard choices about its spending, Pennsylvania could see upward ratings pressure and improved market perception.

Pennsylvania still has not passed a new budget even though its fiscal year ended June 30 and it faces a $2.2 billion gap in its current spending plan. Weighing on the budget is the state’s large and looming pension liability, which continues to grow. This year’s budget delay is less severe than the dysfunction displayed in the budgetary crisis of FY16, when the state withheld aid to schools and implemented stopgap measures to operate. That said, the state’s problems still hinge on an unwillingness to meaningfully increase revenue or cut spending to improve its fundamentals.

The lack of willingness by state lawmakers to produce consistently balanced and timely budgets has prompted spread widening (Figure 1). 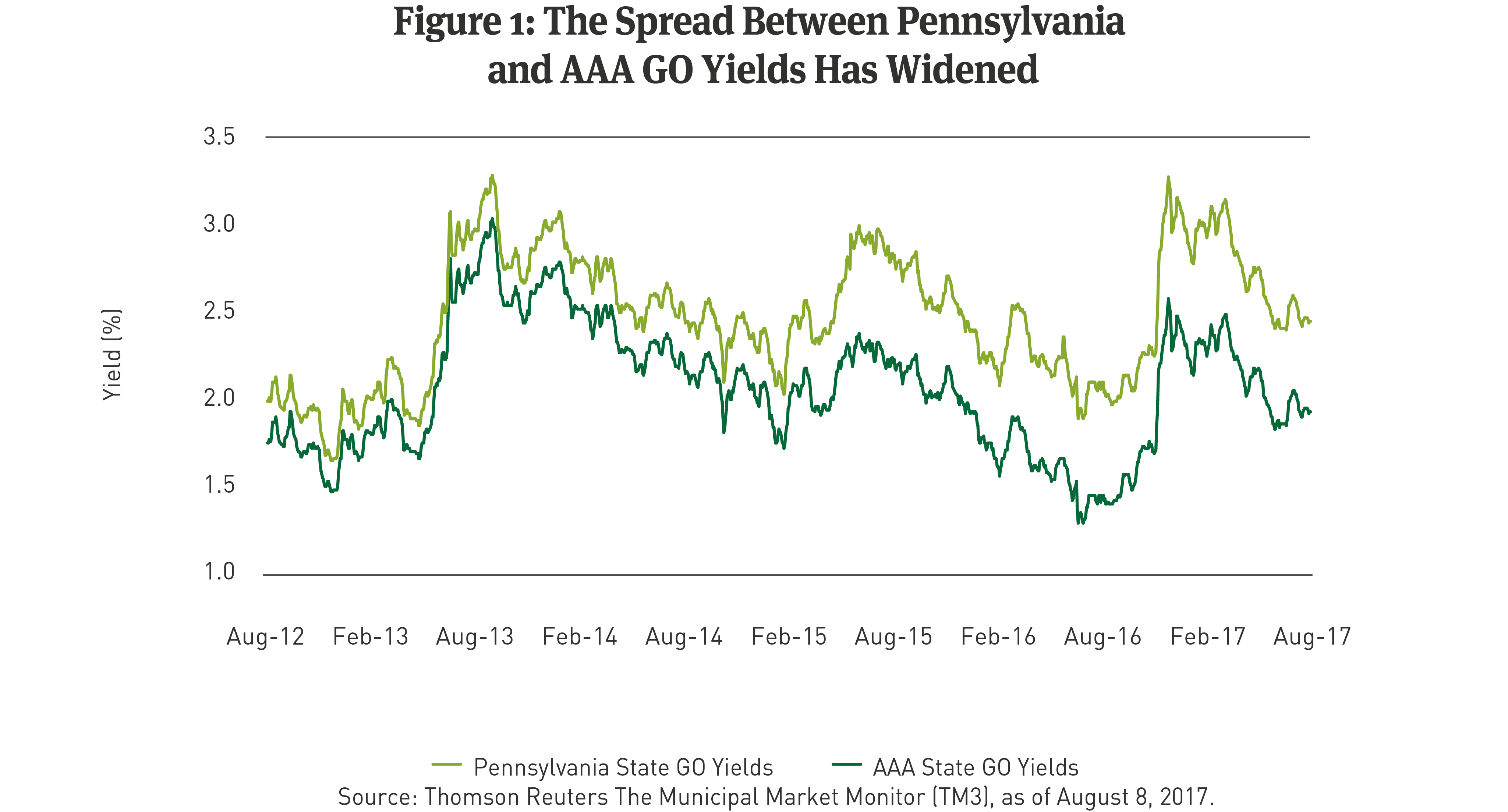 But if the state can clear its political hurdles and pass a balanced budget that also addresses its pension liability, the basic characteristics of a strong credit are there. Pennsylvania has a potential glide-path back to higher credit quality.

Some things to consider:

Pennsylvania has significant flexibility to increase revenues. The state has a large tax base and its current top marginal tax rate of 3.07 percent is the second lowest in the nation (aside from states with no income tax).1 A one percentage point increase in income taxes on Pennsylvania residents would yield roughly $4 billion in additional revenue.2 Further aiding the Keystone State’s revenue-raising potential is the expanding Marcellus Shale natural gas resources. Pennsylvania Gov. Tom Wolf’s proposals to ease the state’s fiscal woes through an increase in the severance tax have been rejected to date by the state legislature, but revenue from the state’s growing energy sector is another lever that could be tapped to balance the budget.

Also, Pennsylvania’s net tax-supported debt burden is below the levels of three other states—Connecticut, Illinois and Kentucky—facing pension difficulties. In contrast to those states, Pennsylvania’s debt load is roughly on par with the median debt levels for the U.S. Further, its debt service expenditure at 4.2 percent of revenue is far lower than the aforementioned states, all of which had debt service costs of 7.4 percent or higher. Connecticut spends a whopping 13.3 percent of revenue on principal and interest costs.3 Pennsylvania also has large and growing city centers within its borders, including Philadelphia and Pittsburgh (Figure 2). 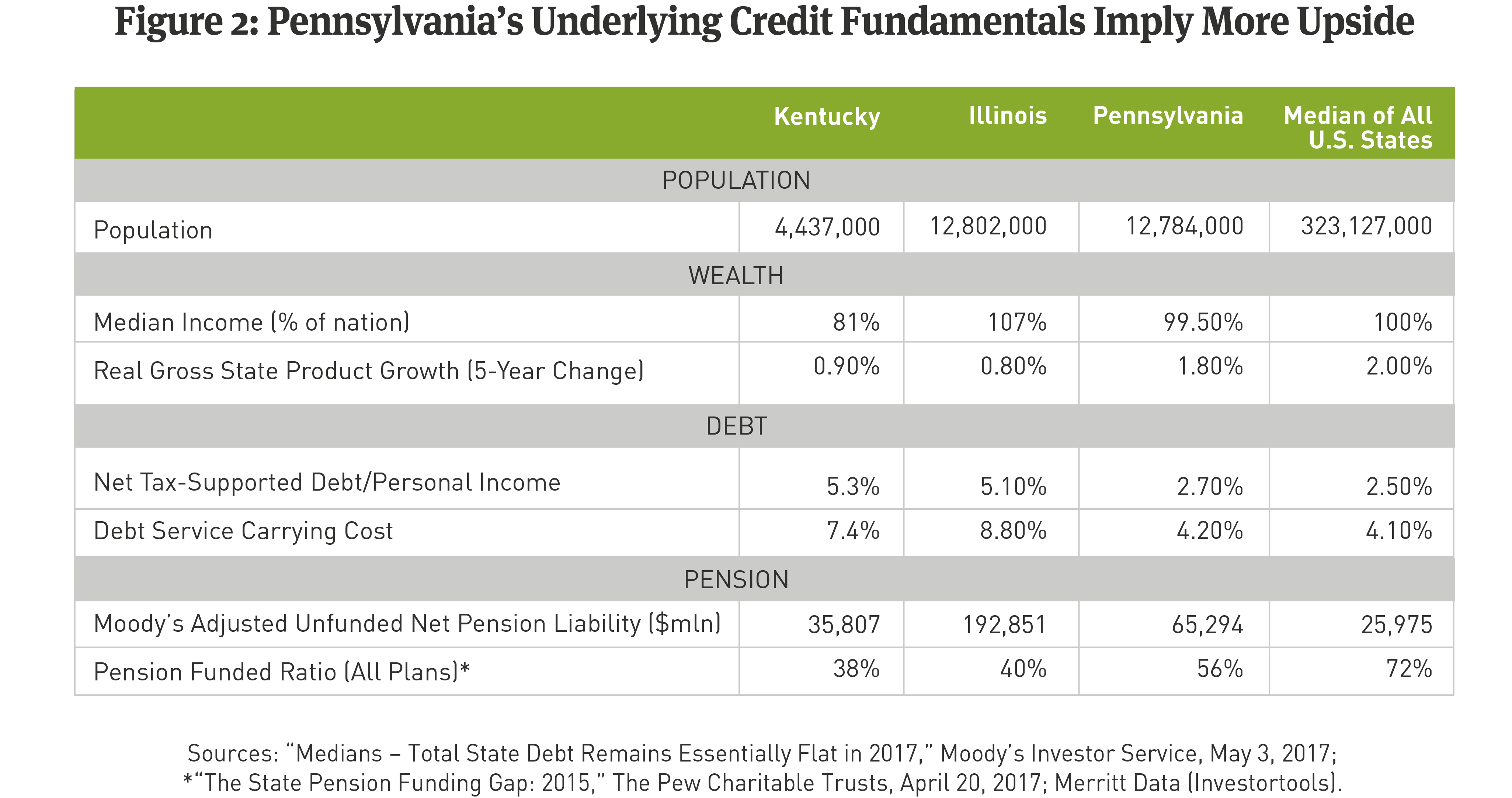 Finally, despite the political gridlock, legislators have passed significant bills to enhance bondholder security, such the state’s Act 85 of 2016 which strengthened the Pennsylvania school district intercept mechanism and additional appropriation protections. Pennsylvania has made assurances to bondholders that they will be paid—even without a budget.

Given Pennsylvania’s credit strengths, the long-term credit worthiness of the state is not an ability question, but rather a willingness issue. This distinction has also been applied in our discussions of Illinois in recent months (see A Credit View of Illinois’ Past and Future). Figure 2 shows that Kentucky and Illinois pension liabilities dwarf those of Pennsylvania.

Pennsylvania’s credit profile suggests that the state could present opportunities if it takes necessary steps to deal with its budgetary and pension issues. However, for now, the state continues to be penalized by markets and ratings. Spreads widened significantly during the extended budget impasse in 2015 and have since widened out further, per Barclays. In terms of ratings, S&P Global Ratings placed the state’s A+ rating on negative outlook on May 20, 2016, and on July 6, S&P changed the negative outlook to a (more punitive) negative watch. Given that the state has not yet tackled its budget and pension problems, S&P could lower Pennsylvania’s rating again. The Moody’s rating is currently Aa3(NEG).4

We remain focused on Pennsylvania’s continuing budget gridlock and its impact on credit quality. We continue to monitor the state for fundamental improvement or deterioration, and for opportunities given the state’s inherent credit strengths.