Despite COVID-19 concerns, including a month-end resurgence in cases that plagued the economic outlook, governments and businesses reduced lockdowns. Their actions, coupled with unprecedented policy and fiscal support, continued to support a V-shaped market recovery.

A reversal of recent economic gains is an increasing risk given rising COVID-19 cases in regions which opened early and with limited precautions, increasing the likelihood of a ‘W’ shaped economic path. The Fed’s intervention in markets and back-stop of risk assets are likely to support tight valuations as investors look through 2020 and into 2021, despite deteriorating fundamentals. Additional fiscal stimulus is likely given rising cases and expiration of unemployment benefits during July.

Treasury yields were uncommonly stable with trading limited to a narrow range across the curve. The two-year bond yield fell 1 bp while the 10-year yield was up 1 bp and the 30-year yield was unchanged. The 10-year Treasury opened and closed the month with a yield of 66bps, with a high of 91bps on June 5 and a low of 64bps on June 29.

The municipal yield curve flattened during June with 2-year yields more than 10bps higher while 15-year yields were unchanged and 30-year yields were slightly lower. Yields have been range-bound sitting below 1% from 10 years and in. The Municipal/Treasury ratio curve (See Figure 1) remained inverted. Ratios across 2-, 5-, 10- and 30-year maturities were at 178 percent, 143 percent, 136 percent and 114 percent, respectively, at month end. With a 0.82 percent return for June, Municipal Bonds, as measured by the BBG Municipal Bond Index, outperformed Treasuries, as measured by the BBG Treasury Index at 0.09 percent. 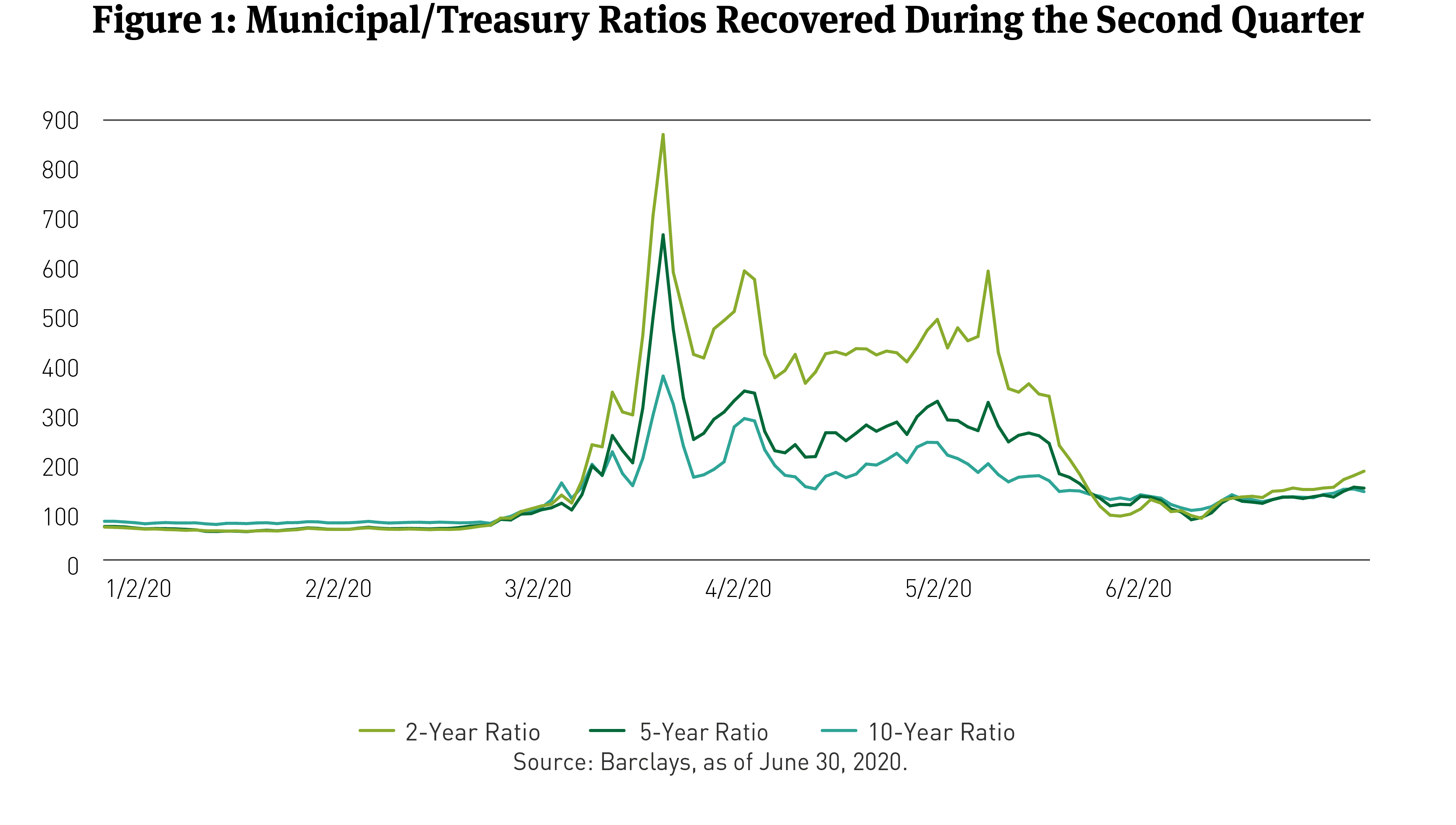 Tax-exempt municipal supply continued to be significantly outweighed by taxable issuance. Gross supply for June came in at $45 billion. Nearly $16 billion of that was taxable supply, continuing this year’s trend with about 27 percent of new issue supply taxable compared to 9 percent during the same period in 2019, per The Bond Buyer. Tax-exempt supply is 3% lower than 2019.

Inflows have returned, with mutual funds receiving inflows in six consecutive weeks, reducing year-to-date outflows to under $7 billion. Long-term funds led the rebound while high yield funds continued to lag. Steady demand resulted in heavy over subscriptions and tighter spreads across all credit, coupon, and call structures, according to Barclays.

On balance, muni credit conditions continue to trend negative. Many issuers have delayed capital spending in fiscal year 2021 budgets and are issuing more short-term debt and drawing on credit lines. Although conditions are trending negative, high-grade essential service issuers generally have managed to sustain their financial capacity to meet their obligations.

IG corporate bond spreads tightened from 174 bps at the end of May to 150bps at the end of June. Short-to-intermediate spreads compressed more than long-term spreads. Lower-quality bonds—those rated BBB, for example, were 34bps tighter—outperformed higher-quality bonds. Bonds rated A tightened 19bps. The Fed began purchasing individual IG corporates in June. At the end of June, the Fed held $9 billion of bonds and exchange traded funds, up from about $5 billion at the end of May. Direct Fed intervention was and should continue to be supportive of the IG market.

IG supply slowed in June to $180 billion, down from the torrid pace of May’s $240 billion total and the record tallies in April and March. Year-to-date IG supply hit $1.2 trillion at the end of June, up by about 100 percent year-over-year, per Barclays. Fund inflows remained elevated, with IG funds reporting about $47 billion of net new flows in June, per EPFR, in line with May at $50 billion.

Credit rating agency activity was high, with downgrades dwarfing upgrades at levels not seen since 2009, particularly in the high yield market sector. Fallen angel—downgrades from IG to speculative grade—volumes are likely to remain elevated, given high leverage prior to COVID-19. A silver-lining is that IG companies have focused on balance sheet strength, albeit out of necessity, to preserve financial flexibility. Share buybacks, dividends and debt-funded mergers and acquisitions all are dramatically lower in 2020 year-to-date, based on news reports and our observations. (See Corporate Bond Market Outlook Q2 2020).

Corporate market technicals remain favorable due to a pick-up in fund inflows and Fed purchases. We expect spreads to be rangebound with declining credit fundamentals offset by Fed support. The meaningful increase in taxable municipal issuance and attractive valuations as compared to similarly rated corporates are positive factors.

ABS continued its impressive run, generating over 100bps of excess returns, per the Barclays ABS Index. The combination of the Term Asset-Backed Loan Facility and lower supply, which declined 40 percent year-over-year, stabilized the sector and helped drive spreads tighter.

Our analysts believe that MBS spreads look attractive relative to Treasuries. Agency CMBS and ABS spreads are approaching year-end 2019 levels, but may still outperform in risk-off environment, in our view.

Why Bonds Matter: Lessons from Behavioral Finance
By Peter Coffin
Breckinridge President Peter Coffin shares his views on bonds in this new era of volatility.
Quick Takes: Breckinridge Assesses the 2020 Election
By Matthew Buscone , Jeffrey Glenn , Nicholas Elfner , Adam Stern
The 2020 elections clarify some important issues for investors and leave others unsettled for now. Our investment team is tracking the implications closely and offers insights and expectations in our comprehensive roundtable discussion.
Reflecting on the Importance of Our Independence
By Peter Coffin
Independence is a key part of the fabric of Breckinridge.