The decision is a credit positive, but its effects may not be felt immediately.

On Thursday, the Supreme Court effectively established a national right-to-work law for state and local government employees in Janus v. AFSCME; in right-to-work states,1 public sector workers represented by a union are not legally required to contribute a share of fees for the bargaining done by the union on their behalf. The ruling is meaningful for municipal credit insofar as it may weaken the bargaining power of public unions. It likely increases issuers’ fiscal flexibility, especially during times of distress. However, it is not a panacea for every issuer’s credit ills, and investors should keep the decision in proper perspective.

Janus addressed whether the state of Illinois could require public employees to pay union “agency fees” even if they are not union members. Agency fees support costs associated with collective bargaining, such as hiring attorneys or accountants, soliciting union members’ input, or other costs. In right-to-work states, these fees are voluntary for non-union members; in all other states, they are owed by any employee covered under a collective bargaining agreement—whether that employee is a union member or not. The court concluded that free speech rights are overly impinged when a state requires non-members of a public union to pay agency fees. The court rationalized that in the public sector context, agency fees amount to “forced subsidies” of union policy preferences such as overtime rules, healthcare benefits or other union leanings.

The Janus ruling will likely make it easier for issuers to win concessions from employees, especially when a state or local issuer is under fiscal stress. Agency fees can be costly for public workers, and if the choice is between accepting reduced take-home pay or cutting back on agency fees, many employees will choose the latter. Over time, a feedback loop may develop: the employees shortchange the union of agency fees, and then the union is less able to advocate for their interests. As a result, the terms of labor contracts weaken, and more employees drop their membership because they find less value in the union.

The data broadly support the conclusion that union membership, and clout, will decline. Consider Illinois. There, the average union member paid $663 in annual agency fees in 2014, or about 1 percent of average state-local employee pay.2 That is not an insubstantial sum. Figure 1 illustrates that the percentage of state and local workers who are union members tends to decline with growth in the number of right-to-work states. 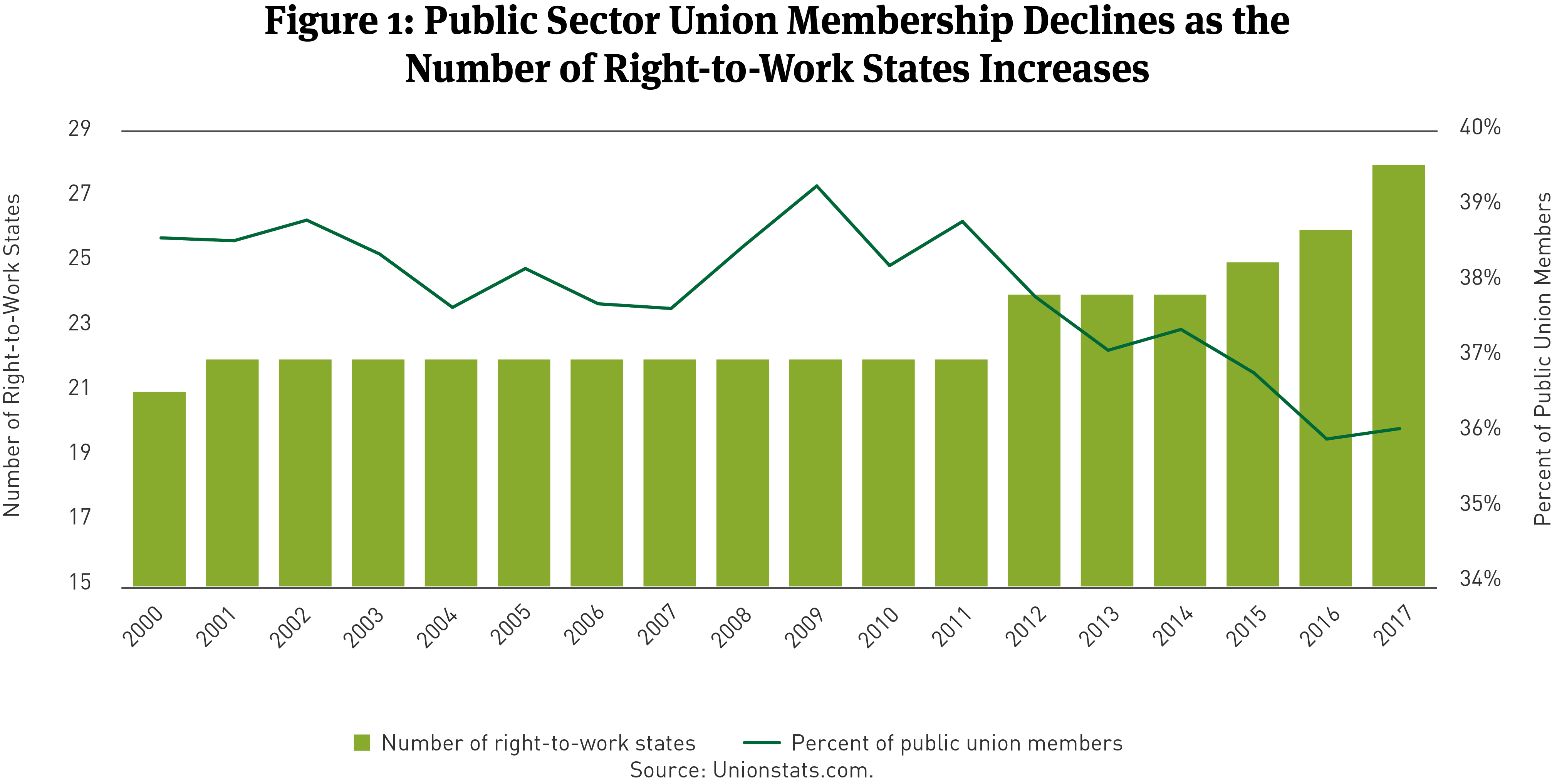 In the municipal market, the immediate beneficiaries of Janus are likely issuers in the several states with credit challenges and high unionization rates. This includes issuers in Illinois, New Jersey and Connecticut. Issuers in California, Rhode Island, New York and Massachusetts also stand to benefit, although these states are in better fiscal health than those mentioned immediately above.

Janus Does Not Eliminate All State Labor Issues

Despite the benefits the ruling provides for state and local government, investors should not necessarily think of Janus as a permanent turning point for municipal credit. This is true for several reasons.

So Janus’ effect may differ from the labor regulations put in place in Wisconsin in 2011,3 or in Missouri in 2017. In those situations, elected representatives changed labor laws with voter consent, and they were accountable to voters for their decisions. One wonders how members of the New York Metropolitan Transit Authority or Chicago Public Schools’ unions will respond to the Janus decision in the absence of voter support for a public sector right-to-work law. The pressure on union members to continue paying dues will likely be strong, and many members will likely still want to pay them.

[1] There are currently 28 right-to-work states.

[2] Frank Manzo and Robert Bruno, “The Application and Impact of Labor Union Dues in Illinois,” April 13, 2016.

[6] At least one proposal, known as the National Public Employment Relations Act or the Clay-Perkins Bill, received strong union support.

Considerations for the Municipal Bond Market and COVID-19