Risk assets ignored escalating tensions in Iran and Iraq and President Donald Trump’s impeachment trial as equities soared to new highs early in the month before retracing after heightened investor concerns related to the coronavirus caused a flight to quality at the end of January.

As anticipated, the FOMC held rates steady. In its statement, the committee characterized the labor market as “strong” and economic growth as “rising at a moderate rate,” while indicating that it believes its policy is geared toward “inflation returning to the Committee’s symmetric 2 percent objective.”

With a risk-off sentiment, Treasury yields declined sharply at month-end. The 10-year Treasury closed at 1.51 percent, a decline of 41-basis points (bps) over the month. After steepening in December, the Treasury curve bull flattened – longer-term rates falling more quickly than shorter-term rates – with the 2s/10s curve closing at 19bps. We believe concerns around a recovery in global growth and easy monetary policy should keep rates rangebound from here.

While the January Effect – when demand for municipal bonds from maturing bonds and coupon payments exceeds new issue supply – was in full force over the month and yields reached historic lows, municipals could not keep pace with the sharp Treasury rally and underperformed across most of the curve. The 10-year and 30-year AAA closed the month at 1.15 percent and 1.80 percent, marking all-time lows, according to Siebert Williams Shank & Co.

M/T ratios—measuring the yield offered by municipal bonds as a percentage of that of Treasuries—declined throughout the month before improving somewhat as January ended. During the month, the 5-year dropped to 55 percent, the lowest level since 1988, and finished January at 63 percent, while 10-year and 30-year spots closed at 76 percent and 90 percent, respectively. 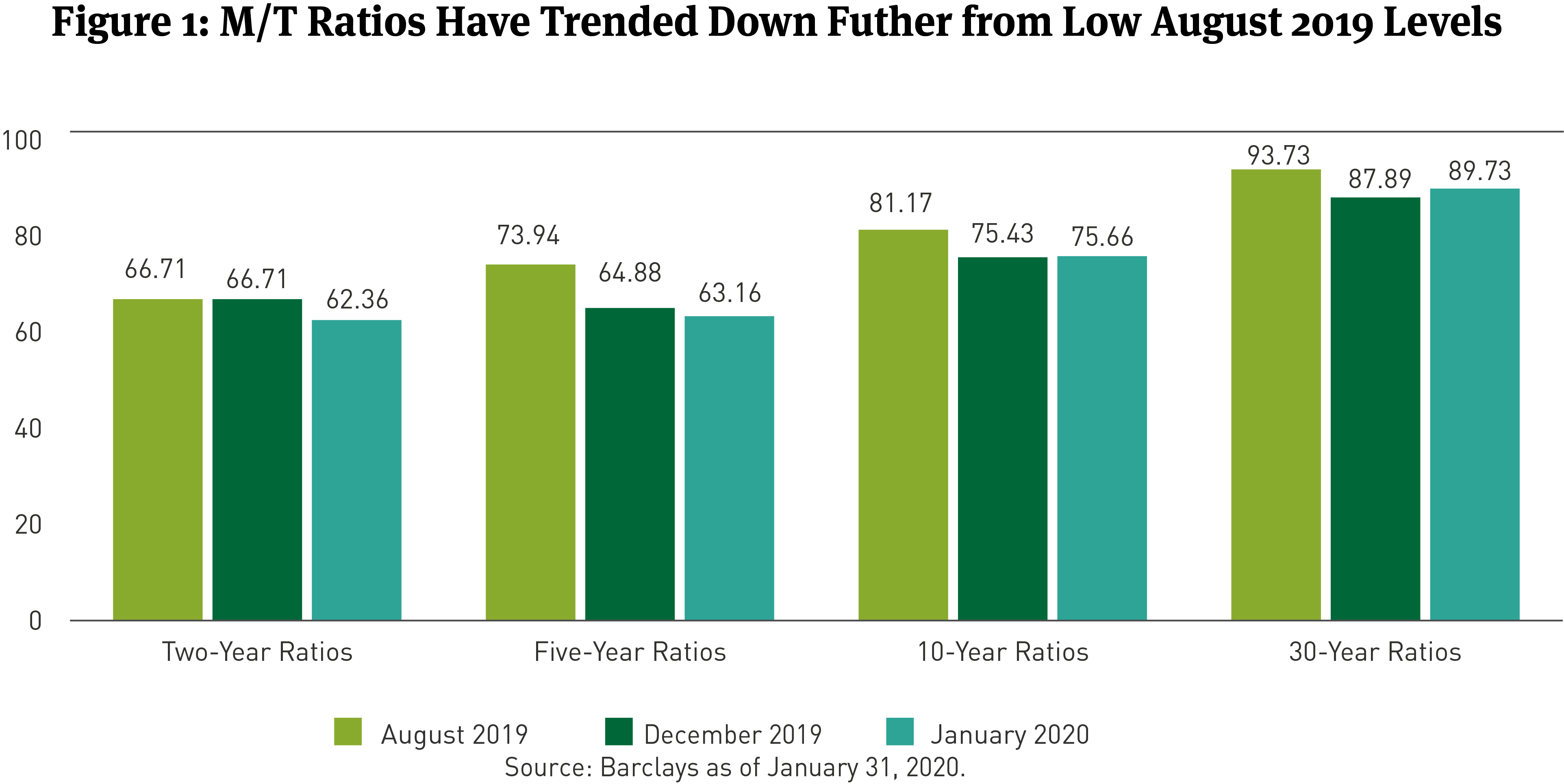 The credit environment remains stable as the state budget season unfolds. Noteworthy items include: as New York State nears fiscal year-end 2020, the governor has proposed a Medicaid redesign and some cuts to local aid to close the budget gap; Connecticut’s governor has refused to spend down newly found reserves; and declining natural gas prices are pressuring leading indices in Pennsylvania and West Virginia, but budget weakness has yet to emerge. In addition, Democrats in the House of Representatives announced an infrastructure proposal in late January that drew support from the Speaker of the House and the Chairman of the House Ways and Means Committee who said of the bill, “I think Build America Bonds ought to be a place to start.” It is too soon to tell if the effort will garner enough support to advance, but the prospect of an infrastructure program that includes a program like Build America Bonds would be a boon to the municipal market, in our view.

Corporate bond spreads widened 9bps during the month, with the BBG U.S. Corporate Index spread ending the month at 102 bps. Corporate bonds underperformed similar-duration Treasuries by 80bps for the month. One of the most notable effects as the month wore on was the precipitous decline in oil prices, which was reflected in the bonds of companies operating in the Energy sector.

Index-eligible IG corporate fixed-rate supply was $172 billion in January, according to Barclays data. That total compared with $148 billion during the same period one year ago. The 16 percent year-over-year increase reflected continued strong issuance trends. IG fixed-rate net supply of $80 billion during January was nearly 14 percent higher year-over-year, per Barclays.

Within securitized bond markets in January, the general risk-off sentiment benefited agency CMBS and ABS, but lower rates led to increased volatility within MBS that weighed on the sector. Fund flows into mortgage funds were strong throughout January with two consecutive weeks of flows in excess of $1 billion.

Agency CMBS led the way for securitized markets with a total return of 2.55 percent, according to Barclays data. Agency mortgage-backed securities (agency MBS), as represented by the BBG MBS Index, earned a total return of 70bps, trailing Treasuries of similar duration.

On February 3, Breckinridge Chief Investment Officer Laura Lake offered perspective on the coronavirus, saying, “With onset of the coronavirus, the risks to the downside have clearly increased, in terms of slowing growth, lower Treasury yields and wider spreads. We did not make any changes to our rate forecasts for the second quarter of 2020 or positioning targets believing it is too soon. Most economic estimates are unclear as to the severity of the health crisis and its potential economic effects.

“For comparison, we looked back to the SARS outbreak of 2003, and based on news and industry reports as well as our own research, this virus appears to be more widespread and more contagious than SARS, but also less deadly than SARS. One upside, as a global community we are much more connected and informed than in 2003, with knowledge of prevention and the ability to analyze and implement potential cures more quickly. In addition, China is restricting travel more aggressively than in the past. On the other hand, global supply chains are not more interconnected, and China has become a wealthier country, allowing for greater access to global travel out of mainland China than in 2003.

“While most businesses and the economies can withstand a slowdown for a short period of time, a multi-month shutdown of supply chains or other operations will prove detrimental. Industry researchers have estimated that if mid- to late-February fails to see the outbreak brought under control, it could bring a greater risk that a more negative outcome will result.”

In June, there was a more cautious tone seen in U.S. monetary policy.

Our latest perspective shows what our top minds see as implications of the China/U.S. trade negotiations for muni and corporate bonds

Fixed-income market participants often quote the term “yield,” but the word’s context could be misunderstood because various types of yield exist and each is calculated differently.