In ESG: A Natural Course of Analysis for Bonds, we write that the analysis of environmental, social and governance (ESG) criteria may help mitigate risk, a central goal for most investment grade fixed income investors. ESG analysis can unveil long-term trends that are important to bond investors, who tend to invest over longer horizons. However, long-term risks can meaningfully impact bond issuers and performance in the near term, as well. In the last six months, investors saw how ESG risks led to price volatility and ratings agency actions for Vale S.A., General Electric Co. and Kraft Heinz Co.

In January, a tailings dam burst at Vale’s Feijao mine, releasing enough mud and mining debris to cover 4.5 miles. The material spilled into a local community, causing loss of life and the destruction of natural resources. Brazilian authorities arrested eight people in the mining collapse and carried out search-and-seizure warrants at TÜV Süd, the German firm that caved in to pressure from Vale to certify that the dams were safe. On two occasions in 2018, TÜV Süd inspected and certified the dams as meeting regulations.1 This tailings dam incident is not the first such occurrence for Vale. About three years ago, the company had a similar tailings dam collapse at its Samarco joint venture, also in Brazil.

The Vale disaster is a salient example of the importance of evaluating workplace safety and the waste management practices of companies, particularly for those in the Metals and Mining sector. According to the Sustainability Accounting Standards Board (SASB), three of the topics considered most material to financial performance for mining companies are Workforce Health, Safety and Well-Being; Waste and Hazardous Materials Management; and Biodiversity Impacts.

In addition, the company’s deficient focus on workplace safety and its questionable ethics in regulating dams indicate the importance of analyzing corporate governance. The United Nations Environment Programme executed a review of Vale’s tailings dam failures after the Samarco incident, and found that the key cause of Vale’s dam failures was “often a failure of management” and that “the inadequacy of available technology is rarely the problem.” S&P Global Ratings said, “we believe shortcomings existed in the company's ability to comprehend, map, control and mitigate disposition risks.”2

The latest disaster has brought the company’s social license to operate into question, given the diminished public support for Vale and the mine collapse’s negative impact on some rural communities. Also, the disaster has led to myriad uncertainties for the company, including the total litigation costs ahead and the operability of existing mines that use similarly constructed tailings dams. The Feijao mine accounted for roughly 2 percent of Vale’s companywide iron ore production in 2017. The mine, however, is part of a larger Paraopeba complex, which consists of five mines and accounted for about 20 percent of Vale’s total iron ore production that year. The disaster brings uncertainties as to whether other mines in the Paraopeba complex will be allowed to continue running.

Vale’s bonds that mature in 2026 widened from about 200 basis points (bps) in the weeks preceding the dam burst3 to as wide as 292bps by February 6, 2019 following the January 25 incident. Spreads have since recovered to about 226bps4 but are still roughly 26bps wide relative to pre-incident levels.

In October 2018, GE announced that Larry Culp would replace John Flannery, its chairman and chief executive officer of just over one year. Concurrently, GE stated that it expected to take a $22 billion noncash goodwill impairment charge related to the Power business, which was acquired when GE completed its acquisition of Alstom’s power and grid businesses in November 2015. The charge was roughly equal to the Power sector’s total $23 billion goodwill balance as of the end of 2Q18.

The Power business write-down led to investigations into GE’s accounting practices by the Department of Justice and the SEC. The company is also under review by the SEC regarding a $6.2 billion charge taken on GE Capital’s insurance business in January 2018; that charge was associated with an announcement that the firm would need an additional $15 billion to satisfy GE Capital’s reserve requirements over the following seven years. GE subsequently lowered expectations for industrial free cash flow and earnings per share in 2018. More recently, in March, Culp said prospects for the company’s Power business have not improved and that industrial free cash flow would not recover in 2019, with expectations for cash generation flat to down year-over-year.

The Power business write-down illustrates ESG issues of inadequate financial disclosure and transparency, which have raised concerns for the analyst community and the broader market. The Wall Street Journal recently wrote about the company recording $13.5 billion goodwill with the Alstom acquisition, an amount in excess of the acquisition price of $10 billion, implying that the tangible value of Alstom is negative.5 This issue highlights the importance of understanding companies’ accounting of intangible assets, which have become a greater proportion of total corporate assets and a significant topic in ESG analysis.6 The intangible assets on GE’s books have swelled significantly due to a bevy of acquisitions in recent years (Figure 1).

Fitch downgraded GE to BBB+(STA) from A(*-). Fitch also downgraded the company’s commercial paper rating, to F2 from F1. However, in February 2019 Fitch placed the BBB+ rating on negative outlook.

In February 2019, Kraft Heinz announced disappointing EBITDA and gross margin results for 4Q18, and an even bleaker outlook for FY19. The company said it would take a $15.4 billion charge, made up of a $7.1 billion goodwill impairment charge from the U.S. Refrigerated and Canada Retail businesses and an $8.3 billion intangible asset impairment charge from the Kraft and Oscar Mayer trademarks – two of the company’s most important brands. Kraft Heinz also cut its dividend by 36 percent.

In addition, Kraft Heinz announced that its procurement division was under SEC investigation related to accounting policies and internal controls and, as a seemingly reactionary measure, the company restated its cost of goods sold upward by $25 million.

Many ESG issues factor into Kraft Heinz’s negative 4Q18 announcements, but the most prominent is likely its insufficient offerings of health-conscious options for consumers. The Kraft and Oscar Mayer product lines are mostly processed, packaged foods, which are unattractive to health-conscious consumers. This lower demand is putting pressure on Kraft revenues and margins and is a major factor in the underperformance of certain businesses and the write-downs of the Kraft and Oscar Mayer brands in the most recent quarter.

Kraft Heinz has lagged its Consumer Products sector peers in innovating new products to better appeal to consumers seeking more natural, unprocessed foods. Figure 2 shows that Kraft Heinz revenues are largely drawn from countries with high rates of obesity. MSCI noted that Kraft Heinz is the “only U.S. domiciled company in the MSCI All Country World Index (ACWI) to not set reformulation targets to lower the amount of sodium, fat and sugar in its products.” The charges on Kraft’s businesses and the poor performance in 4Q18 reflect that the company is not offering foods that are seen to contribute to the overall health of the company’s consumer base. Per SASB, health and nutrition is one of the most material ESG criteria for food and beverage companies. 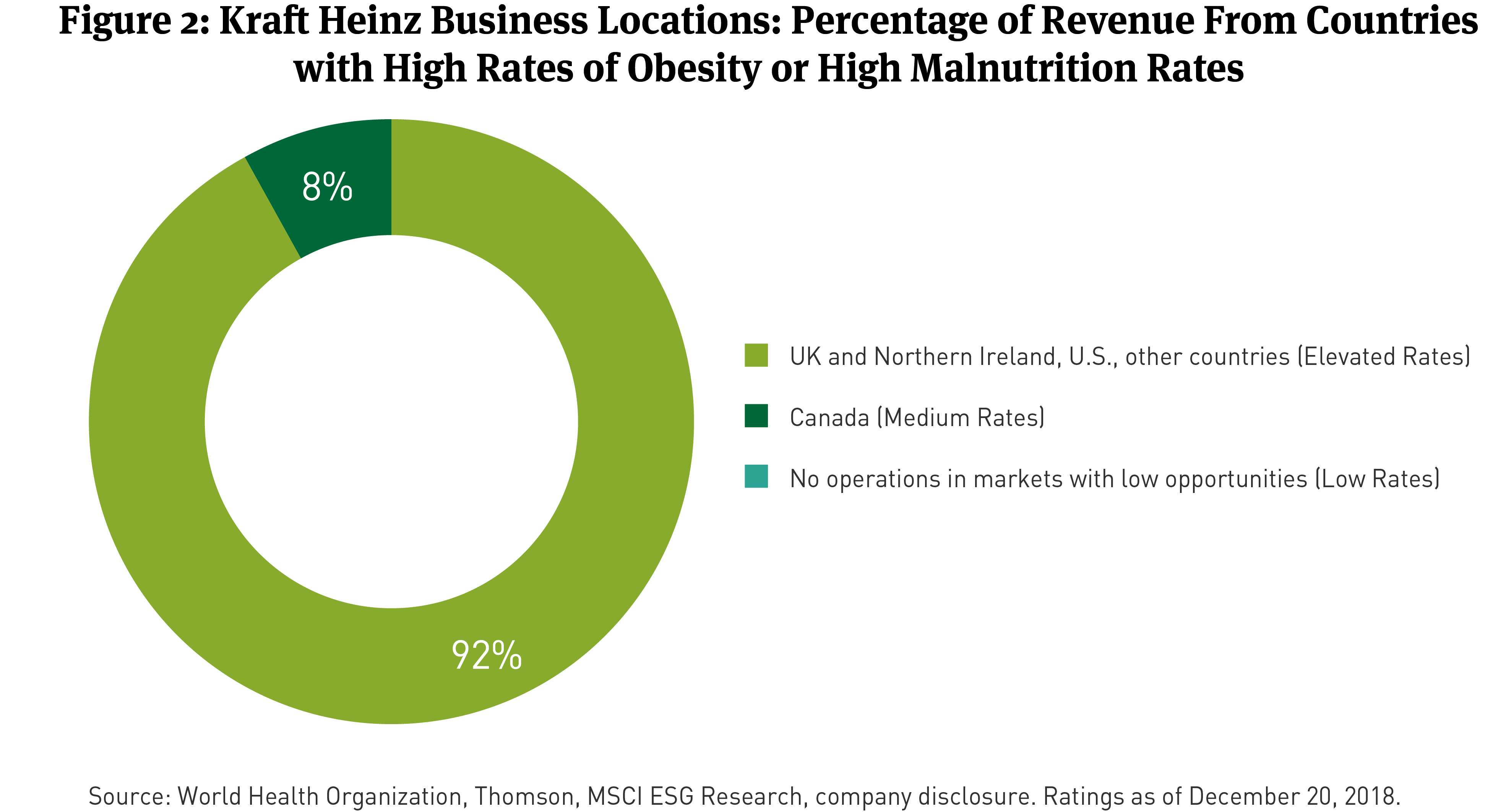 The company’s lack of innovation in healthy food options highlights another ESG issue, known as short-termism (see The Short-Termism Debate Heats Up). The company lost sight of investing to manage long-term trends facing the business, such as the overall shift toward healthier eating by Kraft Heinz consumers. Instead of looking long term, the company has been hyper-focused on reducing selling, general and administrative (SG&A) spending, leading to flat top-line revenues.

Following the Kraft Heinz 4Q18 announcement, S&P changed the outlook on the company’s BBB rating to Negative from Stable, and Moody’s revised its outlook on the company’s Baa3 rating to Stable from Positive. Kraft Heinz bonds maturing in 10 years gapped out from a baseline of 182bps to 207bps over the day following the announcement.7 As the market seemingly took solace in the reintroduced leverage target, dividend cut and promise of imminent asset sales, spread levels recovered to 193bps the following day.

On March 15, 2019 Kraft Heinz failed to file its SEC Form 10-K before the deadline. As a result, S&P revised Kraft Heinz to credit watch negative from negative outlook. The market reacted with a temporary 5bps widening of spreads on March 18, 2019. Fitch has remained steady with a BBB- rating and stable outlook throughout the recent news flow.

How investing in women creates value - for investors and for society.

This quarter, our newsletter highlights our engagement with oil and gas companies, the Business Round Table statement and how hospitals are addressing social determinants of health.

While clean energy is a growing priority for many states, some electric utility customers may not be willing to pay higher bills.