In the current environment, investors are confronted with a unique investment climate in which near-term considerations might differ significantly from long-term investment objectives. This has amplified investor focus on short-termism, as evidenced by the recent stock market rally.

Many intelligent investors are voicing concerns about this current phenomenon. In his recent letter to clients, hedge fund investor Seth Klarman expressed misgivings about the current market environment and advised caution. Warren Buffett continues to favor long-term value investments that can withstand the test of time. “Don’t get too excited about rapid market shifts of any kind, especially not today,” seems to be their core message.

And yet there is a persistent tendency to prioritize short-term gains over long-term value creation. Many investors and companies still seem to be caught up in a cycle of quarterly earnings results and projections, with compelling valuations often being viewed as an end in and of itself.

Some believe that one of the key drivers of this behavior among the world’s largest companies has to do with stock buybacks. In his recent writing for the Harvard Business Review, economist William Lazonick notes that “corporate profitability is not translating into widespread economic prosperity.”1 While companies have been effective at generating profits and increasing share prices, Lazonick posits, they have been less focused on making long-term investments that target areas such as innovation, R&D and employee salaries and benefits.

Lazonick argues that the reason for this has largely to do with the rise of stock buybacks. Through careful tracking and analysis of trends in stock buybacks across 449 companies in the S&P 500 that were publicly listed from 2003 to 2012, he discovered a disproportionate allocation of profits to stock buybacks and dividends. More specifically, 54 percent of the combined earnings across the 449 companies (or $2.4 trillion) were used for stock buybacks. An additional 37 percent were carved out for dividends. This means that just 9 percent of the combined profits were left for other uses, including long-term investments in innovation, people, and other important areas. 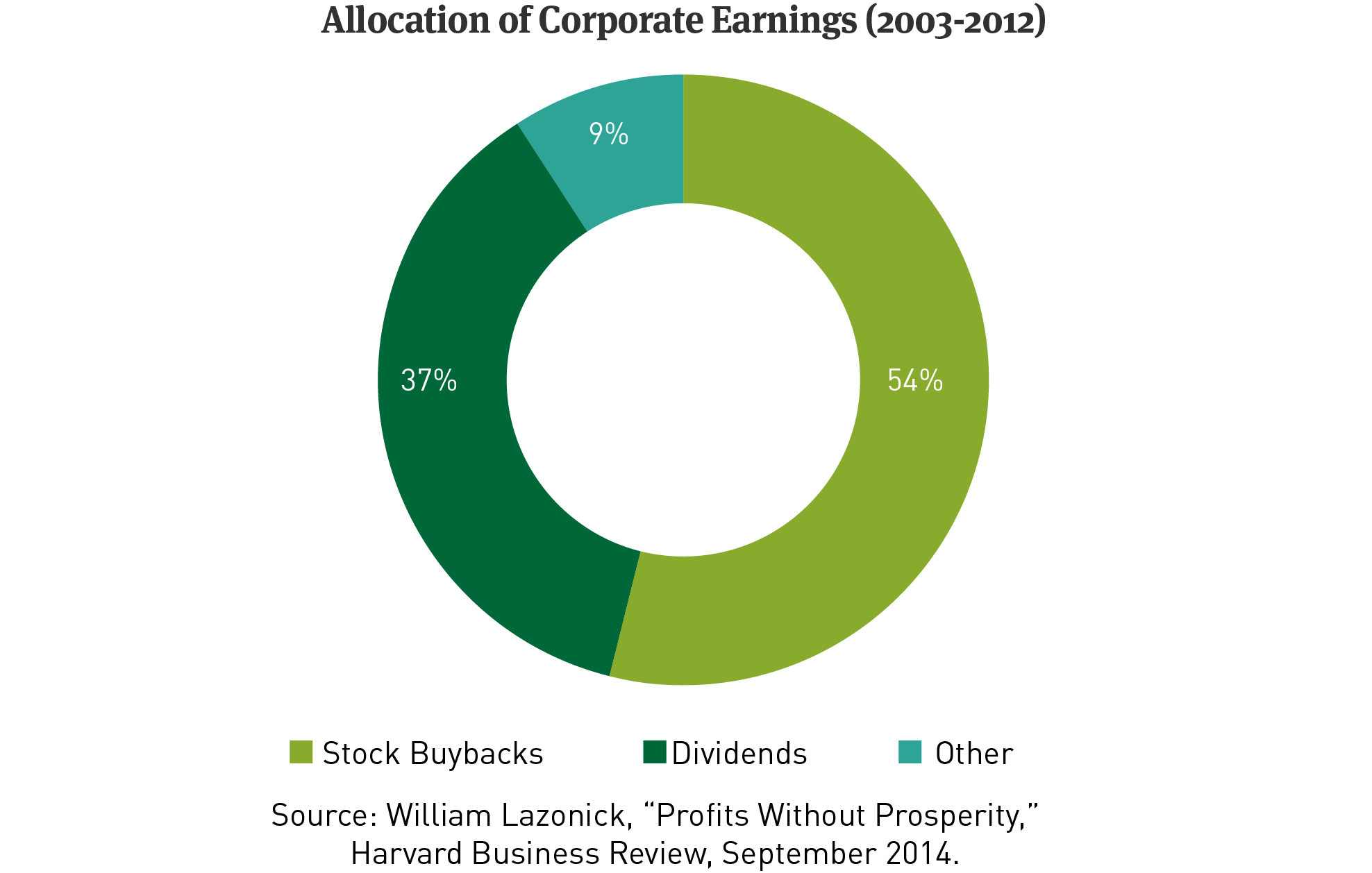 Although this focus on short-termism has been quite persistent, we have reason for optimism. In recent years, we’ve begun to see a movement toward rigorous research that builds a clear case for corporate long-termism, with the goal of creating a broader movement among investors and companies alike.

In February of this year, the McKinsey Global Institute and FCLT Global published research aiming to capture the multifaceted nature of long-termism and demonstrate that companies oriented toward the long term deliver superior results compared to their more short-term-oriented peers.2 The study looks at 615 large- and mid-cap U.S. publicly listed companies from 2001 to 2015 (a similar time period to Lazonick’s work), and it defines long-term business practices by reviewing patterns of investment, growth, earnings quality and earnings management.

The study finds that companies classified as “long term” indeed deliver superior results compared to other companies. Over the 2001-2014 time frame, these companies delivered 47 percent higher revenue growth, 36 percent higher earnings growth and 81 percent higher economic profit growth compared to their peers. They also spent 50 percent more on research and development (R&D), and their market capitalization grew $7 billion more than that of their peers. From 2001 to 2015, they also added 12,000 more jobs on average than other companies. 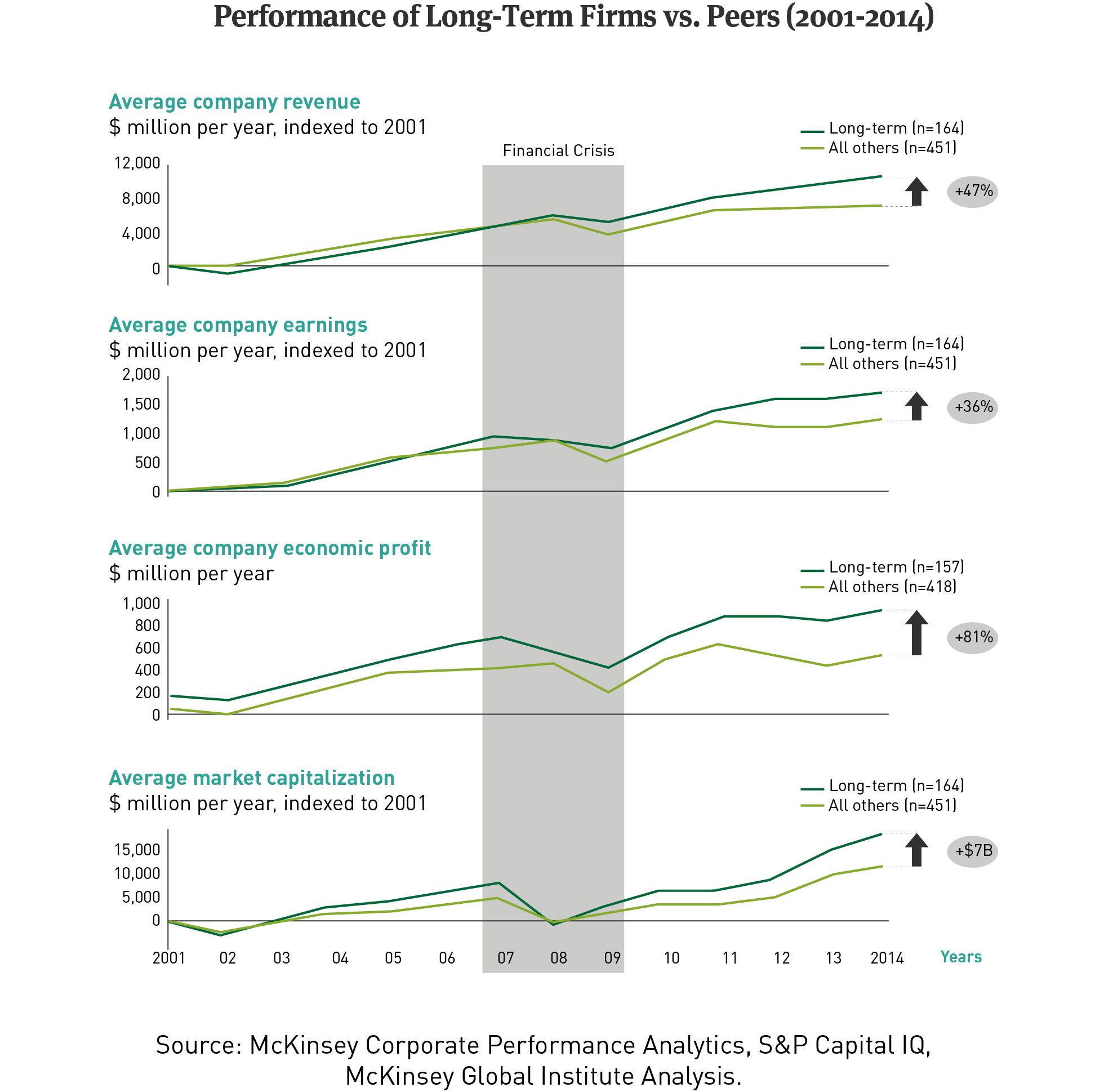 In our own investment research, we pay close attention to the way companies prioritize long-term versus short-term considerations. As part of our integration of environmental, social, and governance (ESG) factors, we especially look at corporate governance as an area where long-term decision making plays an important role. Our analysis suggests that senior leaders and board members at well-managed companies tend to exhibit greater strategic focus and long-term perspective. We discuss our views in the recent article, “Incentivizing Corporate Long-Termism.”

More broadly, we think that clear commitment to long-term value creation goes hand-in-hand with the core principles of sustainability. Indeed, companies with sound long-term business practices tend to be more cognizant of important social and environmental issues that pertain to their business activities, as many of these issues manifest themselves over the long term. As such, long-termism matters not only because of its demonstrated investment merits but also because of its positive social and environmental impact.

DISCLAIMER: The material in this document is prepared for our clients and other interested parties and contains the opinions of Breckinridge Capital Advisors. Nothing in this document should be construed or relied upon as legal or financial advice. Any specific securities or portfolio characteristics listed above are for illustrative purposes and example only. They may not reflect actual investments in a client portfolio. All investments involve risk – including loss of principal. An investor should consult with an investment professional before making any investment decisions. Companies mentioned are provided as illustrative examples and do not necessarily represent past, current or future portfolio holdings. This document may contain material directly taken from unaffiliated third party sources, including but not limited to federal and various state & local government documents, official financial reports, academic articles, and other public materials. If third party material is included, it is believed to be accurate, and reliable. However, none of the third party information should be relied upon without independent verification. All information contained in this document is current as of the date(s) indicated, and is subject to change without notice. No assurance can be given that any forward looking statements or estimates will prove accurate or profitable.

Listen to two of our credit analysts chat about the “E,” “S” and “G” in nonprofit hospitals’ mission and goals.