Markets rebounded from their steep March declines, as the disparity between market sentiment and economic data continued to grow. Hence, expectations for a V-shaped recovery seem optimistic, with a slow, uneven recovery more likely. Negative economic data hit throughout the month, including GDP for Q1 which contracted by 4.8 percent on an annualized basis per the Bureau of Economic Analysis. Analysts are forecasting Q2 GDP to decline by 30-40 percent.

Consumer demand plummeted, with the increase in unemployed workers, totaling 30 million, pushing the unemployment rate to an estimated 15 percent for April. As a result, consumer confidence fell to its lowest level since 2014, based on readings from The Conference Board, marking the largest drop since 1973.

Unprecedented support from Congress and the Fed continued in earnest. President Trump signed a $484 billion relief package, including money to shore up the Paycheck Protection Program, while the Fed addressed the burgeoning need of states and local governments with an expansion of the Municipal Liquidity Facility.

Treasuries traded in a tight range over the month with the 10-year closing at 0.62 percent, supported by the Fed’s continued purchases, with its most recent pace of buying at an estimated $40B per week.

After a strong rally, municipals retreated at the start of the April, but found more stability due to a drop in secondary market selling and sparse new issue supply, along with additional Fed support. Bonds traded in a tight range for most of the month, but the tone softened into month end and yields ticked higher.

For the month, AAA-rated muni bond yields fell across shorter maturities, finishing unchanged in 5 years and rising from 10 years and longer. With shorter maturities outperforming, the 2s10s and 2s30s curves closed April at the steepest levels year-to-date and in more than a year. Despite the volatile swings, on a year-to-date basis AAA-rated bond yields were lower in the 1- to-3-year range and unchanged in 5 years. The 10-year spot closed 2 basis points (bps) higher, while 30-year underperformed, finishing 19bps higher. Ratios recovered from their March extremes, but trended higher near month end as supply increased , per MMD. 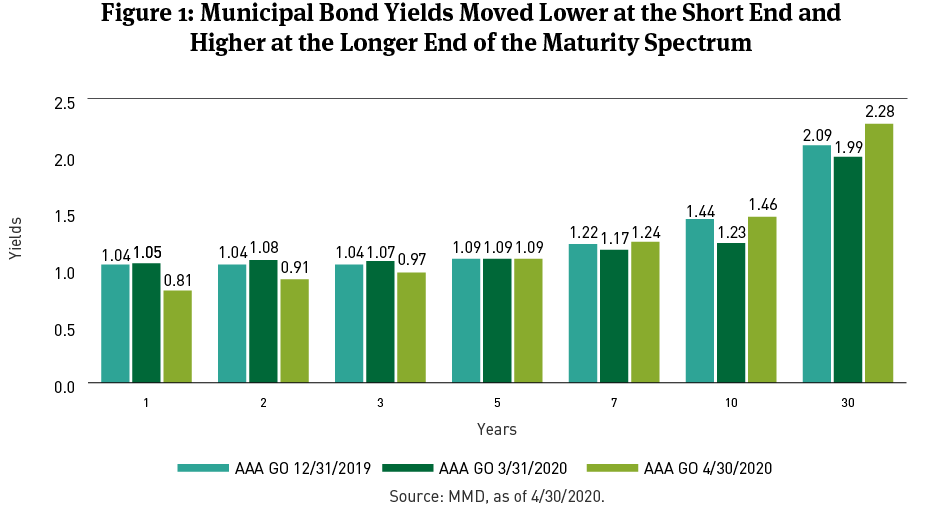 Market technicals steadied in April, with three consecutive weeks of $7 billion in issuance, leaving tax-exempt supply only 4 percent behind last year’s pace, per The Bond Buyer. New muni supply was the main driver behind underperformance into month end. Some issuers upsized deals to take advantage of strong demand. After March’s record-breaking outflows, municipal funds recorded two consecutive weeks of inflows, but finished the month with $1.3 billion in outflows, pushing year-to-date outflows to $21.7 billion according to Lipper.

Similar to last month, lower quality continued to underperform, with BBB-rated and high-yield names down 8 percent and 10 percent, respectively, on the year, while AAA-rated returns are modestly positive year-to-date. Across sectors, electric revenues, education, and water and sewer were the better performers within our targeted sectors, while hospitals and transportation lagged. Overall, the Barclays Municipal Bond Index fell 1.26 percent, pushing the year-to-date return to negative 1.88 percent, marking the weakest start to the year since 2008.

We shortened the duration targets for the tax-exempt intermediate and long-intermediate strategies due to a flat yield curve in 5- to 10-years and remain up-in-quality given the increased likelihood of wider spreads due to credit downgrades.

Spreads moved well off their wides of 373bps recorded on March 23, finishing April at 202bps. On the month, BBB-rated bonds outperformed, with spreads 89bps tighter while A-rated bonds were 58bps tighter. The Barclays U.S. Corporate Investment Grade Index produced a total return of 5.24 percent and excess return of 4.55 percent in April.

IG corporate issuance year-to-date is $798B, up a staggering 84 percent versus last year at the end of April. April IG new issuance was a new monthly record at $285B as corporate issuers sought to raise cash, as the market tone improved. Average April new issue concession—a pricing accommodation compared secondary market trading levels—was 26bps and buyers covered the available supply by more than three times, per Bloomberg. Both factors reflect reflected strong demand for IG bonds. Mutual fund flows remained solid, with U.S. IG funds reporting about $23B of inflows in April, per Informa PLC/EPFR Global.

Perhaps counterintuitive to the strong technical environment, credit fundamentals were weak. The economic consequences of global COVID-19 responses negatively impacted corporate cash flows. With earnings season still underway at the end of April, Bank of America reported corporate earnings and sales growth came in 11 percent and 0.4 percent weaker than expected at the start of the season. Rating agency activity remains high. Downgrades have exceeded upgrades at levels not seen since 2009. The number of fallen angels—that is, IG-rated bonds downgraded to speculative grades—are likely to remain elevated given high leverage even prior to the pandemic’s emergence. A silver-lining is that IG companies are increasingly focused on their balance sheets, albeit out of necessity, to preserve financial flexibility. Share buybacks, dividends and debt-funded mergers and acquisitions—which tend to be shareholder friendly and of more concern to bondholders—declined in April.

Asset-backed securities (ABS) delivered a total return of 1.34 percent and excess return of 1.17 percent for April, according to the Barclays Asset-Backed Securities Index. Debt securities backed by credit card receivables outperformed bonds backed by auto loans by about 50bps year-to-date, per Barclays, which makes sense given the concerns that have been reported related to autos.

From Peter Coffin – A Perspective on the Current Market
By Peter Coffin
Hear from our President, Peter Coffin, on the disorder in the current investment grade bond market.
Quick Takes: Breckinridge Assesses the 2020 Election
By Matthew Buscone , Jeffrey Glenn , Nicholas Elfner , Adam Stern
The 2020 elections clarify some important issues for investors and leave others unsettled for now. Our investment team is tracking the implications closely and offers insights and expectations in our comprehensive roundtable discussion.
COVID-19 Bond Market Volatility Updates
Breckinridge's latest updates on the current market conditions.