Throughout April, investors donned their armor and grabbed their swords and shields, strategizing for any market battles that could ensue from the all-important Fed meeting announcements and economic data releases set for month end. By the time the smoke cleared on the month, risk assets had performed well, with the S&P 500 rising 3.9 percent, the Bloomberg Barclays U.S. Investment Grade Corporate Index posting an excess return of 95 basis points (bps) and the Bloomberg Barclays Municipal Bond Index posting a return of 38bps.

Overall, higher-risk assets outperformed for the month. Equities reached record highs and the Bloomberg Barclays High Yield Index option-adjusted spread (“OAS”) fell 33bps. As the Wall Street Journal noted,1 high yield bond yields dropped below those of leveraged loans, which typically trade with lower yields because of higher seniority in the capital structure. In addition, the floating-rate structure of most leveraged loans may be less of a draw with the Fed’s more patient stance, yet another example of FOMC synapses firing. Treasuries continued to oscillate on Fed rhetoric and economic data, and ended the month flat to modestly higher. The 2s30s curve steepened modestly, as investors were concerned about yield curve inversion at the short end in March.

Despite strong labor data, above-trend GDP growth and rising oil prices, inflation data is tepid, indicating that the market may be returning to a Goldilocks scenario (Figure 2). In its April meeting, the Fed left rates unchanged and there was little change in its statement that it will be patient raising rates. While the lack of inflationary pressures continues to vex the Fed, Chair Jerome Powell believes this lower inflation figure to be transitory and that it should climb toward 2 percent over the rest of the year. 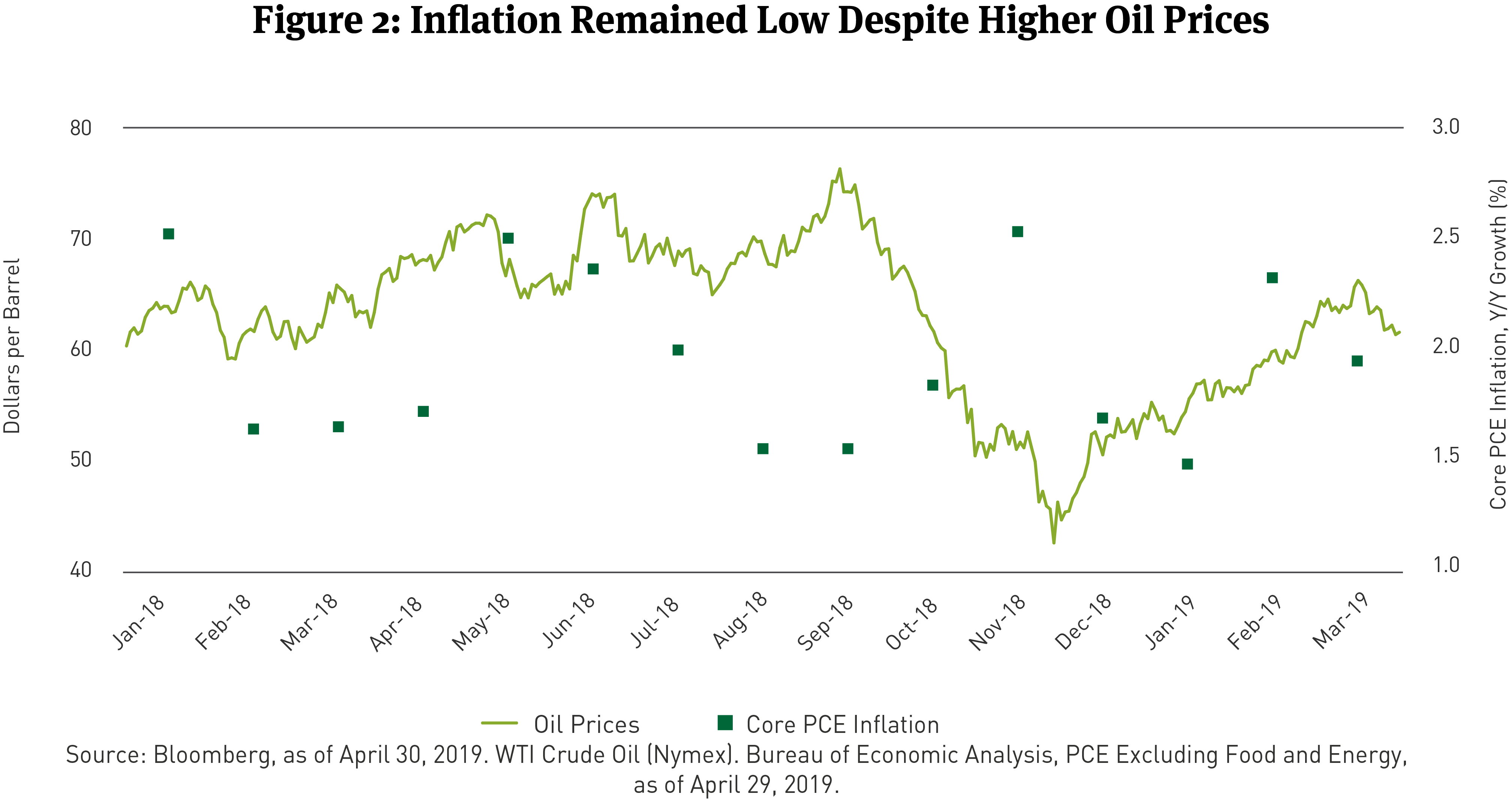 In April, municipal performance was strong across the curve, but noticeably strong from 10 years and longer. Municipal yields moved higher by 1-9bps in 2- to 7-year maturities, but decreased by 5bps in 30 years. The 10-year municipal yield was flat. With the municipal underperformance in the 2- to 7-year range, ratios in that part of the curve have increased from the February/March lows. However, the 10- and 30-year ratios have continued to grind lower. The 10- and 30-year ratios ended April at 74.25 percent and 86.9 percent, respectively, around the lows of the last 10 years.3

The municipal market benefited from strong mutual fund inflows and continued demand from high-net-worth individuals, combined with lower new issue supply in April. Looking at the long end of the curve, long-term municipal inflows were $2.2 billion for the week ending April 24, the second-highest weekly inflow since 1992, per Lipper. At the same time, supply across the 20- to 30-year maturity range is less than 25 percent of total issuance year-to-date, while the 5- to 10-year, 10- to 15-year and 15- to 20-year sleeves each make up about 18 percent.4

Returns were positive across the curve, and the Bloomberg Barclays Municipal Bond Index outperformed in the longer maturities versus the shorter – a trend in line with March performance. The municipal curve flattened modestly. In contrast to municipals, the Treasury curve steepened modestly, making municipal yields less compelling relative to Treasury yields. Lower-quality municipals also outperformed, versus higher-quality. On a sector basis, hospital bonds outperformed, while resource recovery and electric bonds underperformed.

Strong inflows continued throughout tax time, helping support strong performance year-to-date. As of April 24, Lipper reported $29.4 billion of inflows year-to-date, continuing the best start to a year since 1992 and marking 16 consecutive weeks of positive inflows. In addition to the inflows, supply weakened in April with just $22 billion, the lowest monthly total of the year. Light dealer inventories have also contributed to strong muni returns.

We expect demand to rise over the summer, partly because maturities are expected to rise in coming months, per Siebert. For May through July, Morgan Stanley forecasts $72 billion of negative net supply due to principal repayments and coupon payments. Investors having more cash to put to work could help keep a lid on ratios through the summer.

State fundamentals remain stable. Several states that had lower revenue collections in 1Q19 were able to rebound in April, as many taxpayers waited until tax day to pay their bills. Democratic leaders met with President Donald Trump to discuss the $2 trillion infrastructure plan. However, the funding structure for the bill is yet to be determined.

In the first two weeks of April, IG corporate bond spreads tightened 10bps, in line with the solid macro backdrop and risk-on sentiment across markets.5 The OAS then remained rangebound through the end of the month, closing at 111bps. The Brexit extension, progress in U.S.-China developments and global easing all helped corporate performance over the month. With excess return of 95bps in April, the excess return increased to 371bps year-to-date.

For the month, returns were highest in longer maturities. BBB-rated companies fared the best, while Aa+ fared the worst. The best-performing sectors were Telecommunication, Automotive, Independent Energy, Life Insurance and Tobacco. The worst performing were Health Insurance, Construction Machinery, Environmental, Healthcare and Consumer Products sectors, per Barclays. The strength in Telecom was partly an offshoot of recent deleveraging commitments from AT&T Inc. and Verizon Communications Inc. Autos were helped by Ford’s better-than-expected earnings numbers, with the company mentioning “improved mix with higher average transaction prices and margins.” The strong performance in higher-risk sectors and lower-rated names also illustrated the general market preference for higher-risk assets in April, and showed high grade investors’ willingness to reach for yield down the credit curve.

In earnings news, S&P 500 1Q19 corporate earnings were better than feared, with positive earnings surprises outnumbering negative ones by 6:1 through the end of April.7 This is partly attributable to modest expectations heading into earnings season, after a stream of companies lowered guidance in 1Q19 and baked some earnings volatility into spreads.

Technicals remained supportive, with another month of light issuance. Supply totaled $96 billion in April, following supply just under $100 billion in March. The year-to-date total volume of $442 billion is down 8 percent compared to the same period last year.8 However, large M&A deals in the pipeline could help boost supply in coming months. For example, to start May, Bristol-Myers Squibb Co. came to market with $19 billion to pay for its planned acquisition of Celgene Corp.; that issue is the largest corporate debt sale so far this year.9 Credit fundamentals are mixed across industrials, but many companies involved in large M&A have shifted their focus toward deleveraging (see Corporate Bond Market Outlook Q1 2019).

On the demand side, new issues were generally well received. The average new issue concession increased a touch to 2.3bps in April from 2.2bps in March, per Bank of America Merrill Lynch. Fund flows were $24.8 billion, taking year-to-date fund flows to $97.6 billion.10

ABS has had strong outperformance to start the year. The Bloomberg Barclays U.S. ABS Index posted excess return of 9bps in April and is up 50bps year-to-date. The broad normalization of credit fundamentals continues to be the main trend. Credit card trust fundamentals have deteriorated on the margin as the consumer balance sheet normalizes and issuers seek to diversify their business mix away from the low-risk convenience users, into revolving balance customers. That said, we believe that the sector remains stable and up-in-quality. The short, defensive characteristics of the sector continues to be the main driver of strong returns.

In MBS , excess returns fell -1bps in April, and are up 27bps year-to-date, per the Bloomberg Barclays U.S. MBS Index. The focus continues to be on rising weighted-average coupons (WACs) and deterioration of the float. Refinancing risk continues to be a key market trend for MBS following the rally in Treasury bonds in March. All eyes will be on prepayment reports as long as the 10-year Treasury bond stays as low as the 2.50 percent range, which could prompt refinancing activity. Notably, the Fed’s reinvestment cap remains at $20 billion per month. The Fed plans to shift its purchases to Treasury bonds, away from MBS , which by some projections may mean that the private market will need to absorb an additional $25 billion to $50 billion in MBS each month. On the supply side; the slow, seasonal part of the year has kept net supply at bay and has helped boost spread tightening so far this year. New and existing home sales have been volatile and clouded by seasonal/weather related impacts.11

Importantly, a new single-security solution for Fannie Mae and Freddie Mac securities (uniform mortgage-backed securities, or UMBS) will go into effect in May. For more details on UMBS, see Five Key Themes in the Securitized Market.

[2] Proxies for the equity and corporate bond markets are the S&P 500 Index and the Bloomberg Barclays U.S. Corporate Index, respectively.

Market technicals continued to have a positive influence on both the muni and IG corporate bond markets in December.

Many fixed income investors are concerned about the recent rise in interest rates being widely reported in major financial news.