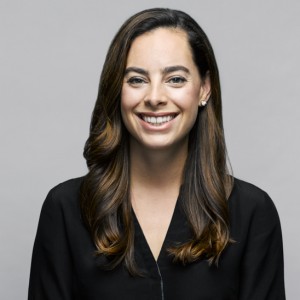 The $4 trillion municipal market includes a wide range of bonds with varying issuer types, funding sources, credit risks and other characteristics. In this informational piece, we break out the major types of municipal bonds and provide some of our general credit perspectives on each.

Tax-backed bonds are supported by the state or a political subdivision’s taxing power, either explicitly or implicitly. They include:

Traditional GO bonds are backed by an unlimited amount of property taxes and/or the issuer’s full faith and credit. In many states, GO bonds can be issued solely with voter approval. Depending on the state, GO bonds may be paid from a specific property tax levy earmarked for principal and interest retirement, or from a combination of a property tax levy and the issuer’s general resources. Bond proceeds are typically used to finance essential projects such as operating public transit or public schools.

Limited-tax GOs are backed by a limited amount of property taxes and sometimes a full faith and credit pledge. The tax levy limit is typically set by the state statute. Voter approval to issue these bonds often is not required. Bond proceeds are typically used to finance essential projects.

Key Negatives: Issuer cannot levy taxes beyond a certain limit to back the debt.

Dedicated tax bonds are secured by specific taxes of a state or local government. Taxes pledged often include income or sales taxes. The structure is designed to be a form of nonrecourse financing. Bondholders have a claim on the taxes pledged, and only those taxes. If there is a default, bondholders lack recourse to other funds of the issuer. Bond documents and state laws determine the extent to which pledged funds can be used for purposes other than repaying bondholders. Pledged taxes may be completely unavailable to the general fund, or available for general purposes after debt service is paid.

Bond proceeds are often used to finance essential projects, including transportation. They may also be used to fund less-essential needs like convention centers, entertainment spaces or other desires.

Key Positives: Specific tax revenue streams are legally pledged to service debt; the design is supposed to be self-supporting and nonrecourse; in theory, the structure should insulate bondholders from impairment in Chapter 9 bankruptcy.

In the event the government fails to appropriate principal and interest, bondholders are often entitled to the property that has been financed – at least when a deal is structured as a lease. However, foreclosing on the lease may prove challenging if the assets in question are of vital need for the government. In other cases, bondholders may lack any substantive recourse.

Despite the comparatively weak security features backing appropriation debt, they are a common form of issuance in the municipal market. Because appropriation bonds often finance essential needs, and because defaulting on these bonds would severely limit market access for essential projects, state and local governments have long honored them.

Key Positives: Credit quality is linked to the state or local government’s credit fundamentals; failure to appropriate principal and interest may result in bondholders taking back a leased property.

Key Negatives: Technically not debt; when a government is under fiscal stress, appropriation of funds may be at risk.

Tax allocation bonds are payable from property taxes generated by the incremental appreciation in property within a designated area. Bond proceeds are typically used for redevelopment needs within the area’s boundaries. Per U.S. bankruptcy code, these bonds should be treated as secured obligations in a Chapter 9 bankruptcy as they are included in the category of “special revenues.” Pledged tax revenue is segregated from an issuer’s general fund.

Key Positives: Credit quality is distinct from the host local government’s credit fundamentals; principal and interest repayments should be insulated from impairment in Chapter 9 per plain language in the U.S. bankruptcy code, although this language has never been tested. 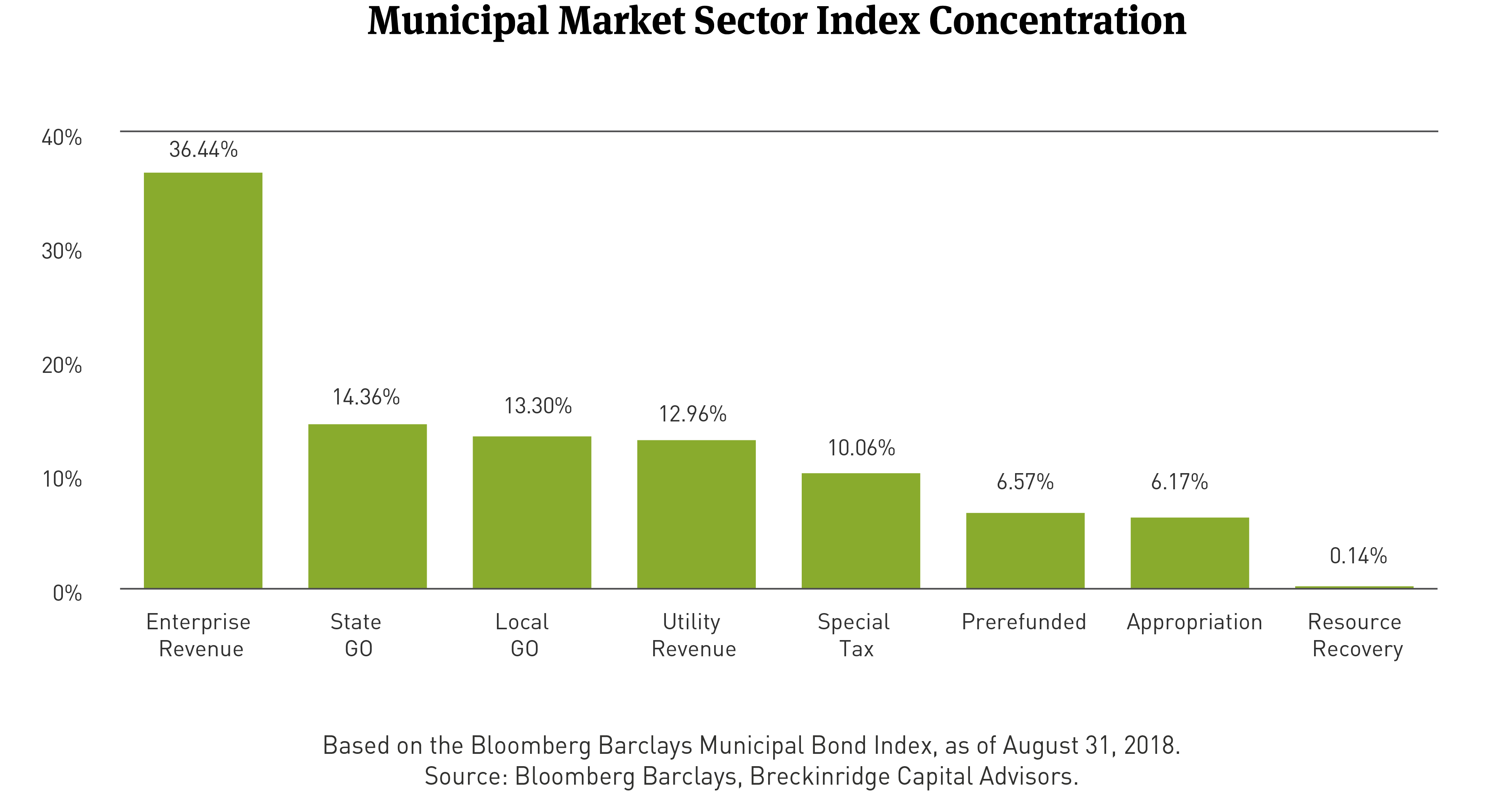 Proceeds are used to build and maintain power generation and transmission facilities, water-sewer and sanitation facilities and other infrastructure. Utility revenue bonds are intended to be insulated from the bankruptcy of a host government under Chapter 9 of the bankruptcy code.

Key Negatives: Bondholders have recourse solely to the pledged utility revenues; other host government resources are not pledged to debt service.

Key Negatives: Subject to market forces and competitive environment; security strength may be weaker than for utility revenue bonds. 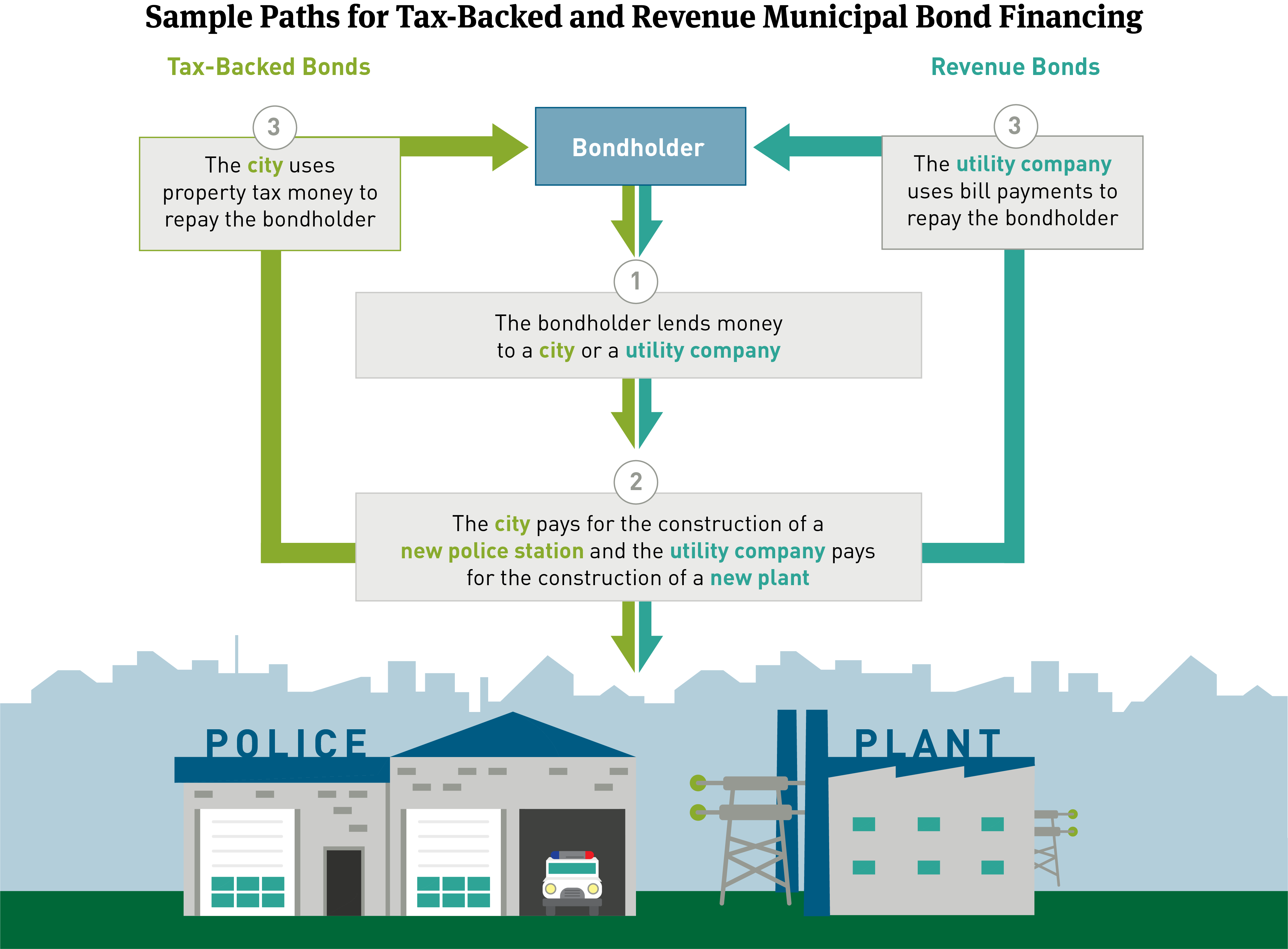 Other Categories of Municipal Bonds

The Tax Cuts and Jobs Act (TCJA) passed in December 2017 prohibited prerefunding tax-exempt bonds. This class of bonds will eventually disappear but prerefunding bonds currently make up between 8 percent and 9 percent of the market.

With municipal green bonds, issuers commit to using proceeds for environmental purposes. Green bonds sometimes come with additional disclosure so that investors can track the use of proceeds, and because investors demand a degree of disclosure presently atypical in the municipal market. Municipal green bond growth has been steady: U.S. issuance totaled $10.4 billion in 2017, versus $4.1 billion in 2015, per S&P. However, the muni green bond market is still in its infancy, and in-depth, fundamental credit analysis remains important for all bonds – even those with the green label (see Look Before You Leap into Green Bonds). We expect more calls for standardization in the muni green bond market as issuer demand for environmental, social and governance (ESG) investments continues to increase.

GOs, education bonds and water-sewer bonds are common in the taxable municipal space but the market overall is fragmented, with many small segments represented. Taxable municipal bonds may also finance projects that benefit a private business or are repaid by private businesses. These projects may have a riskier credit profile relative to other bonds (see Private Activity Bonds below).

Build America Bonds (BABs) were issued by municipal borrowers in 2009 and 2010. The bonds were authorized by the American Recovery and Reinvestment Act. Interest on BABs is fully taxable for investors. Interest costs remain subsidized for the issuer, however, because the federal government pays a portion of annual interest costs for the government that issued the bonds.

With their introduction, BABs opened up municipal bonds to the taxable bond market. Nontraditional municipal investors (such as pension funds and other institutional investors) were the main buyers of BABs. The BAB program was discontinued in 2010. About $181 billion in BABs debt was issued during the program’s runtime.

Private activity bonds (PABs) are municipal bonds that finance projects for the benefit of nongovernmental borrowers. As a general rule, a bond qualifies as a PAB if: (a) 10 percent of the bond proceeds are used in a private business and 10 percent of the principal interest payments are secured by property used in a private business, or (b) more than 5 percent or $5 million of bond proceeds is lent to a nongovernmental borrower.

Interest on PABs is federally taxable. However, some PABs, known as “qualified private activity bonds,” retain tax-exempt status. This includes bonds issued on behalf of nonprofit hospitals and universities, as well as a variety of exempt facility bonds and housing bonds.

Interest on most PABs is subject to the alternative minimum tax (AMT). These bonds are known as AMT bonds. Historically, AMT bonds have traded at higher yields due to the possibility that bond interest may be taxable to an investor. The TCJA increased the tax bracket at which the AMT takes effect, so more investors can purchase AMT bonds without worry that the investment will be taxed.

As we enter 2019, portfolio manager Matt Buscone discusses what’s top of mind in the muni market for our investment team.

Adam Stern, our head of muni research, checks in post election to help highlight some of the biggest outcomes for muni investors.

With community spread of the coronavirus more likely, we are monitoring the effects it may have on credit quality.