The Senate and House of Representatives passed, and President Biden signed the version of the $1.9 trillion American Rescue Plan Act of 2021 (ARP). The ARP is a significant credit positive for municipals, and it may create momentum for a large infrastructure package later this year. Municipal credit quality moving forward is likely to diverge across issuers. Issuers that deploy federal funds substantially for one-time needs (like pre-paying debt, financing capital projects, or capitalizing a reserve) are likely to prove more resilient over time. The current degree of federal support is likely to wane, and issuers that aggressively spend this year’s extraordinary one-time federal dollars on permanent tax cuts or new programs risk creating future budget deficits.

Details of the ARP

The ARP is the largest of the three major pandemic-era stimulus bills in terms of its direct impact on municipal credit. The legislation appropriates roughly $570 billion for aid to municipal issuers (See Figure 1). Among other things, this includes $195 billion in aid to states, $130 billion for local governments, and $31 billion for mass transit providers, including $6 billion for the New York Metropolitan Transit Authority (NYMTA). 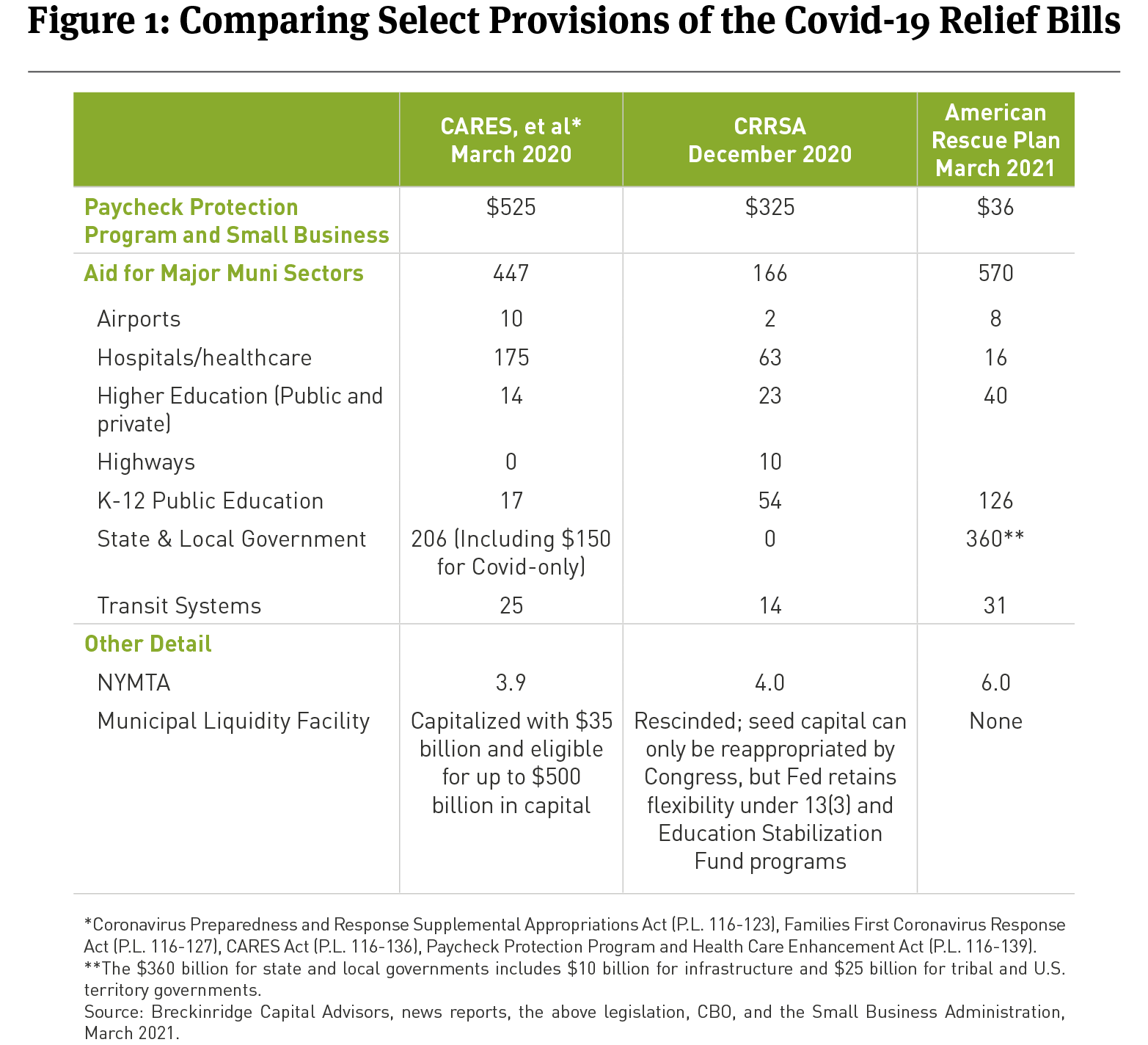 Airports will get another $8 billion, and states that opt to expand Medicaid under the Affordable Care Act could receive $16 billion in increased matching grants.

Ostensibly, the ARP restricts federal aid to pandemic-related costs or revenue losses. It explicitly bars funds from being used to finance tax cuts or pension-funding.1 However, the language around these requirements is loose, and it is unclear whether the Treasury could enforce these provisions, politically. In practice, the aid is likely to be fungible.

The ARP is particularly helpful for k-12 public and higher education providers. It provides $126 billion to public elementary and secondary schools and $40 billion for public and private higher education. The money is disbursed over multiple years (See Figure 2).

The ARP also extends or increases various CARES Act benefits for individuals and businesses. This includes extending enhanced unemployment benefits through September and sending Americans another round of direct checks ($1,400 payments to individuals and households earning $75,000 and $150,000 or less, respectively). It also includes a significant one-year expansion of the child tax credit and a $29 billion support fund for the restaurant industry.

The ARP is likely to mitigate the pace of ratings agency downgrades over the next 12 to 24 months. It may also increase the likelihood for out-year deficits as some issuers use ARP funds to finance tax cuts or expand ongoing programs. Since late December, most public finance sectors have carried negative outlooks at both S&P and Moody’s excepting housing, utilities, and toll roads. However, the sheer scale of the ARP is likely to overwhelm near-term structural credit weakness for many issuers. Agencies may move more sectors to stable. Of note: on March 9, S&P removed the negative outlook on Illinois’ BBB- rating because “economic conditions, federal support, and administrative actions have pulled the rating away from the speculative-grade category” (emphasis added).2

For perspective, the ARP’s state, local, and k-12 public education aid alone is equivalent to 25 percent of 2019 state and local tax revenue3. In combination with previous aid packages since last March, state and local governments have now received federally provided support equivalent to 40 percent of 2019 tax revenue. Each state’s fiscal condition is a bit different, of course. But we estimate that the ARP’s non-school provisions will deliver each state between 9% and 22% of its 2019 own-source state and local government revenue. This figure includes of all revenue sources, not just tax revenue.4

Public sector employment declines may also be overstated. As Figure 3 illustrates, most of the nation’s 1.4 million state and local job-losses have been concentrated in the k-12 public schools and higher education sectors. These job-losses likely reflect the move to remote learning more than outright budget stress.6 Education jobs may return relatively quickly once schools can reopen safely. 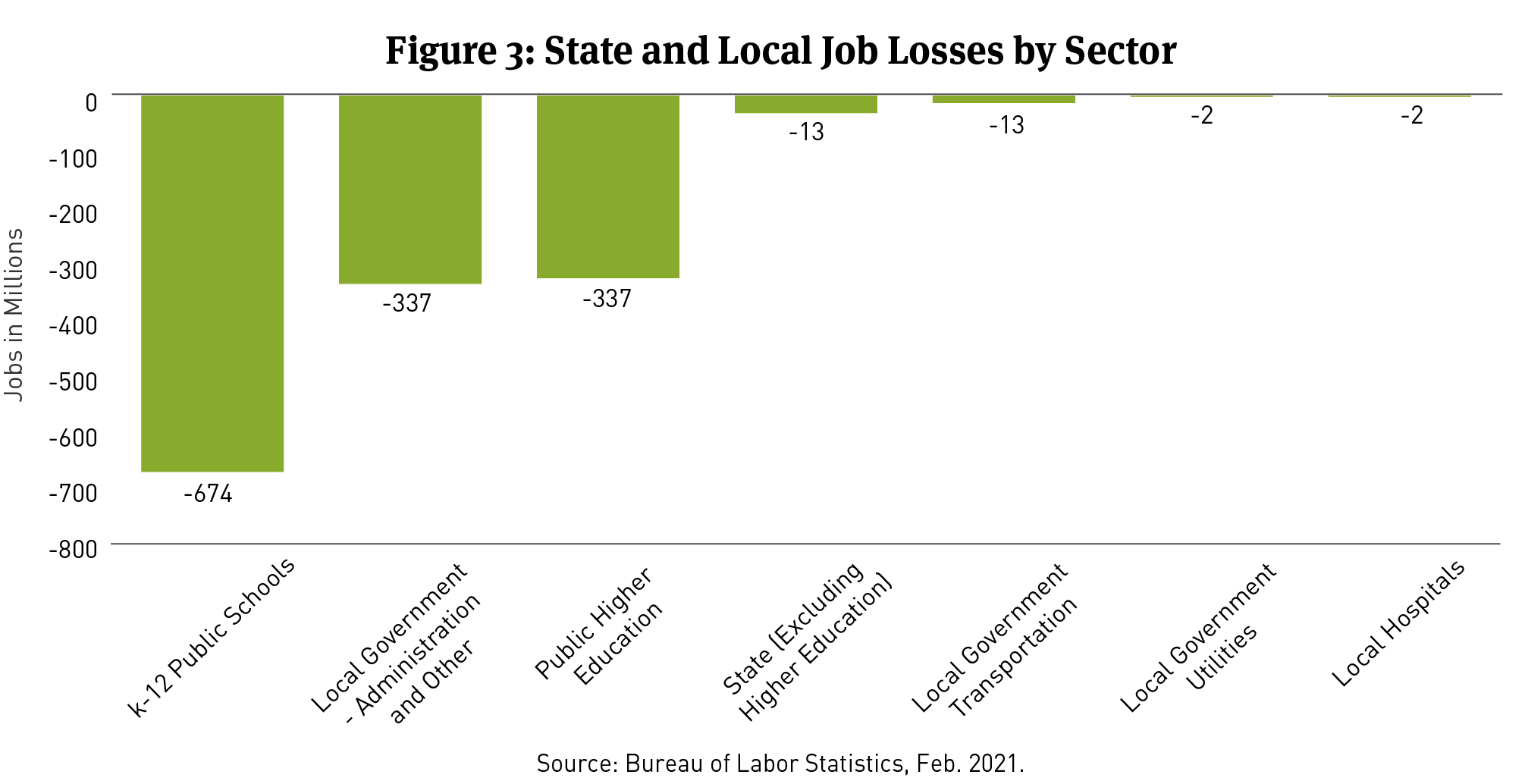 ARP aid will also be extremely helpful for transportation issuers. Mass transit providers will receive $31 billion from the legislation., Cumulatively, federal aid for mass transit will total roughly $70 billion from March 2020 through March 2021. That compares to $11.7 billion in federal grant aid in 2019. There is still a long way to go for mass transit issuers, which continue to report significant declines in daily ridership, but federal support should help stabilize near-term liquidity for most.

Successfully enacting the ARP may also create momentum for an infrastructure bill later this year. House and Senate Democrats now know how to organize their caucuses to pass a large, complex reconciliation bill. They are probably marginally more likely to seek the same path for President Biden’s $2 trillion infrastructure proposal.

The details of Biden’s infrastructure plan remain murky, but any new package would likely increase highway trust fund allotments, bolster grants for clean water and drinking water revolving loan funds, and reinstate advance refundings and Build America Bonds, among other priorities. The plan would also likely include some type of support for climate-related initiatives at the state and local levels.

Notwithstanding the ARP’s positive credit impact, we believe Breckinridge’s bottom-up approach to credit analysis remains essential. It is a near-certainty that some muni issuers will overly rely on federal aid to close near-term budget deficits. For example, New Jersey’s proposed fiscal year (FY) 2022 budget is structurally unbalanced and relies on borrowed funds to close a general fund deficit equal to 7 percent of revenue. Federal aid will help New Jersey close next year’s budget gap, but deficits will reemerge in FY 23. San Francisco’s planned deficits in FY 22 and FY 23 are also likely to be “plugged” with federal aid. While San Francisco remains a strong credit, it too, will face difficult budget decisions in the future. Given the large infusion of federal cash, voters and elected officials are less likely to support balancing operations with tax hikes and spending cuts.

Pension stress and deferred capital maintenance will also remain challenges for some issuers. In the same week that S&P removed Illinois’ negative outlook, Moody’s Investors Service noted that its pension debt had grown to over $300 billion or 37% of gross state product.8 Clark County, Nevada has deferred capital spending to help balance its pandemic-era budgets, and New York State is considering reducing its pay-go capital spending, as well.9

Importantly, some issuers may now be overly dependent on federal support. For example, he NYMTA has now received $14 billion in federal assistance over the past 12 months. That amount of aid is unlikely to be sustained. But the NYMTA has yet to identify revenue and expenditure reforms that will permanently stabilize its long-term finances. Washington’s appetite for spending may wane faster than the market expects. Investors are beginning to worry (slightly) more about inflation. The 10-year Treasury rate has jumped above 1.5 percent in recent weeks. That is a low rate by historical standards, but it is higher than the borrowing rate the Congressional Budget Office (CBO) expected for this year. The CBO did not anticipate a 1.5 percent 10-year rate until 2023. Absent strong and sustained gross domestic product growth, rising yields could pressure the federal debt higher and weaken lawmakers’ willingness—and, possibly, their ability–to support more spending.

Finally, political dynamics can change quickly. It is worth recalling that had Republicans won just one of Georgia’s two Senate races on January 6, the credit outlook for the muni market would be much darker. The Georgia elections, by themselves, may have kept the NYMTA an investment grade credit and forestalled downgrades for several states. A Republican Senate likely would have been much less generous to mass transit or state and local governments. As such, Breckinridge will continue to focus on credits that can finance themselves ably without external assistance.

[1] H.R. 1319, American Rescue Plan, Subtitle M, Sec. 9901. Coronavirus State and Local Fiscal Recovery Funds. For example, an issuer could fund increased pension contributions by using American Rescue Plan dollars to pay for planned capital needs, and then, redirect existing capital dollars to a pension system. Alternatively, an issuer could issue pension obligation bonds to capitalize its pension system, and then, use American Rescue Plan funds to repay the bonds. (This would likely be characterized as repayment of debt, not an outright contribution to a pension system). The pension restriction language in the American Rescue Plan lacks any clause regarding the “substance” of the transaction. It merely states that “no state or territory may use funds made available under this section for deposit into any pension fund.” (emphasis added by Breckinridge).

[3] Breckinridge analysis of the American Rescue Plan and Bureau of Economic Analysis figures.