After a summer of declining yields and Municipal/Treasury (M/T) ratios, Treasury yields increased during the last ten days of September, as investors grew more concerned about potential inflation, Federal Reserve (Fed) policy, and the debates in Washington, D.C. about infrastructure spending and the debt limit. 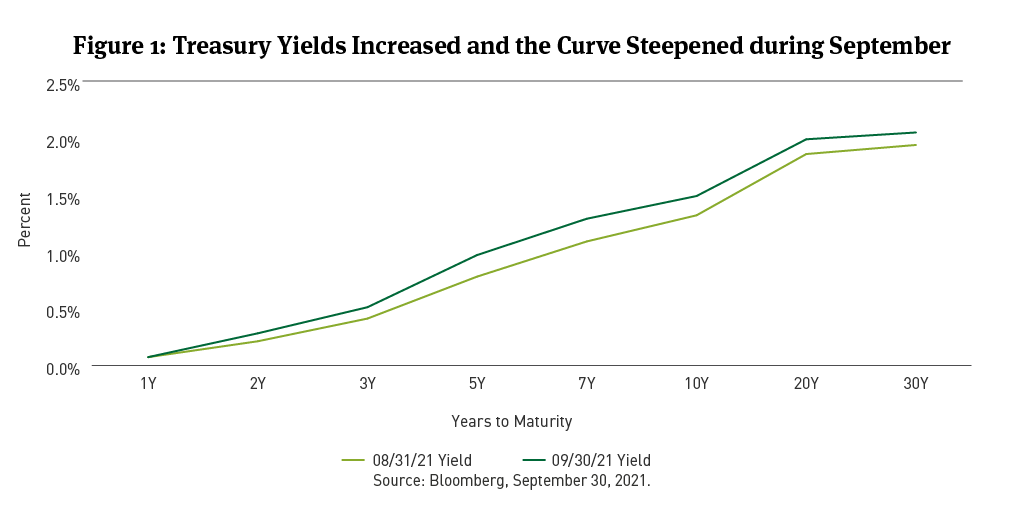 The discussion about transitory versus structural inflation continued, despite a lower-than-expected August Consumer Price Index report. Wage increases and higher shelter and commodity costs indicated price increases may stick around for longer than initially expected.

After its September meeting, the Fed indicated it could raise interest rates next year and its dot plot, indicating Fed Governors’ views of rate increases, shifted, with 9 of 18 members seeing a 2022 hike, up from 7 in June. The Fed also signaled it will announce at its November meeting more information on tapering of the $120 billion monthly purchases of Treasuries and MBS debt if the economy doesn’t suffer a significant setback.1

Daily new COVID-19 cases increased during the summer, reducing airport and restaurant traffic, flattening office traffic, and dampening U.S. consumer confidence, according to the Conference Board.2

Congress and the White House debated infrastructure spending and an increase in the federal debt limit, with a potential default on the government’s debt looming. On the last day of the quarter, Congressional approval of government funding through December 3 did little to assuage the markets and left the debt ceiling limit unaddressed. In the days that followed risk asset values fell, and bond yields increased.

Treasury yields remained in a tight trading range until growing more volatile during the last ten days of the month. Month-end yield changes were higher by 7 to 19bps in the 2- to 5-year range, 18bps in 10 years, and 11bps in the 30-year spot. The 2- to 5-year yield curve (2s5s) steepened by 12bps while the 2s10s curve was 11bps steeper, per Bloomberg data. 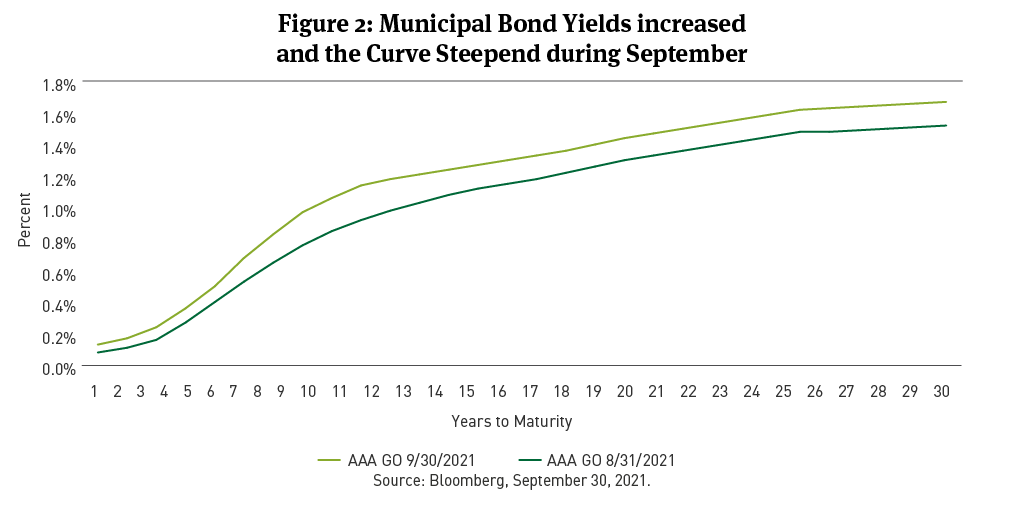 Municipal/Treasury (M/T) ratios mostly improved during September (See Figure 3). Ratios improved in the 2-, 10-, and 30-year spots and fell slightly at 5 years. The steeper curve brought higher ratios and a better entry point for municipals than during 2Q and 3Q. 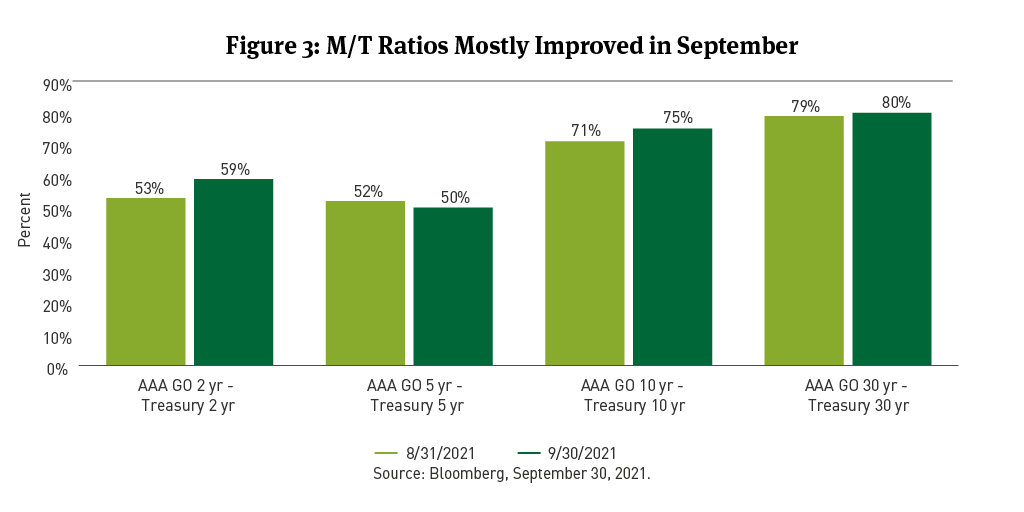 Year-to-date total issuance in 2021 was $346.5 billion through September 30, just 2.5 percent less than the same period in 2020. During 2020, summer new supply benefited from a spate of issuance following reduced activity due to COVID-19 restrictions in the spring. At $6.5 billion, September taxable municipal bond issuance was more than 60 percent lower than in September 2020.

With sustained high demand for bonds in an environment of lower new supply, yields, and M/T ratios, we remained patient entering September. We sought to add value by leveraging our experience and acumen in the secondary and taxable municipal bond markets, where relative values were somewhat better, in our view. Based on historical experience, we continued to anticipate that new issue supply would rebound entering the fall months. Those expectations were realized as September ended and, with the increased volatility in yields, we identified more opportunities to capture better relative values.

The best-performing sectors were Oil Field Services, Refining, Airlines, Independent Energy, and Railroads. The worst-performing were Sovereigns, Gaming, Metals and Mining, Transportation Services and Cable Satellite, according to Bloomberg.

Index-eligible IG bond issuance in September, per Bloomberg, was $184 billion, an increase of nearly 110 percent from August’s low level. Net issuance, after redemptions, was a $79 billion, up from $17 billion during the prior month. Demand for bonds remained strong. According to EPFR, monthly IG fund inflows were about $21 billion in September, bringing the year-to-date total to nearly $304 billion.

Real gross domestic product (GDP) increased at an annual rate of 6.7 percent in the second quarter of 2021, according to the third estimate released by the Bureau of Economic Analysis on September 30, 2021. With a number of issues across political, policy, economic, health, and social strata serving to cloud the outlook, some observers are moderating their estimates for future GDP growth. For example, as of October 1, 2021, the Federal Reserve Bank of Atlanta’s GDPNow forecasting model estimated third quarter gross domestic product growth at 2.3 percent on an annualized basis.

After peaking in 2020, IG corporate leverage has declined due to growth in cash flows and low rates, helping to reduce interest burdens through the refinancing of higher-cost debt. Labor shortages and supply chain disruptions are a risk looking ahead. But profit margins are high relative to longer-term averages and price increases in some sectors may offset rising costs. Current spreads are low relative to historic medians, although there have been periods of prolonged tight spreads. Relative to competing IG asset classes and in a global context, US IG appears to still offer some relative value.

MBS spreads tightened during September, resulting in positive excess returns at almost every conventional and Government National Mortgage Association (GNMA) coupon cohort, particularly among the higher rates. Commercial mortgage-backed securities (CMBS) and Agency CMBS also delivered positive excess returns.
Breckinridge and other participants in the MBS sector now wait for additional clarity from the Fed on its plans to taper MBS purchases. Further demand weakness in the market if and when the Fed withdraws could offer attractive buying opportunities.

Summary: Fiscal Stimulus and Monetary Policy Responses to COVID-19
This summary includes analysis from members of the Breckinridge investment team of the implications for the municipal bond and corporate bonds markets.
Comparing 2020 COVID-19 Market Turmoil to 2008
By Peter Coffin
Breckinridge President Peter Coffin shares thoughts on the turmoil affecting municipal and corporate bonds as the markets and the economy endure effects related to COVID-19.
January 2021 Market Commentary
In January, strong demand and limited supply dominated the bond markets. Read our monthly market summary for details.