Third-quarter bond markets were sedate until investor concerns increased near quarter end about inflation, interest rates, and fiscal and monetary policy. After slipping lower for nearly three months, bond yields returned close to levels at the start of the quarter. The Treasury yield curve flattened.

The debate about transitory versus structural inflation continued, despite a lower-than-expected August Consumer Price Index report. Wage increases and higher shelter and commodity costs indicated price increases may prove more persistent than expected at the start of the year.

At its September meeting, the Fed’s rate-setting committee indicated it could raise interest rates next year.1 The Fed’s dot plot, which indicates Fed Governors’ disposition on rate increases, shifted, with 9 of 18 members seeing a 2022 hike, up from 7 in June.

The Fed signaled it will announce at its November meeting more information on gradual tapering of the $120 billion monthly purchases of Treasury and mortgage debt if the economy doesn’t suffer a significant setback.

In Washington, Congress and the White House wrangled over infrastructure spending and an increase in the federal debt limit, with a potential default on the government’s debt looming. While Congress approved a measure to fund the government through December 3 on the last day of the quarter, the deal did little to assuage the markets and left the debt ceiling limit unaddressed.

For the quarter, total return for the Bloomberg U.S. IG Corporate Bonds Index was flat and excess return versus duration-matched Treasuries was a negative 0.15 percent.

Financial Leverage is Down, and EBITDA Interest Coverage is Up

We view credit fundamentals as a modest strength for the IG market headed into 4Q. Fundamentals are stable to improving, which provides a constructive backdrop for credit in our view.

For the fourth consecutive quarter, businesses reduced the ratio of gross corporate debt to earnings before interest, taxes, depreciation, and amortization (EBITDA) on the back of continued growth in cash flows.

After peaking in 2020, gross leverage was 3.3 times for the mean IG issuer at the close of 2Q (See Figure 1). We expect gross leverage should decline closer to its longer-term averages over the last quarter of 2021 based on the current outlook for continued economic growth and business improvement. 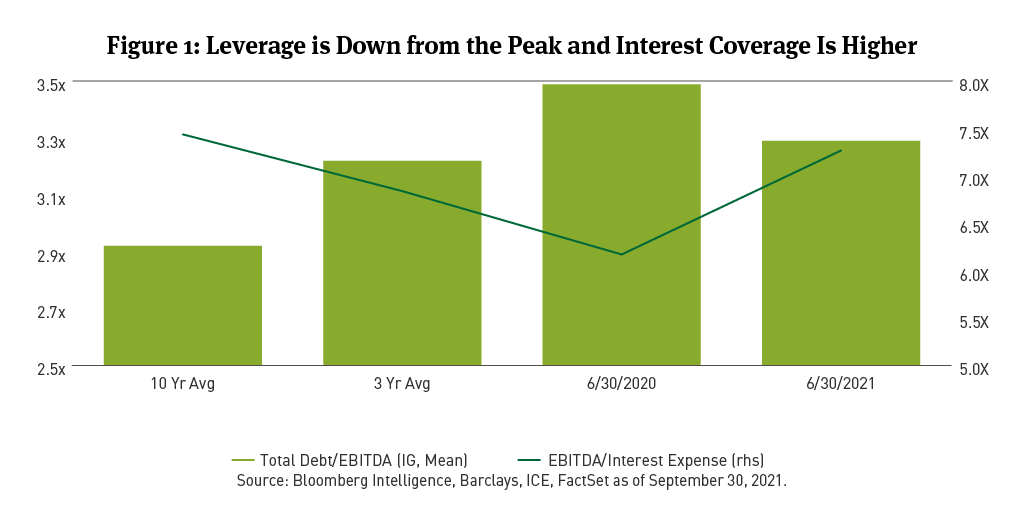 Should earnings grow by 40 percent Y/Y in 2021, as projected by FactSet, leverage should decline further. Shareholder enhancements and mergers and acquisitions (M&A) are swing factors depending on debt usage and both could be a partial offset to the IG corporate credit improvement.

M&A deal value bounced back strongly in 2021 and was at 2019 levels by the end of 3Q. In August, Reuters reported that the U.S. accounted for $2.14 trillion worth of pending and completed M&A to date in 2021, based on data from Refinitiv. With high cash balances and equity valuations, debt-funded M&A is below historical levels year-to-date, a favorable circumstance for fixed income investor. Share buybacks have rebounded but remain below peak levels, while dividends have remained steady. S&P Dow Jones Indices reported on September 23, that preliminary S&P 500 share repurchases were $198.8 billion for 2Q 2021, increasing 11.6 percent from 1Q 2021's $178.1 billion, and up 124.3 percent from a low of $88.7 billion in 2Q 2020.

After dipping during COVID-19 lockdowns in 2020, EBITDA margins have bounced back and are high relative to historical levels for IG companies, at a mean of 27.8 percent at 2Q, above the 10-year average of 25.8 percent, based on Bloomberg data (See Figure 2). 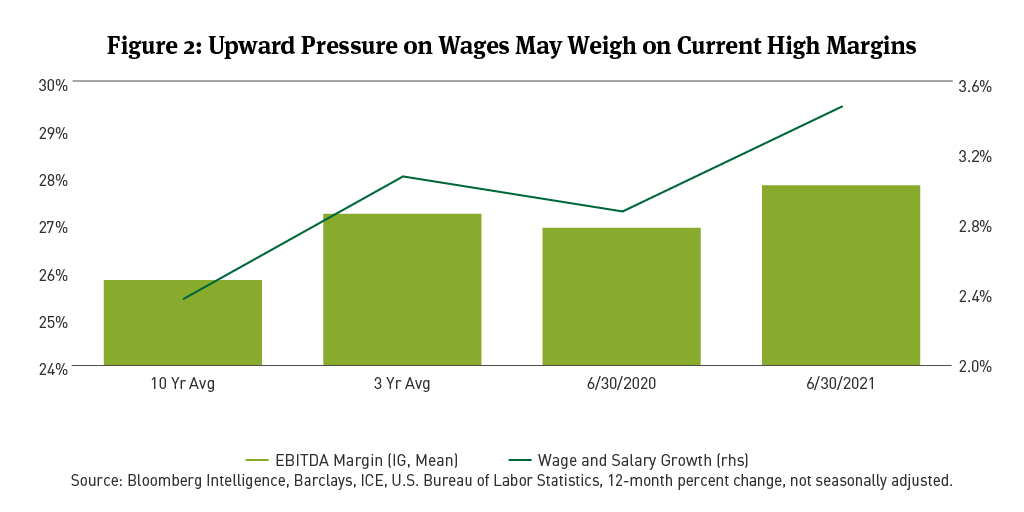 Labor shortages have placed upward pressure on wages in some of these sectors, as well as Home Builders and Building Materials. Wage growth accelerated at 3.5 percent through 2Q.

From a credit fundamentals perspective, there are also implications to consider that are associated with a shifting regulatory backdrop under the Biden Administration. For instance, mega M&A deals are receiving more antitrust scrutiny. Discouraging M&A has mixed ramifications for bondholders. They range from the potential negative effect of restraining business growth to the potential positive effect of limiting corporate indebtedness.

In another instance, we expect that taxes may rise modestly in 2022 but not materially so.

Finally, regulation related to climate change will likely increase. Large Energy issuers may continue to divest assets in response to pressure on climate goals and targets. While these are just a few examples, we mention them to acknowledge the need to closely monitor developments moving forward and their potential to shape fundamental credit quality.

Supply is Healthy, While M&A Debt Funding is Below Average

We view technicals as a neutral influence for the IG market entering 4Q. Supply is healthy while M&A funding is below average. Foreign flows have slowed but domestic flows are strong.

New issue supply marked for M&A funding was a modest 6 percent of issuance YTD, per CreditSights, as compared to about 15 percent in 2019 and an average of 10 percent since 2010.

IG funds received $83 billion and $304 billion of inflows in 3Q and YTD, respectively, per EPFR. Foreign inflows of $77 billion YTD through 3Q were about half the pace of 2020, according to Wells Fargo. 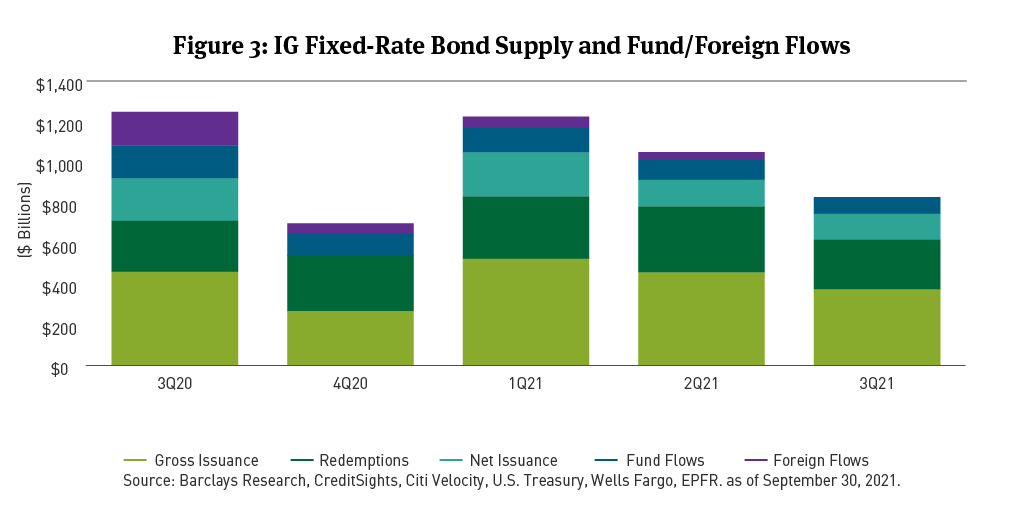 Spreads Moved in a Tight Trading Range during the Quarter

We view valuations as a modest weakness for the IG corporate market. Spreads are tight but they offer some value compared with other IG sectors. Spreads are wider in the U.S. than foreign IG markets.

Corporate spreads moved 4bps wider in 3Q to an average OAS of 84bps, based on Bloomberg data. The BBB segment, widening 4bps, outperformed AAA- through A-rated bonds, which widened 5 bps on average during 3Q. Spreads moved in a tight range, with an 11bps trading range in 3Q. Spreads began the third quarter at 80bps, hit 91bps on August 19, 2021, and then retraced to 84bps by the end of 3Q. 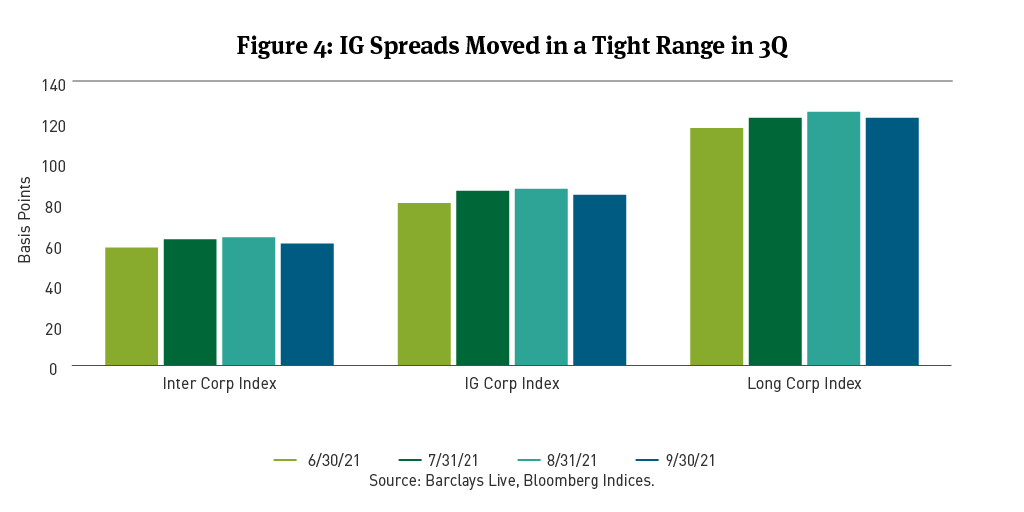 While the 2021 trend continued to elevate the role ESG considerations play among global investors, governments, and communities, the threat of climate change demanded center stage attention.

The September release of Breckinridge’s 2021 Issuer Engagement Report Addressing the Materiality of Climate Change Risk Through Issuer Engagement in September amplifies the importance of climate risk in ESG analysis and provides insights into our discussions with issuers in 2021 about their plans to address the risks.

Corporate awareness of the need to transition to a low- or no-carbon economy appears to be growing. Issuance continues of green, sustainable, or sustainability-linked bonds (SLB) that use proceeds for advancement of sustainability goals.

During 3Q, a European oil company announced plans to raise 1.25 billion euros ($1.5 billion) through an SLB, according to Reuters. SLBs allow firms to raise money for general corporate purposes while promising investors that if they do not meet the sustainability targets set, such as cutting carbon emissions, they will pay bond investors extra interest.

Closer to home, the New York Federal Reserve published a report on climate stress testing during 3Q. The report outlined how the New York Fed is beginning to quantify the systemic risks from climate change on the financial sector.

While the paper has no immediate policy implications, the authors said, it represents an important step towards measuring the climate-related risk exposures of large global banks.

The implications of climate risk and broader ESG factors for bond issuers and investment research continue as a focus for Breckinridge, which integrated ESG and fundamental security research a decade ago, as well as a growing community of investors and bond issuers. 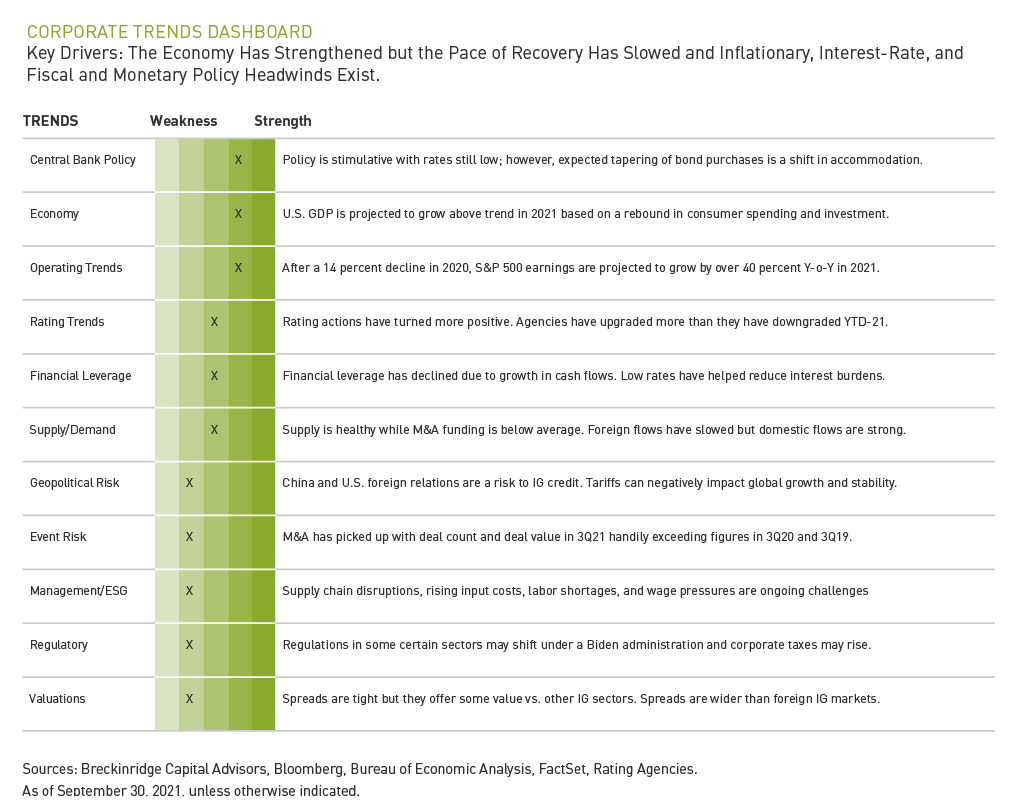 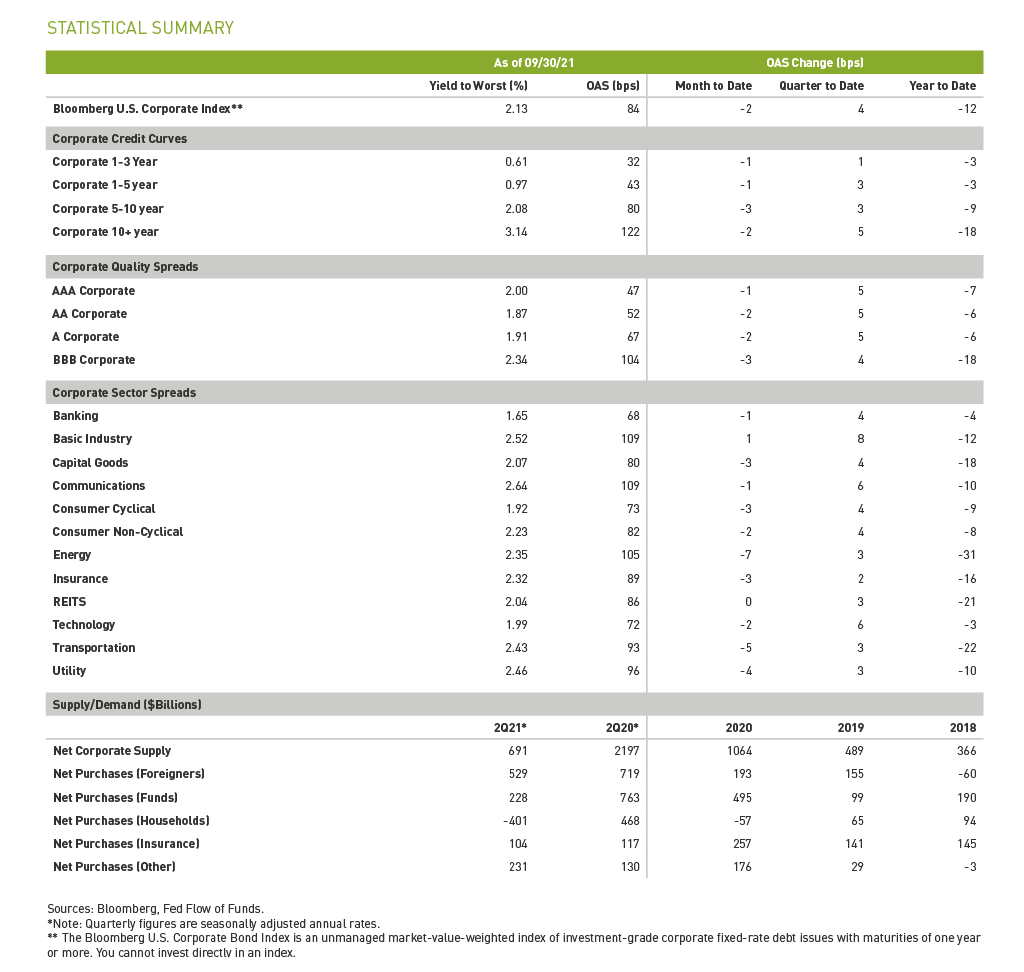 While Breckinridge believes the assessment of ESG criteria can improve overall credit risk analysis, there is no guarantee that integrating ESG analysis will provide improved risk-adjusted returns over any specific time.
Some information has been taken directly from unaffiliated third-party sources. Breckinridge believes such information is reliable but does not guarantee its accuracy or completeness.

The Standard & Poor's 500 (S&P 500) is an unmanaged group of securities considered to be representative of the stock market in general. It is a market value weighted index with each stock's weight in the index proportionate to its market value.

Beyond the Business Case: Recognizing Investor Interest in Sustainability
By Robert Fernandez
Despite some shortfalls in acknowledging the intensifying appeal of ESG investing, companies are making progress in two important ways.
COVID-19 and Corporate Default Rates in Recessions and Depressions Past
By Nicholas Elfner
COVID-19 shutdowns could cause corporate bond defaults. Nick Elfner discusses the resilience of investment grade bond issuers historically.
Q1 2022 Corporate Bond Market Outlook
By Nicholas Elfner
By the end of the fourth quarter, inflation, interest rates, and fiscal and monetary policy held implications for corporate IG bonds.