Central banks around the globe looked to dial back stimulus in October as higher inflation had markets pricing in faster rate hikes than suggested by the U.S. Federal (Fed) Reserve. November opened with the Fed expected to announce tapering, with details around pace, timing, and composition.1

The combination of slower-than-expected Q3 growth and higher inflation expectations caused the Treasury curve to flatten over the month with 2-year and 5-year yields increasing by 20 basis points (bps) while 30-year yield declined. Inflation expectations increased in October, as oil prices hit $84 a barrel, up 74 percent year-to-date, and the core Personal Consumption Expenditures Index rose 3.64 percent year-over-year, boosted by rapid shelter inflation. The Employment Cost Index rose 1.3 percent in Q3, the highest level in 20 years, signaling that labor costs are firming as demand continues to outpace supply. The Breckinridge Investment Committee modestly raised our 2022 yield forecasts for 2-year and 5-year rates to reflect a higher probability of a Fed hike in second half of next year, while keeping our year-end 10-year rate target at 1.75 percent.

The 2-year yield spiked 20bps to 0.50 percent over the month. After hitting 1.70 percent, the 10-year retreated to 1.55 percent by month end, 7bps higher month-over-month. The 30-year dropped 11bps during the month, closing sub-2 percent (1.95 percent). Yields on 20-year Treasuries rose above 30-year bonds as the month ended, on technical factors, including higher demand for more liquid 30-year bonds as well as expectations of more hawkish Fed policy (See Figure 1). 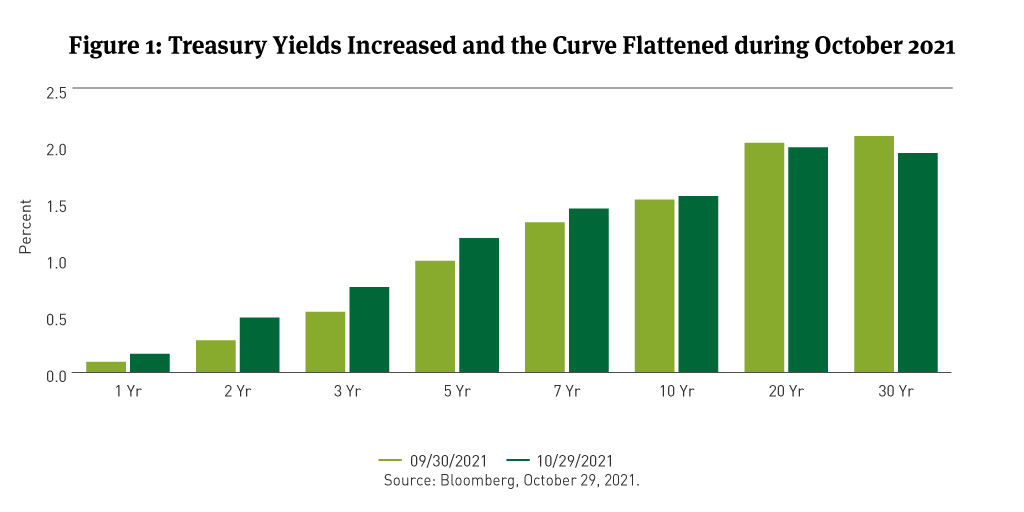 Municipal bond yields followed a pattern similar to Treasuries. Overall, the curve flattened with the largest rise in yields coming in the 5 year maturity while 10- to 30-year yields rose less. (See Figure 2). 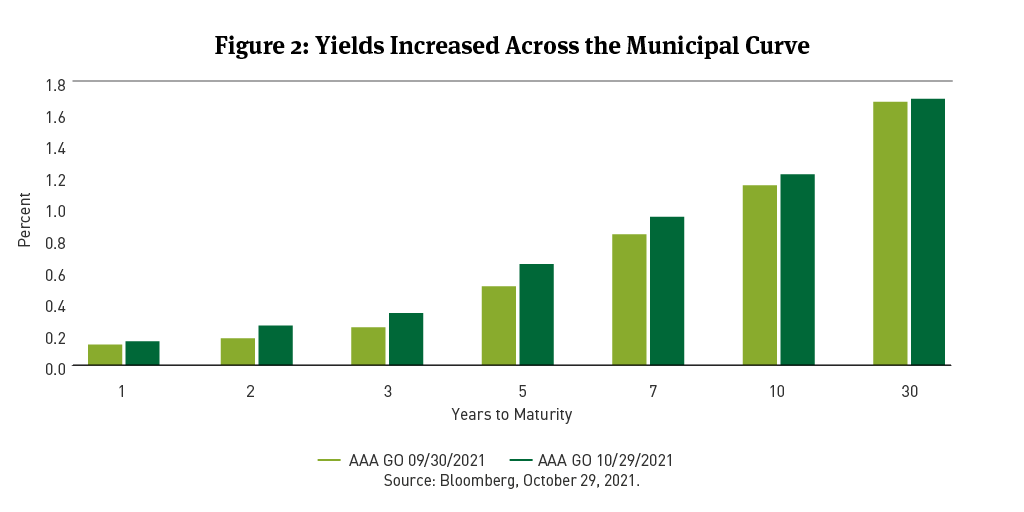 The ratio curve steepened over the month as two-year municipals outperformed Treasuries, while underperforming from 5-years and longer. Higher absolute yields and better ratios represented a better entry point than at any point during 3Q (See Figure 3). 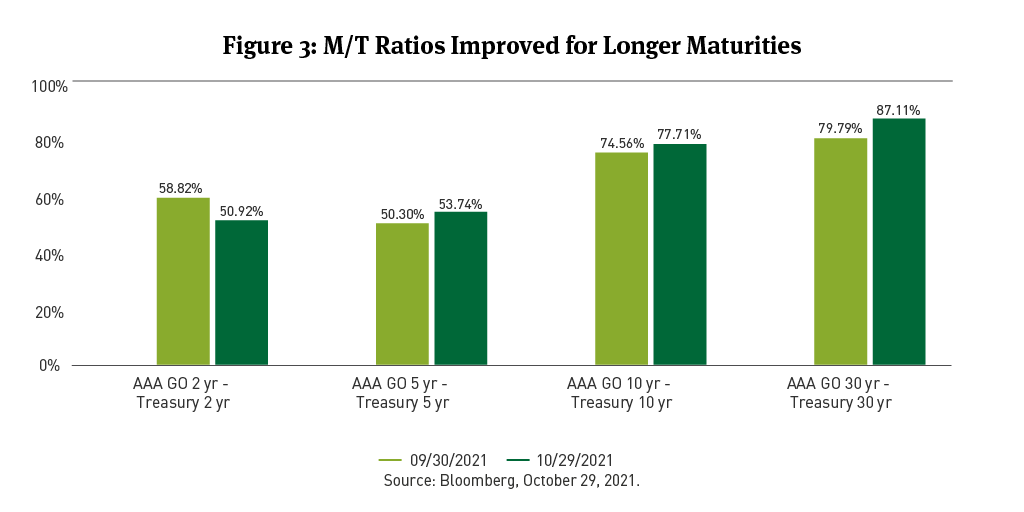 October issuance at $36 billion was 19 percent lower than during the prior month and 51 percent lower than October 2020. The Bond Buyer reported that the total “was on par with a 10-year average, as last year's figures were skewed by COVID-19 market interruptions earlier in the year and the presidential election.”

At the end of October, year-to-date tax-exempt issuance was almost identical to last year’s total at $286 billion. At slightly more than $10 billion, October taxable municipal bond issuance was more than 60 percent lower for the second consecutive month than in the same period during the prior year.

Index-eligible IG bond issuance in October, per Bloomberg, was $143 billion, a decrease of about 26 percent from September. Net issuance, after redemptions, was a $67.5 billion, almost $12 billion lower than the prior month. Demand for bonds remained solid. According to EPFR, monthly IG fund inflows were about $5 billion in October, down from $25 billion in September, but still bringing the year-to-date total to about $314 billion.

Treasury yield curve flattening during the last week of October last week erased some outperformance earlier in month among higher coupon MBS. MBS index was about flat from excess return perspective for month.

CMBS and Agency CMBS delivered excess returns of 6bps and 11bps for the month, according to Bloomberg data.

In the ABS segment of the market, new issue volume for October increased 11 percent year-over-year to $27.6 billion. Year-to-date volume is 43.1 percent higher compared to the comparable period last year; 11.7 percent higher than comparable 2019 period. Overall spread performance for month was mixed, with some esoteric sectors tightening 5bps month-over-month, while other sectors, such as auto lease, subordinate auto loan tranches, and equipment, widened 3 to 5bps.

[1] On Wednesday, November 3, the Fed announced it will reduce its bond purchases by $15 billion a month in November and by a further $15 billion in December. According to The Wall Street Journal, the announcement acknowledged that similar reductions in the pace of net purchases “will likely be appropriate each month,” though officials would be prepared to adjust that pace “if warranted by changes in the economic outlook.”

Neither Bloomberg nor Barclays approves or endorses this material or guarantees the accuracy or completeness of any information herein, or makes any warranty, express or implied, as to the results to be obtained therefrom and, to the maximum extent allowed by law, neither shall have any liability or responsibility for injury or damages arising in connection therewith.

November 2021 Market Commentary
Bonds rallied on market uncertainty as concerns over Omicron and inflation increased.
March 2022 Market Commentary
As inflationary pressures persisted and the Federal Reserve responded in March, investor uncertainty and market volatility increased.
Duration 101
By Jeremy Jenkins
Duration is one of the most important concepts for bondholders to understand as they review the performance of their fixed income investments.