The Treasury curve flattened during June as yields increased more significantly from 1 to 5 years when compared with increases realized from 10 years to 30 years (See Figure 1). The Federal Reserve (Fed) increased the federal funds rate by 75bps in June. 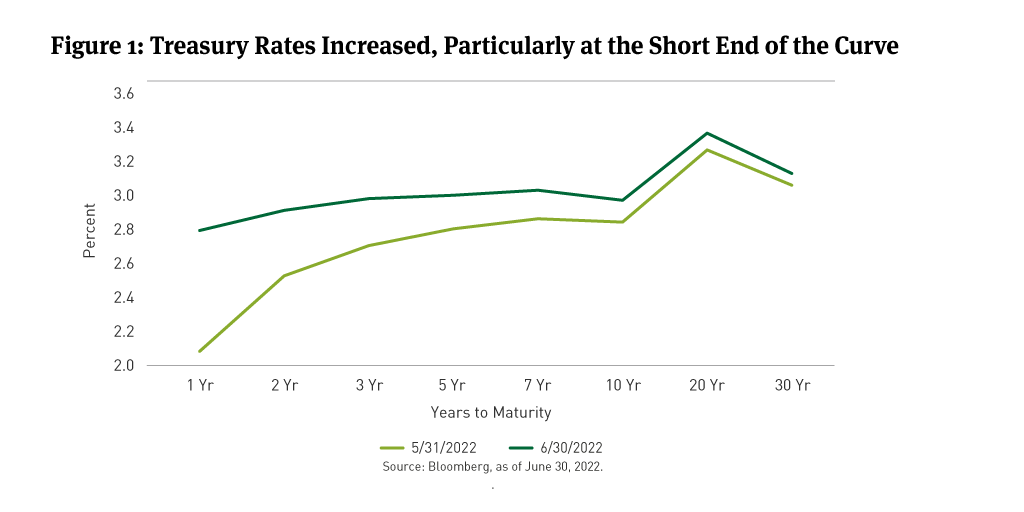 In combination with the Fed’s rate action, commentary from members of the Board of Governors clearly established a resolve to bring the rate of inflation under control, even at the risk of contributing to recessionary conditions. The effect was to launch another round of market volatility that dominated the month. 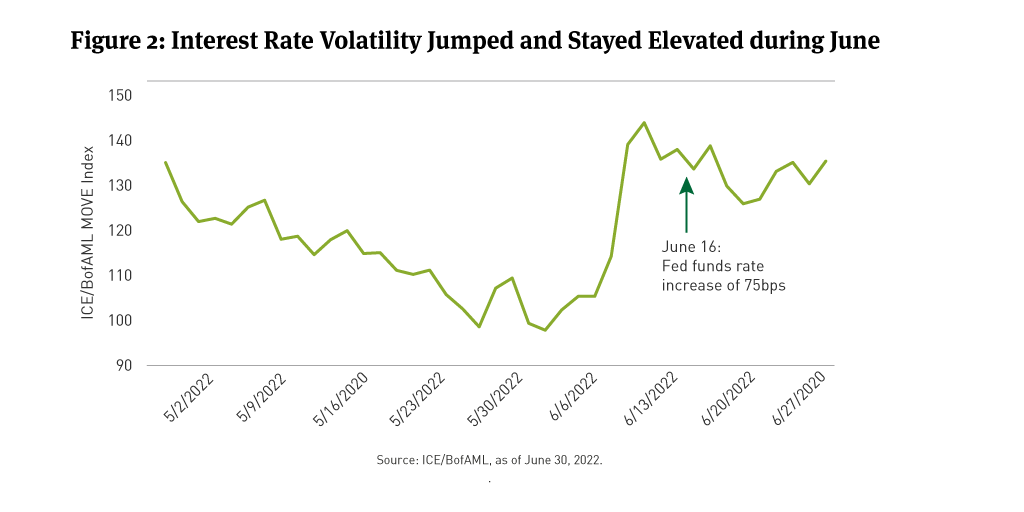 Inflation expectations fell during the quarter. The 5-year Treasury Inflation-Protected Security (TIPS) breakeven, a common measure of interest rate expectations, was 2.58 percent by the end of June, compared to 3.56 percent on March 31. We expect the Fed to maintain its efforts to lower the inflation rate with fed funds rate increases.

Many market commentators expect another 75bps increase at the Fed’s July meeting and at least a 50bps increase at its September meeting. We are more circumspect. With no meeting in August, key data—Consumer Price Index, Personal Consumption Expenditures, and unemployment, to name three—could put the markets and the Fed in a much different position three months hence. Over the last several years, the Fed has expressed its intention to act based upon data, so the September meeting is difficult to predict at this time.

Consumer and business survey readings showed deteriorating sentiment as the quarter closed. The outlook for second quarter gross domestic product (GDP) was negative. As of June 30, the GDPNow model maintained by the Federal Reserve Bank of Atlanta estimated a negative 1.0 percent seasonally adjusted annual rate real of GDP growth for the second quarter. If realized, it would be the second consecutive quarterly negative result for GDP, which historically has been a definition of a recession.

In the view of the Breckinridge Investment Committee, inflation should moderate with growth slowing, as the Fed continues on its path to tighter monetary policy. The nature and length of a period of lower economic activity remains uncertain.

As the outlook for the economy in 2023 shifts from the higher growth levels of the last several years, solid credit fundamentals continue to characterize the corporate and municipal bond markets entering the second half of 2022, although they may have peaked in our view. To a greater extent than credit concerns, technical factors—bond issuance, fund flows, and liquidity—have influenced the markets during the first half of the year. Positive shifts in technical conditions—heightened issuance and buying activity—would auger well for relative value opportunities, in our view, as we seek opportunities to position our portfolios favorably in a changing market. 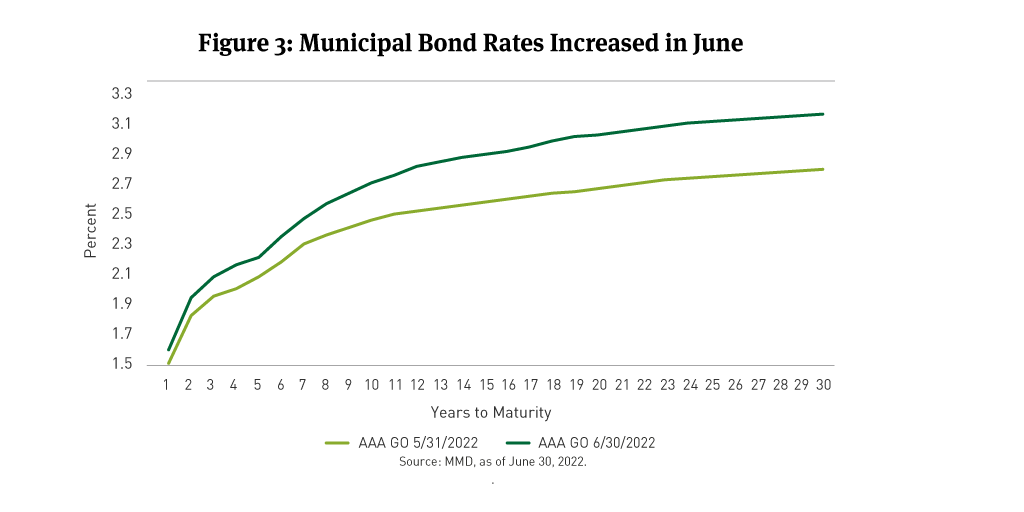 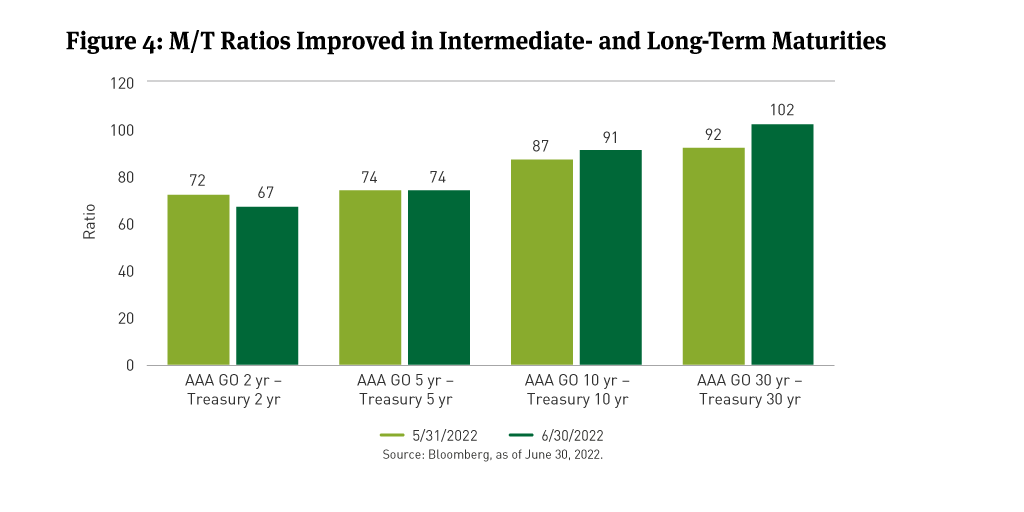 The ABS market enjoyed a solid month of performance relative to other sectors of the bond market. ABS backed by auto loans (9bps) and those backed by credit card debt (47bps) both delivered positive excess returns for June.

Neither Bloomberg nor Barclays approves or endorses this material or guarantees the accuracy or completeness of any information herein, or makes any warranty, express or implied, as to the results to be obtained therefrom and, to the maximum extent allowed by law, neither shall have any liability or responsibility for injury or damages arising in connection therewith.

Breckinridge Backs New HCM Disclosure, Transparency Rules
By Robert Fernandez
Breckinridge responded to the Securities and Exchange Commission’s proposal to amend Regulation S-K and rules for human capital management (HCM) disclosure.
Summary: Fiscal Stimulus and Monetary Policy Responses to COVID-19
This summary includes analysis from members of the Breckinridge investment team of the implications for the municipal bond and corporate bonds markets.
A powerful conversation between our CIO and CEO of Girls Who Invest
Former CIO Laura Lake and GWI's CEO Janet Cowell, discuss their paths in the industry and why this organization is important.