The world was captivated by the U.S. Women’s National Team as they captured their second of back-to-back FIFA Women’s World Cup titles with a victory over the Netherlands. The confidence exuded by the U.S. on the largest stage in women’s soccer was a stark contrast, however, to the more cautious tone seen in U.S. monetary policy.

There was a noted change in the tone of the Fed after the June FOMC meeting, as the patient language was removed due to a slowdown in global growth and concerns over the impact of a drawn-out trade war. Additionally, weaker readings on global manufacturing data, lower job growth in the month of May and a decline in consumer sentiment all bolstered the case for a rate cut. Notably, the Chicago PMI reading came in below 50 for June, down from 54.2 last month. 1Q19 GDP growth was finalized at 3.1 percent, yet many estimates for 2Q19 have fallen below 2 percent. The idea that low inflation may be more transitory was tested in May with year-over-year PCE coming in at 1.6 percent. In addition, trade uncertainties have been weighing on business sentiment. This led to eight FOMC members calling for rate cuts this year, compared to no calls in March. 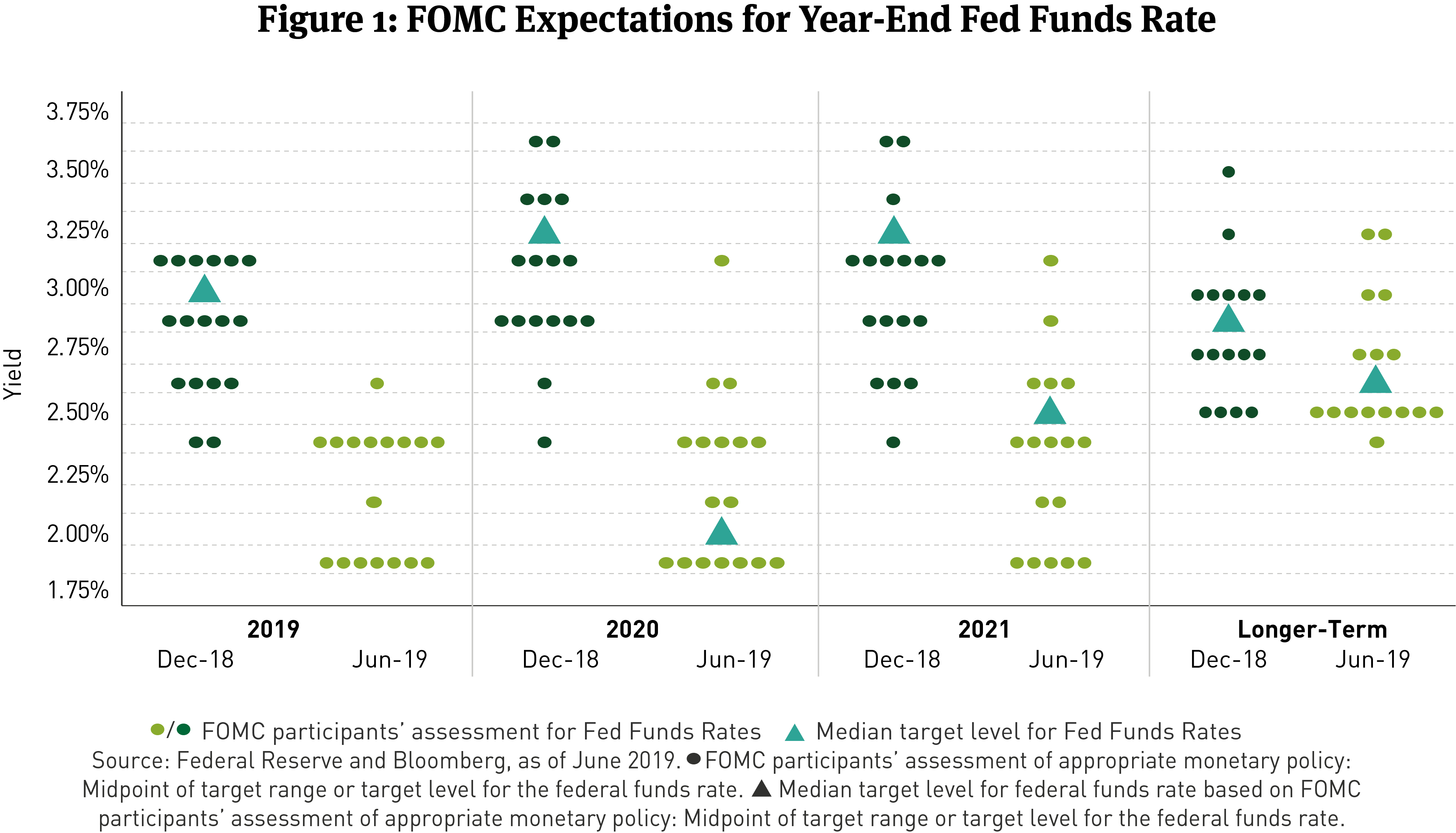 With modestly weaker economic data and expectations for multiple rate cuts, Treasury yields fell. Shorter maturities were lower and the 10-year ended the month at 2 percent, reaching levels not seen since 2016. Short Treasuries remained inverted while the 2s10s curve steepened due to rate-cut expectations. The value of sovereign debt with negative yields hit a record $13 trillion in June, per Bloomberg.

In June, the Bloomberg Barclays Municipal Bond Index continued its positive performance streak, posting a total return of 0.37 percent for the month; the index is now up 5.09 percent for the year as of June 30. June returns were strongest for the five-year maturity, while bonds rated BBB and A continued their strong runs. We have seen record inflows of $43.8 billion into municipal funds in the first half of 2019, marking 25 straight weeks of inflows per Lipper. This strong demand in funds continued to support performance of the municipal bond market.

Municipal yields closed the month at year-to-date lows. However, they did not keep pace with the fall in Treasury yields, resulting in the cheapening of municipal/Treasury across the curve.1 We expect lower ratios to return in July and August, due to record inflows coupled with elevated coupon and maturity payments. Estimates show that August maturities may total $32.6 billion, marking the second-largest maturity month of 2019, while net negative issuance could hit $45 billion.2

While June’s supply at $33 billion was the largest month of new issue supply for 2019, downward pressure on supply continued with Q219 nearing $89 billion, down over 11 percent from Q218. 1H19 issuance has fallen short of estimates, and demand remained exceptional as the cap on the SALT deduction continued to draw investors into tax-exempt assets.

Municipal credit fundamentals remain benign. According to the National Association of State Budget Officers as of June 2019, 32 states expect fund balance to grow in FY 20, with the mean reserve position for a U.S. state rising to 7.1 percent of general fund revenue. As a sign of confidence, new money issuance and state and local capital spending has increased on a year-over-year basis.

Deleveraging Continues as a Defensive Standout

For the month, returns were highest in lower-rated and longer-duration segments of the market. According to the Corporate Index, the best-performing sectors were Telecom, Cable, Food & Beverage, Metals & Mining and Chemicals. The worst-performing sectors included Packaging, REITS and Construction Machinery. At the rating level, BBBs outperformed, with spreads tightening 16bps compared to AAs and As, which tightened 9bps and 12bps respectively. Credit curves flattened as short maturity (1-3 year) spreads tightened 5bps versus 20bps of tightening for longer maturities (10+ years), per Barclays.

The swift tightening of spreads was reflective of strong technicals. IG corporate fund flows accelerated, with $20.4 billion in inflows bringing total year-to-date inflows to $142 billion, twice as large as the inflows in 1H18.3 Additionally, gross IG corporate new fixed-rate issuance declined by 22 percent from $109.2 billion in May to $85.2 billion in June.4

MBS had a modestly positive month, producing 2bps of excess return over U.S. Treasuries, and year-to-date total return stands at 4.17 percent, per the Bloomberg Barclays U.S. MBS Index. Net supply of MBS is below forecast to start the year, as the securitization rate has dropped, and new and existing home sales have been volatile and clouded by seasonal/weather related impacts.

The U.S. Refinance Index spiked over the quarter, reaching highs ahead of the June FOMC meeting. The Refi index has shown responsiveness to the rally in U.S. Treasuries after three years of virtual stagnation. The level of refinancing risk has come into clear focus as 30 percent to 40 percent of the conventional 30-year mortgage universe has at least 50bps of refinancing incentive. Many of these mortgages were originated within the last year, as older vintages have seen lower rates. 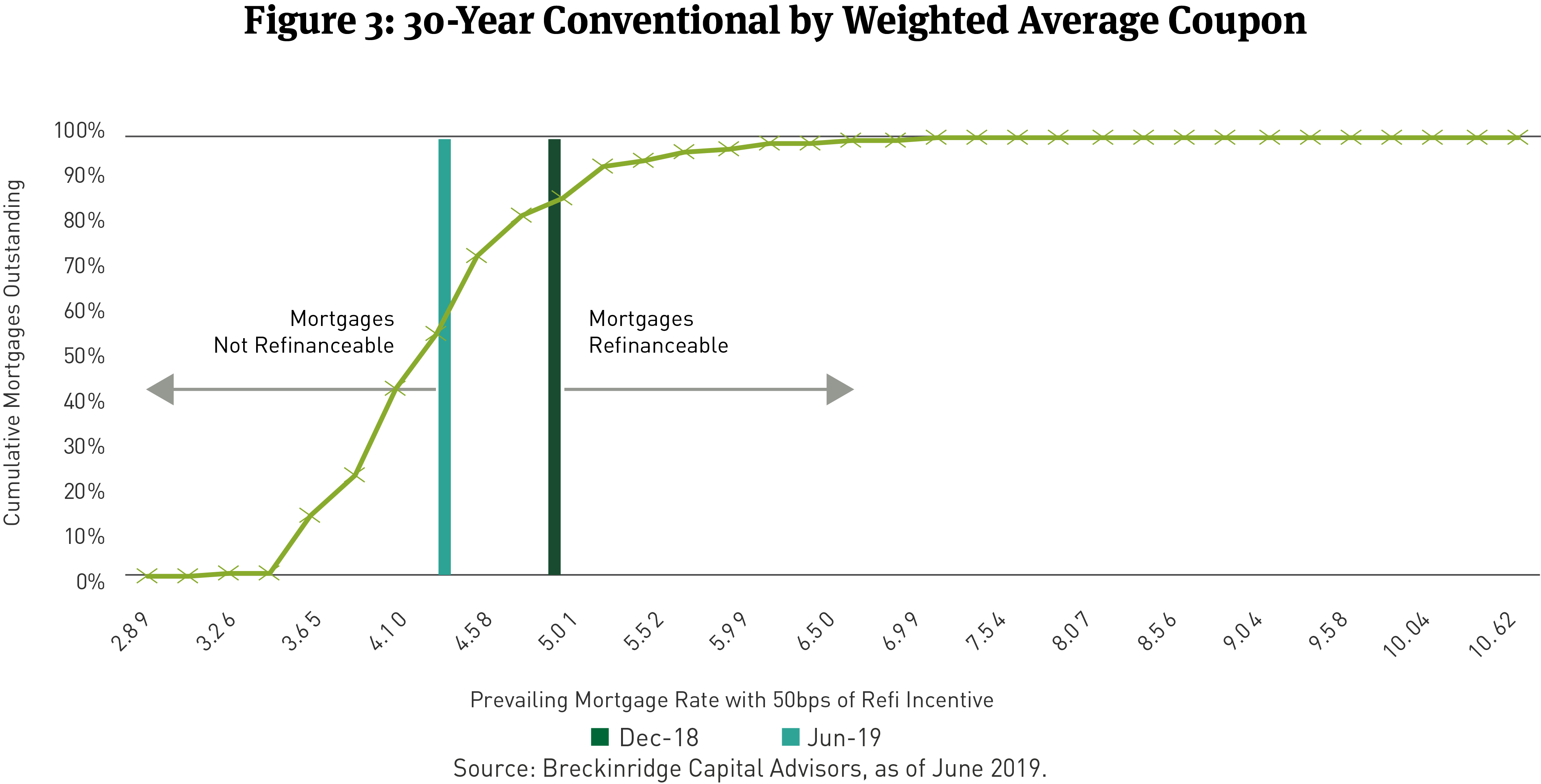 ABS excess returns lagged in June, with negative 13 bps excess return in June, per the Bloomberg Barclays ABS Index. The two-year swap spreads went negative for the first time ever in June; however, nominal spreads versus swaps widened more to offset and caused the sector to underperform. In contrast to ABS, agency CMBS posted positive excess return over U.S. Treasuries for the month, and year-to-date total return stands at 6.02 percent, per the Bloomberg Barclays Agency CMBS Index. Agency CMBS net supply totaled $36 billion though end of June, as the sector continues to take market share from the conduit sector. The built-in prepayment protections protect cash flows into rate rallies and hard final maturities create a bullet-like positively convex security. 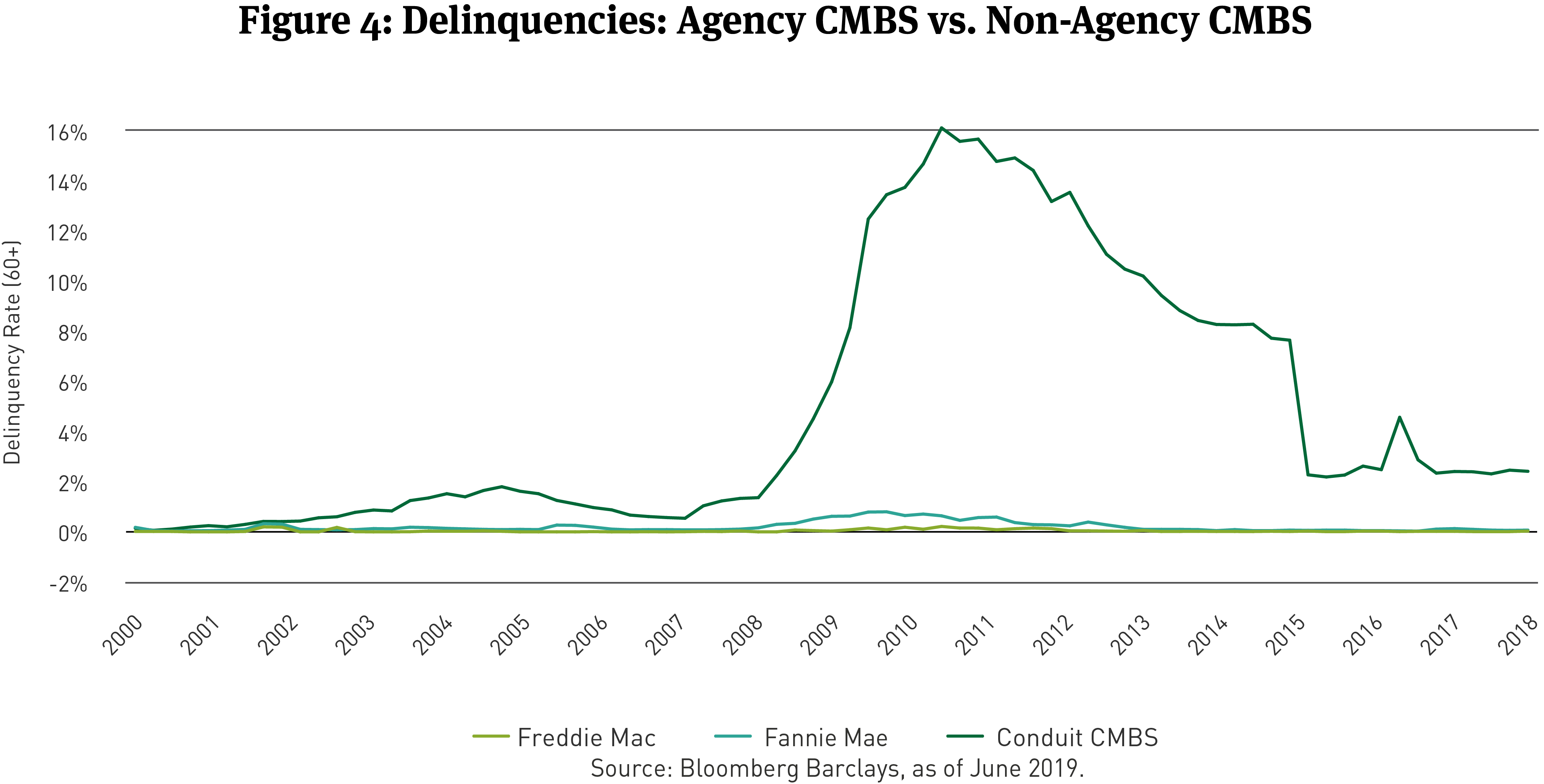 In May, muni fund inflows continued at their record-setting pace and IG corporate spreads widened primarily due to uncertainties with trade negotiations.

This month the investment team recaps November and provides some perspective on our market outlook for 2020.

Many fixed income investors are concerned about the recent rise in interest rates being widely reported in major financial news.