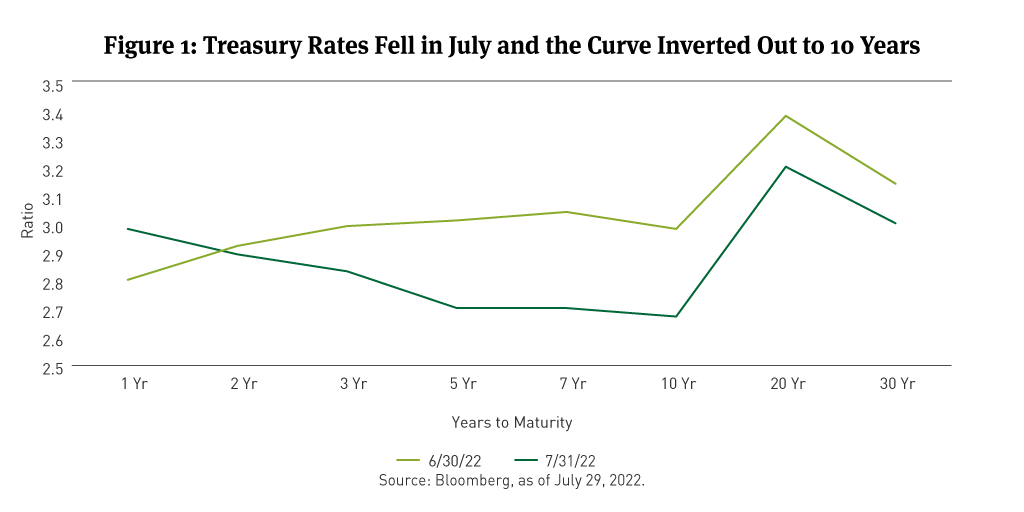 As Treasury rates declined, the yield curve inverted. At July 31, the 2-year Treasury yield was 2.89 and the 10-year yield was 2.65 percent.

At its July meeting, the Federal Open Market Committee hiked the fed funds target rate range to 2.25 percent to 2.50 percent, an increase of 75bps. Still, some commentators considered Chair Powell’s media comments to be more dovish compared with the tone following June’s 75bps increase. The Fed’s own dot plot suggests a median forecast of 3.50 percent for the funds rate by the end of 2022, which would assume another 100bps in hikes, including a projected 50bps increase at the September meeting.

While two consecutive quarters of negative GDP changes may technically define a recession, many observers hold that the National Bureau of Economic Research (NBER) is unlikely to call it so given the low level of unemployment, positive payroll growth, and distortions declining inventories and net exports.

The Q2 Employment Cost Index suggested that wage growth continued to run above 5 percent, in contrast to softening in the average hourly earnings figures.

Weaker economic readings also were offset by consumption growth, which slowed to 1.0 percent in Q2 from 1.8 percent in Q1, the BEA reported. Personal income and spending grew 0.6 percent and 1.1 percent in June, respectively, although real spending adjusted for inflation was just 0.1 percent. For June, the Personal Consumption Expenditures (PCE) and Core PCE deflator were in line with consensus at 6.8 percent and 4.8 percent growth year-over-year, respectively 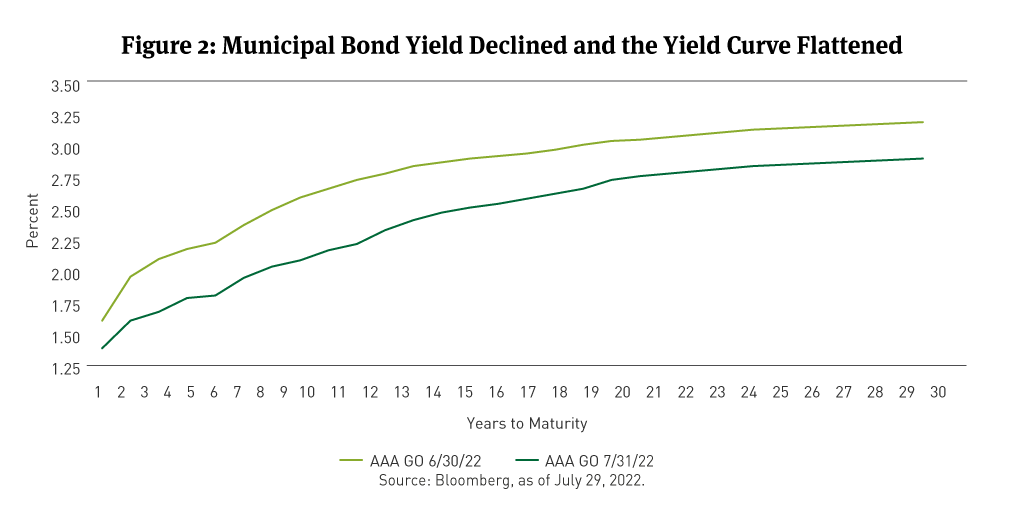 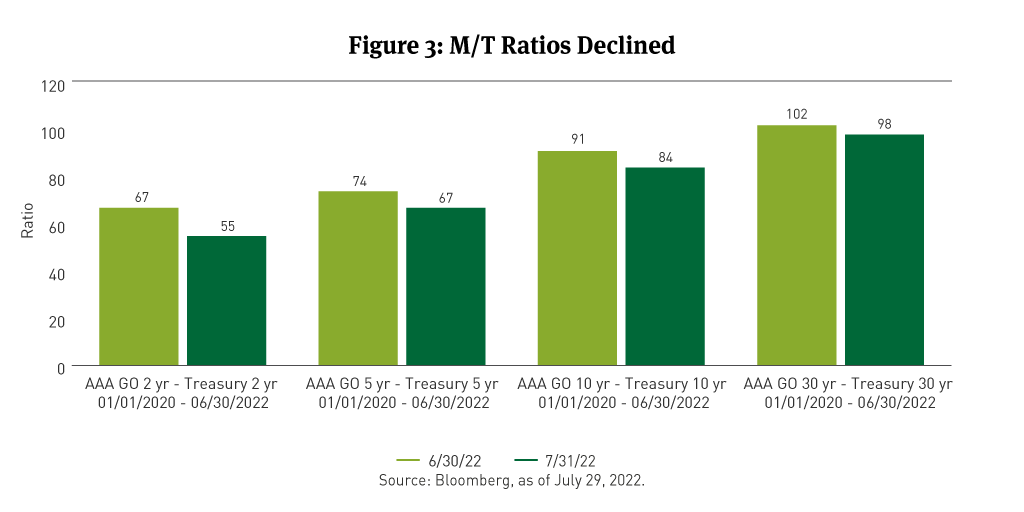 Municipal bond supply repeated a familiar historical pattern by falling in July. July's total issuance was down 32 percent year-over-year (y/y), according to The Bond Buyer. Issuance of taxable municipal bonds and refunding led the trend lower.

Refundings are almost 77 percent lower than last year, as higher yields have eliminated the potential for interest rate savings.

Lower new-issue supply and a decrease in mutual fund outflows helped support the rally in July.

With fund flows potentially turning positive and August typically being a net negative supply month, we continue to expect the technical environment to be supportive as the summer closes.

July for mortgage-backed securities was the best month on record in terms of excess returns over duration matched Treasuries, with the Bloomberg MBS Passthroughs Index earning an excess return of 129bps. The notable performance helped to recapture a sizable portion of the cumulative year-to-date underperformance, which stood at 0.48 percent by month-end.

Across the sector, bonds with coupons ranging from 2 percent to 3.5 percent delivered excess returns of greater than 100bps.

Within CMBS, agency-CMBS underperformed while non-agency had a strong month producing 20bps of excess returns.

July 2021 Market Commentary
In July, the persistency of low rates and strong supply were overriding factors as bond investors looked ahead to the second half of the year.
February 2021 Market Commentary
Bond investors welcomed higher yields and a steepening yield curve during February.
When to Bench the Municipal Bond Benchmark
By Christopher Day
Investors in municipal bond strategies should exercise caution when using indices to set portfolio structure or performance targets.