Second quarter gross domestic product (GDP) was estimated by the U.S. Bureau of Economic Analysis (BEA) to be 6.5 percent on a seasonally adjusted annual rate. The below-expectations measurement may suggest that post-pandemic growth peaked in the quarter.1

After learning of the lower GDP measure, several Wall Street banks lowered forecasts for growth over the balance of the year, pointing to the fading effect of fiscal stimulus, higher prices, and spread of the COVID-19 Delta variant as potentially slowing economic activity.

The U.S. Department of Labor reported initial claims for state unemployment benefits fell by 24,000 to a seasonally adjusted 400,000 for the week ended July 24. Economists polled by Reuters had forecasted 380,000 applications for the latest week.2

Inflation measures continued to run hot, with the GDP price index and core personal consumer expenditures coming in at 6 percent and 6.1 percent for the second quarter, according to BEA data. The debate continued over whether inflation signals were transitory or more persistent.

Despite the strong growth and high inflation readings, Treasury yields continued to fall with 10- to 30-year yields lower by 21 and 20 basis points (bps), respectively, flattening the yield curve (See Figure 1). 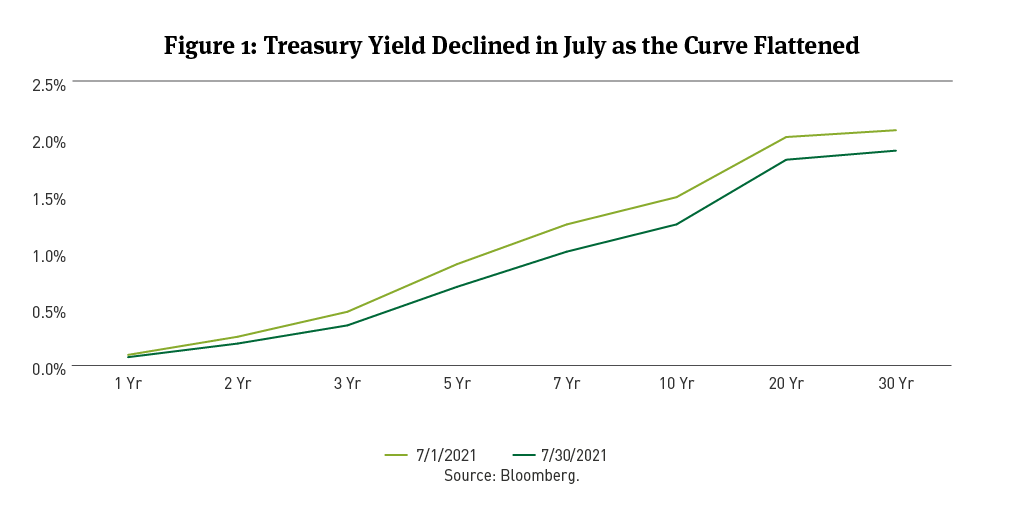 In our view, reasons for falling yields included market perceptions that economic growth and inflation signals peaked, high demand for bonds as large investors rebalance into fixed income after strong equity market performance to date, a continued advantage enjoyed by U.S. Treasuries relative to bonds outside the U.S., and investors who anticipated higher rates repositioning because yields moved in the opposite direction.

The Fed continued to lay the foundation for tapering its bond purchases, but timing, composition and pace remained unspecified after the July meeting.

Expectations during this time were for an announcement in September that tapering may begin in Q1 2022, with proportional reductions of Treasury and MBS purchases.

The municipal yield curve modestly flattened during July as longer maturities continued to outperform. The 2s5s curve flattened 3bps, while the 2s10s and 2s30s curves were 7bps and 1bp flatter, respectively (See Figure 2). 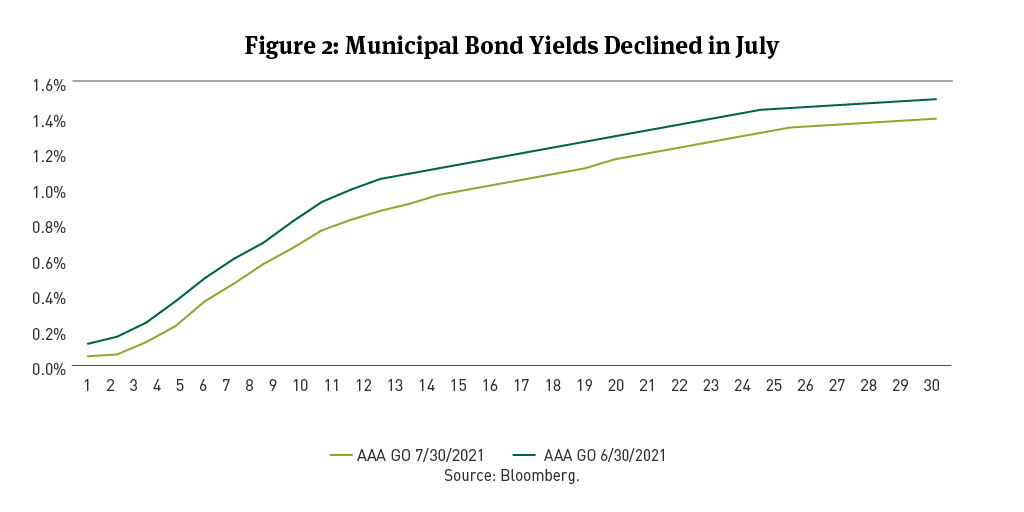 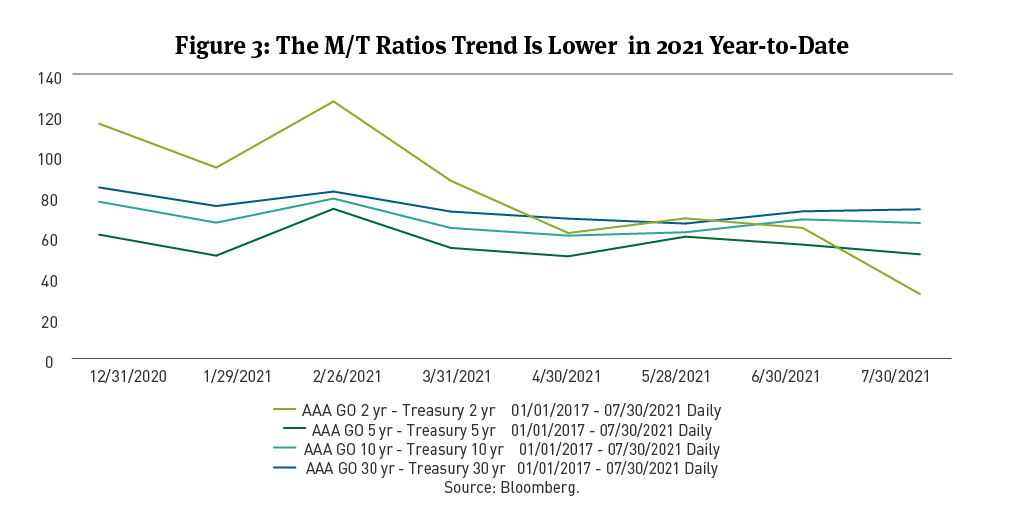 Supply and demand technicals supported the market. According to The Bond Buyer, July’s issuance totaled $31.9 billion, a 35 percent decrease from the prior month and 33 percent lower than July 2020. The Bond Buyer attributed part of the year-over-year decrease to issuance delays earlier during 2020 related to COVID-19. The 2021 year-to-date total issuance was at $263 billion year-to-date versus $258 billion in the same period in 2020 and an average of $227 billion through July in each of the last 10 years.

Municipal bond fund flows were positive in July. Average weekly inflows of about $2 billion per week brought year-to-date flows to approximately $60 billion, according to ICI data.

In this low-yield and rich-ratio environment, we continued to be selective. The taxable municipal bonds and secondary markets offered opportunities to add some additional spread and yield. However, we expected opportunities would improve as market technicals shift with increased supply and seasonal demand abates in the weeks ahead.

After tightening in each of the prior three months, investment grade (IG) corporate bond spreads widened by 5bps to 86bps at the end of July. IG corporate spreads were 10 bps tighter year-to-date. For July, the BBG IG Corporate Index (the “Index”) gained 1.37 percent on a total return basis and delivered an excess return of negative 37bps over duration-matched Treasuries.

According to Bloomberg, the best-performing corporate sectors in July were Real Estate Investment Trusts, Financials, Natural Gas, and Chemicals. The worst-performing sectors were Oil Field Services, Wirelines, Cable/Satellite, and Refining.

Index-eligible IG bond issuance in July, per Bloomberg, was $101 billion, down about $45 billion from June, which was normal for July as companies are gearing up to report second quarter earnings and coming out of a quiet period. Net issuance, after redemptions, was $31 billion. Demand for bonds remained strong. According to Wells Fargo and EPFR, IG fund inflows were about $25 billion.

As of July 30, according to FactSet, more S&P 500 companies were beating earnings-per-share (EPS) estimates for the second quarter than average and beating EPS estimates by a wider margin than average. The above-average growth rates were due to a combination of higher earnings for 2021 and an easier comparison to weaker earnings in 2020, due to the negative impact of COVID-19 on a number of industries, per FactSet.4

The data supports our view that improving credit fundamentals were a positive for the IG market. Growing earnings should have driven credit metric improvement across most sectors. Accordingly, agency rating downgrade activity had slowed, as the economy had recovered. IG corporate bonds continued to benefit from foreign demand as Europe and Japan yields remained low. On July 22, The Wall Street Journal reported that the European Central Bank signaled that it would support the eurozone economy by keeping interest rates low for longer as a surge in COVID-19 Delta variant infections prompted new social restrictions and weighed on the region’s tourism industry.5 Technical conditions, balancing supply and demand indicators, remained a modest strength in our view.

During July, agency MBS, as represented by the Barclays MBS Index, moderately underperformed like duration Treasuries. Early in the month, rates rallied, renewing fears of fast prepayments. In addition, the market saw more net supply added to what was a record‐breaking year already. Further, increased market chatter about the potential timing for the Fed’s tapering of bond purchases weighed on the sector.

MBS bounced back later in the month as the Fed meeting brought no imminent changes to the central bank’s current buying program. Government National Mortgage Association 30-year issues struggled relative to Federal National Mortgage Association and Federal Home Loan Mortgage Corporation bonds, having earned a year-to-date excess return that is lower by about 100bps, per Bloomberg.

According to Barclays, agency commercial MBS struggled in July, underperforming Treasuries by 30bps on an excess return basis. Non-agency CMBS had a negative excess return of 13bps.

DISCLAIMER: The opinions and views expressed are those of Breckinridge Capital Advisors, Inc. They are current as of the date(s) indicated but are subject to change without notice. Any estimates, targets, and projections are based on Breckinridge research, analysis and assumptions. No assurances can be made that any such estimate, target or projection will be accurate; actual results may differ substantially.
There are risks associated with fixed income investments, including credit risk, interest rate risk, default risk, and prepayment and extension risk. In general, bond prices rise when interest rates fall and vice versa. This effect is usually more pronounced for longer-term securities. Past performance is not a guarantee of future results.
Nothing contained herein should be construed or relied upon as financial, legal or tax advice. All investments involve risks, including the loss of principal. Investors should consult with their financial professional before making any investment decisions.
While Breckinridge believes the assessment of ESG criteria can improve overall credit risk analysis, there is no guarantee that integrating ESG analysis will provide improved risk-adjusted returns over any specific time period.
Some information has been taken directly from unaffiliated third-party sources. Breckinridge believes such information is reliable but does not guarantee its accuracy or completeness.
Any specific securities mentioned are for illustrative and example only. They do not necessarily represent actual investments in any client portfolio.
BLOOMBERG® is a trademark and service mark of Bloomberg Finance L.P. and its affiliates (collectively “Bloomberg”). BARCLAYS® is a trademark and service mark of Barclays Bank Plc (collectively with its affiliates, “Barclays”), used under license. Bloomberg or Bloomberg’s licensors, including Barclays, own all proprietary rights in the Bloomberg Barclays Indices.
Neither Bloomberg nor Barclays approves or endorses this material, or guarantees the accuracy or completeness of any information herein, or makes any warranty, express or implied, as to the results to be obtained therefrom and, to the maximum extent allowed by law, neither shall have any liability or responsibility for injury or damages arising in connection therewith.

July 2021 Market Commentary
In July, the persistency of low rates and strong supply were overriding factors as bond investors looked ahead to the second half of the year.
A powerful conversation between our CIO and CEO of Girls Who Invest
Former CIO Laura Lake and GWI's CEO Janet Cowell, discuss their paths in the industry and why this organization is important.
From Peter Coffin: Navigating the Bond Market
By Peter Coffin
In this short video, hear from Breckinridge President Peter Coffin as he offers some perspective during this time of turmoil.