A volatile January for investments, highlighted by a Federal Reserve (Fed) sounding more intent on raising interest rates, ended on a positive note, as bond and stock prices regained a measure of the losses realized earlier in the month.

Inflation continued to run well above trend with the Personal Consumption Expenditures (PCE) core deflator coming in at 4.9 percent, year-over-year. Treasury yields increased and market expectations for the number of fed funds rate increases in 2022 increased to 5 by year-end.

Through its statements before and after its January meeting, the Federal Open Market Committee appeared ready to start raising the federal funds rate from its zero-lower bound in March. At some point thereafter, the Fed will begin to reduce the size of its balance sheet, which has grown to $9 trillion in an effort to spark economic activity during the pandemic-induced economic restrictions. 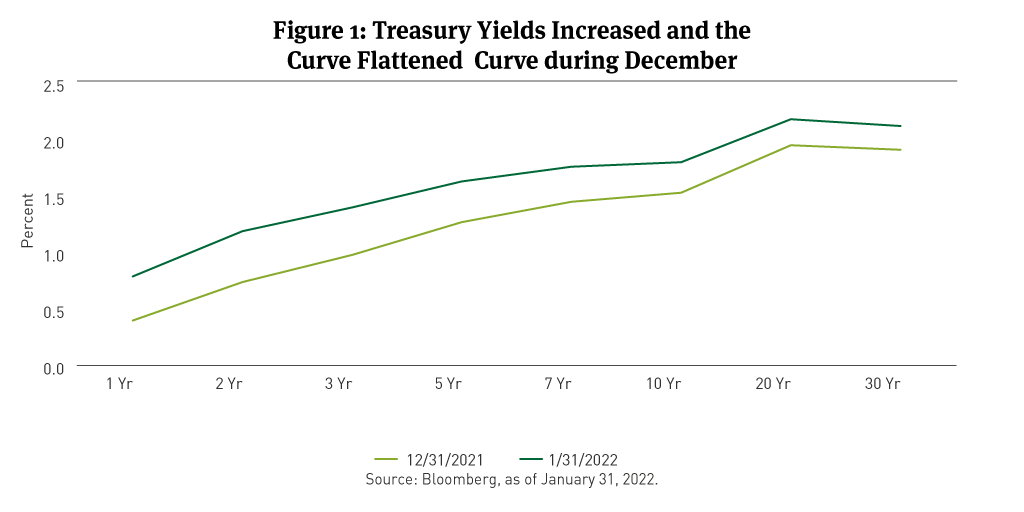 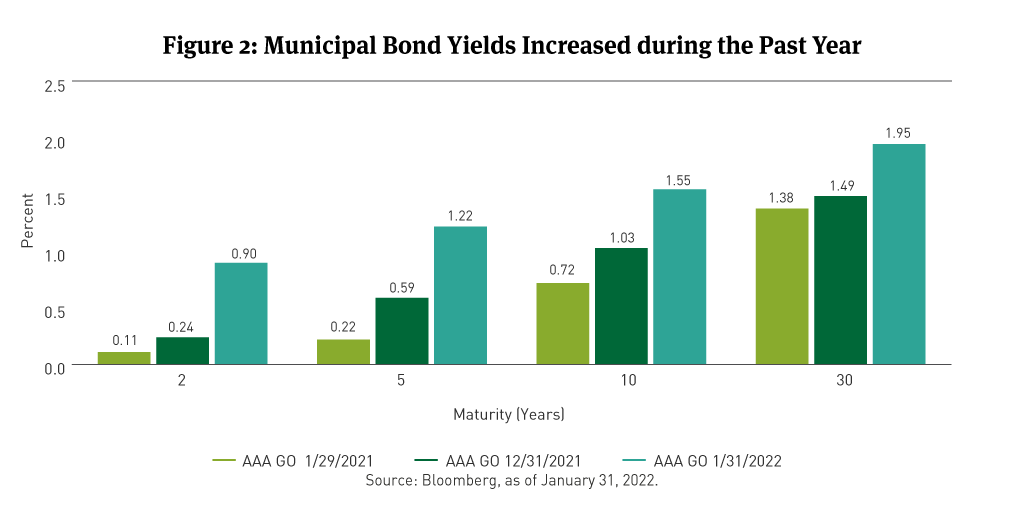 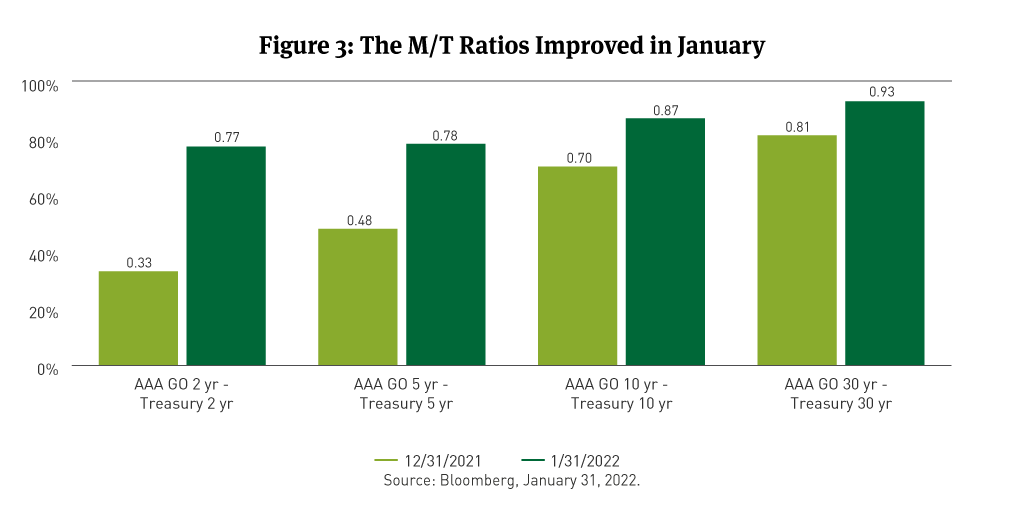 The municipal yield curve finally responded to the flattening that had occurred in the Treasury curve. The 2- to 10-year slope has now fallen from just over 100bps at the end of October 2021 to 66bps at the end of January 2022.

The underperformance of municipals drove ratios sharply higher during the month, rising to 77 percent for the two-year maturity, 87 percent for the 10-year, and 93 percent for the 30-year, flattening the ratio curve. Ratios at these more attractive levels allowed us opportunities to add bonds at more compelling yields from both an absolute and relative-value standpoint.

Municipal bond fund flows were negative, the first monthly outflow since April 2020. Investment Company Institute data show that as of January 26, 2022, fund outflows had totaled about $1 billion during the month.

Bloomberg data showed that dispersion in performance among bonds based on credit-quality rating was limited with higher-quality issues slightly outperforming the lowest IG-quality bonds. IG corporate bonds with shorter maturities turned in the best performance on a total return basis.

Index-eligible IG bond issuance in January, per Bloomberg, was nearly $181 billion, a decrease from about $62 billion in December. Net issuance, after redemptions, was $90 billion, following a negative net total in December. According to EPFR, IG bond funds reported $8 billion of outflows in January.

Quick Takes: Breckinridge Assesses the 2020 Election
By Matthew Buscone , Jeffrey Glenn , Nicholas Elfner , Adam Stern
The 2020 elections clarify some important issues for investors and leave others unsettled for now. Our investment team is tracking the implications closely and offers insights and expectations in our comprehensive roundtable discussion.
Financial Glossary
A glossary of common terms in the bond markets and there definitions.
Duration 101
By Jeremy Jenkins
Duration is one of the most important concepts for bondholders to understand as they review the performance of their fixed income investments.