Financial markets in January continued the relatively quiet conditions of December. Amid violent upheaval surrounding the arrival of a new administration in Washington, D.C., investors seemed to take a wait-and-see attitude.

The stock market, as measured by the S&P 500 Index, closed the month with its worst weekly performance since October, settling 1 percent lower for the month. Treasury yields moved higher, most substantially at the long end of the curve. Compared with one year ago, Treasury yields are about 145 basis points (bps) lower at 1-year spot and 46bps lower in the 30-years range. 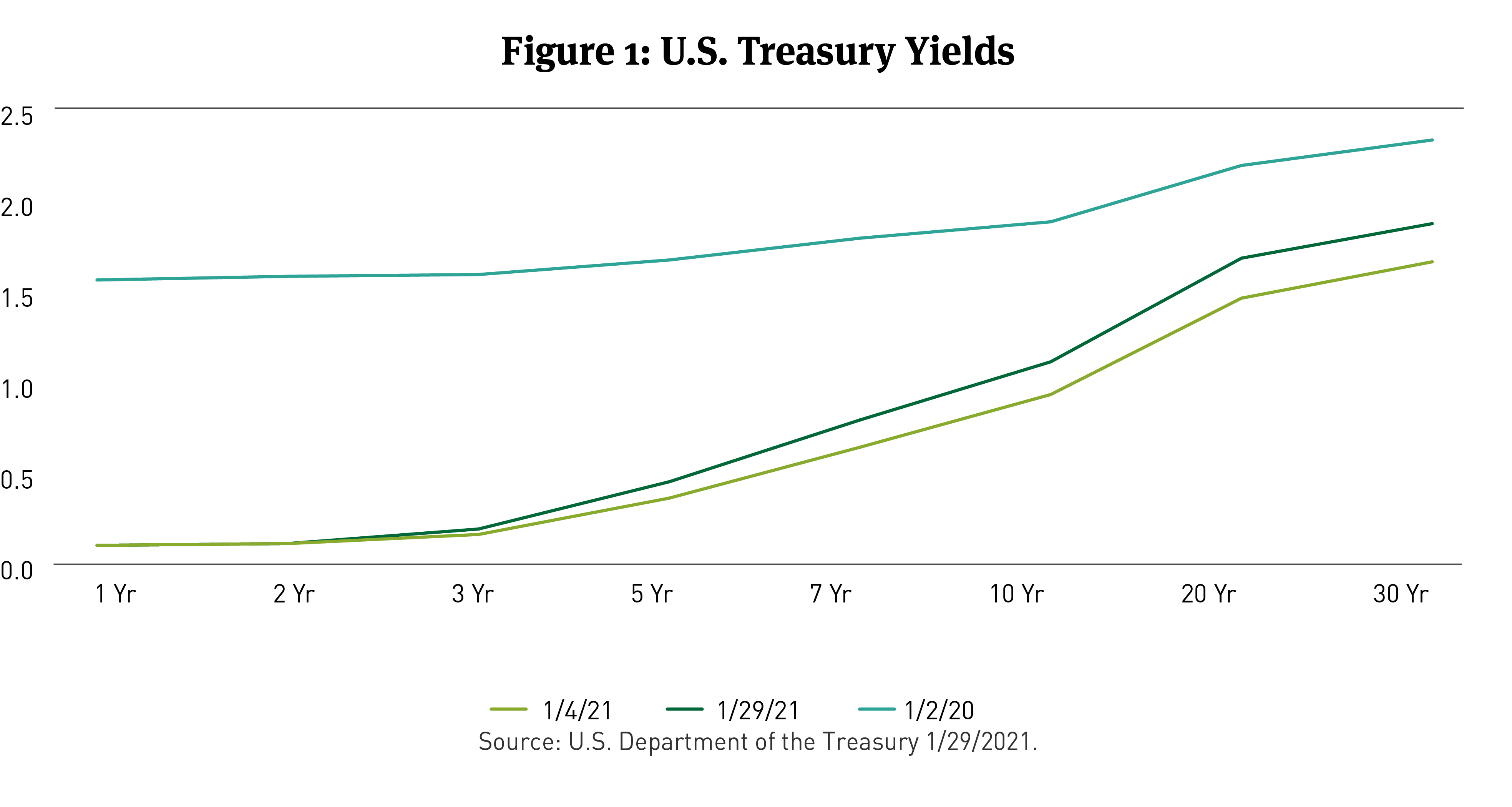 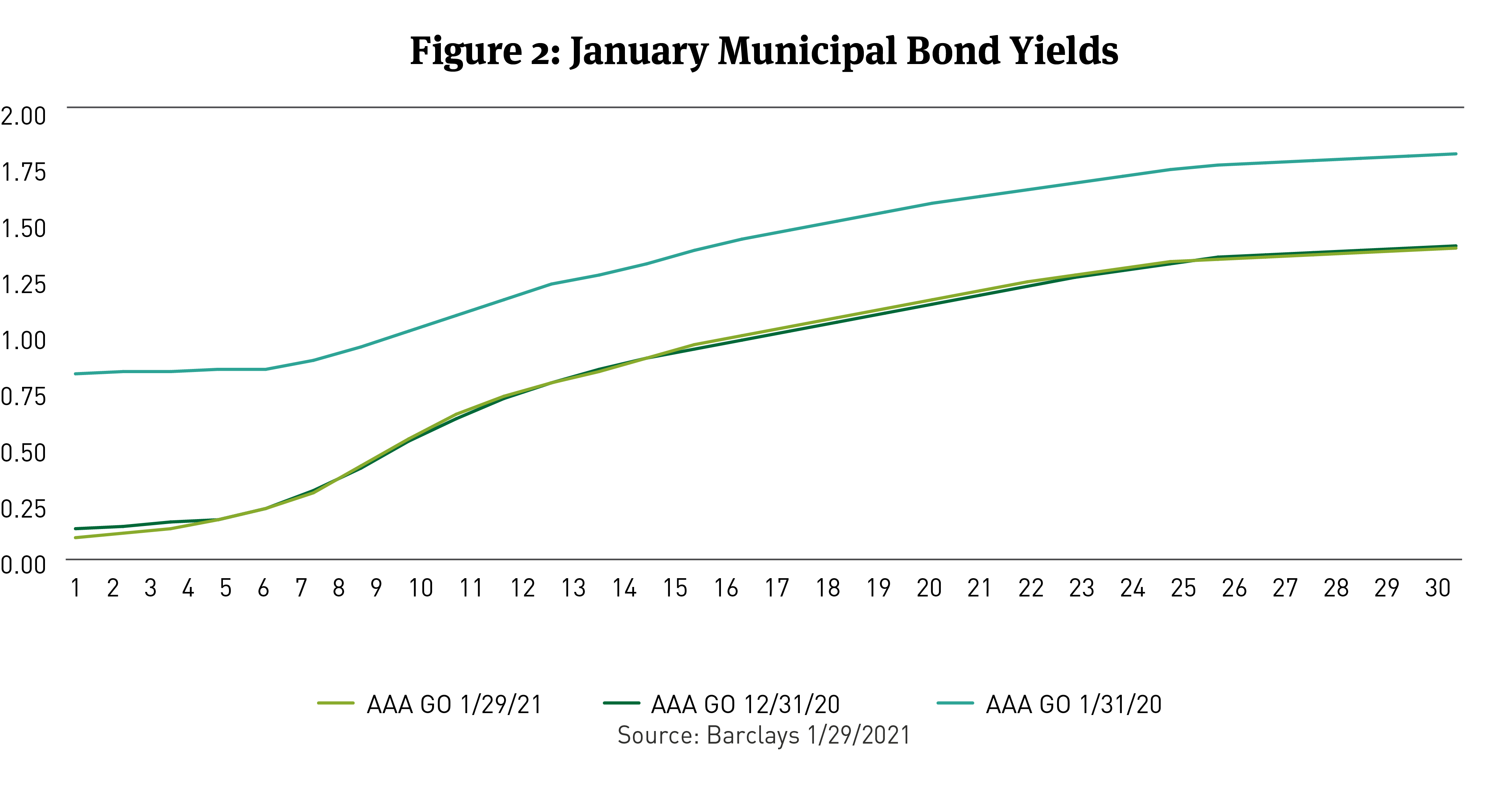 Corporate bonds also exhibited little change during the month. Yields were 1bp wider. Corporate earnings season began and, of the first 184 companies in the S&P 500 to report, 84 percent topped analyst expectations, far more than usual, according to Refinitiv data.

January’s new issue supply totaled roughly $24 billion, according to The Bond Buyer, and marked its lowest level since 2018. Supply dropped more than $10 billion compared to the prior month and fell an estimated $8 billion versus January 2020. Taxable municipal bonds continued to be a strong presence, representing about 28 percent of total volume.

The slope of the municipal yield curve was broadly unchanged during the month. The 2s and 5s, 2s10s and 5s10s curves steepened by 3bps, 4, bps and 1bp, respectively.

With Treasury yields increasing and municipal yields treading water, Municipal/Treasury (M/T) ratios were lower than one month and one year ago. Notably, the 5-year ratio hovered near 50 percent by month end. 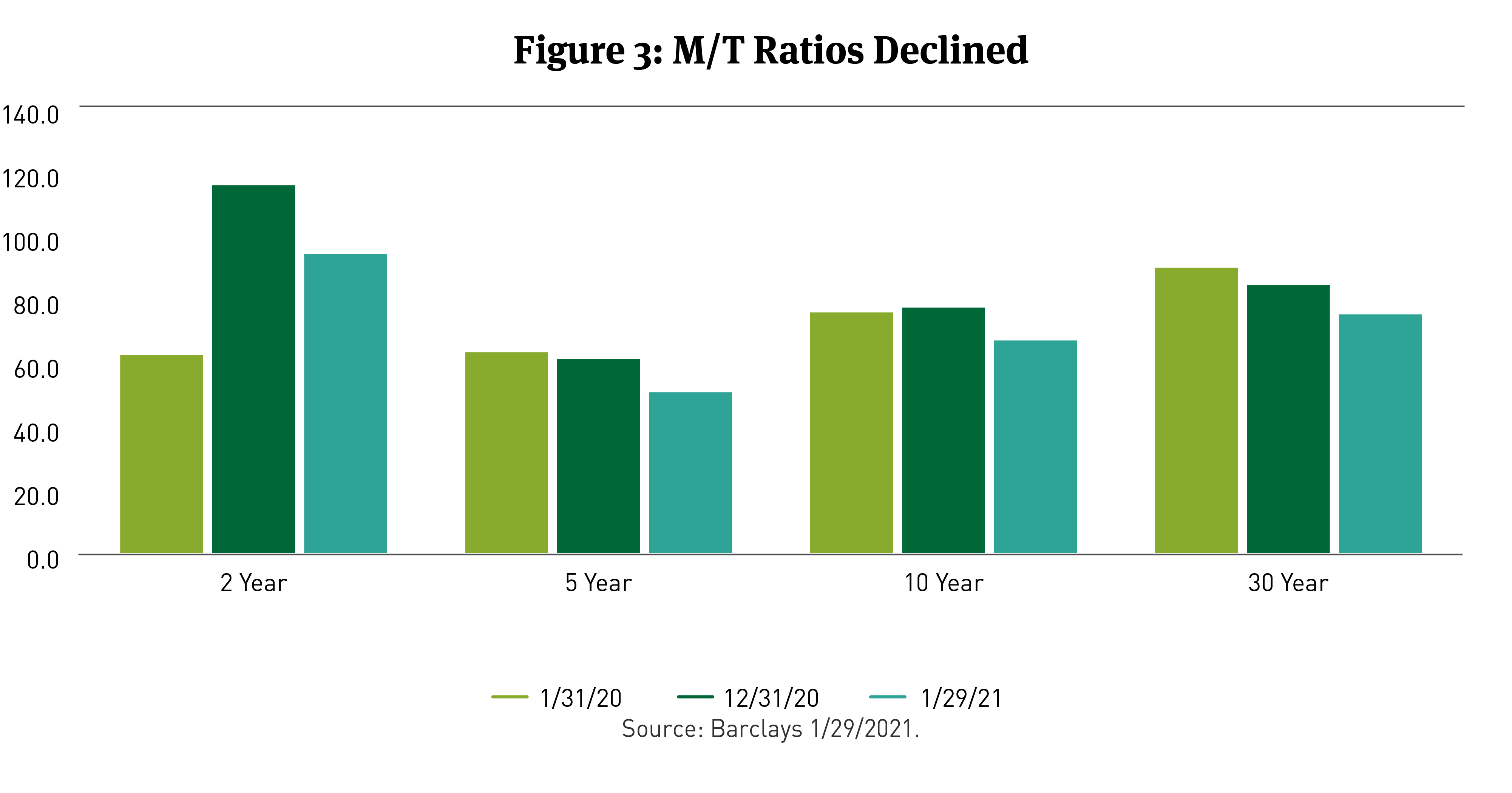 Our outlook remains for a recovery in the economy broadly and municipal sectors specifically as distribution of vaccines accelerates, fiscal relief is finalized and delivered, and accommodative monetary policies are extended. Timing may defer broad economic improvements to the second half of the year. In the near-term, supportive technical conditions are likely to continue.

The BBG U.S. Corporate Investment Grade Bond Index fell 1.28 percent for the month. According to Barclays, the best-performing corporate sectors for the month were Airlines, Building Materials, Healthcare and Refining. The worst-performing sectors were Integrated Energy, Transportation Services, Wireless, Cable/Satellite and Health Insurance.

Index-eligible IG corporate supply was more than $117 billion over the month, per Barclays. IG fund inflows were $30 billion, per EPFR Global. After a record year in 2020, we expect IG supply to decline in 2021, but for the month of January, supply and demand dynamics contributed to a competitive market for high-grade corporate bonds, keeping yield spreads narrow and prices high.

Our view is that as the economy recovers, corporate profits rebound and markets move on from the extraordinary intervention of the Fed last year, fundamentals will return to prominence as a valuation determinant.

With 17bps of excess returns for the month, ABS underperformed other securitized sectors. Auto loans, with a monthly excess return of 19bps, outperformed credit cards at 13bps, according to the BBG Asset-backed Securities Index.

February 2022 Market Commentary
Uncertainty and volatility ratcheted higher in February on expectations for a federal funds rate increase and Russia’s invasion of Ukraine.
Why Bonds Matter: Lessons from Behavioral Finance
By Peter Coffin
Breckinridge President Peter Coffin shares his views on bonds in this new era of volatility.
Reflecting on the Importance of Our Independence
By Peter Coffin
Independence is a key part of the fabric of Breckinridge.