Bond market news in February was dominated by increasing rates and reflation. Investors appeared to be projecting at least a period of increasing rates and economic reflation resulting from pending additional fiscal stimulus from Congress, increasing consumer prices that would accompany economic growth, and improving employment, among other influences. In comments released during the month, the Fed indicated it is willing to accommodate the trends as the economy reemerges from a pandemic-induced period of restraint as it remains focused on the level of unemployment. Stocks, as measured by the S&P 500 Index, added 2.7 percent. 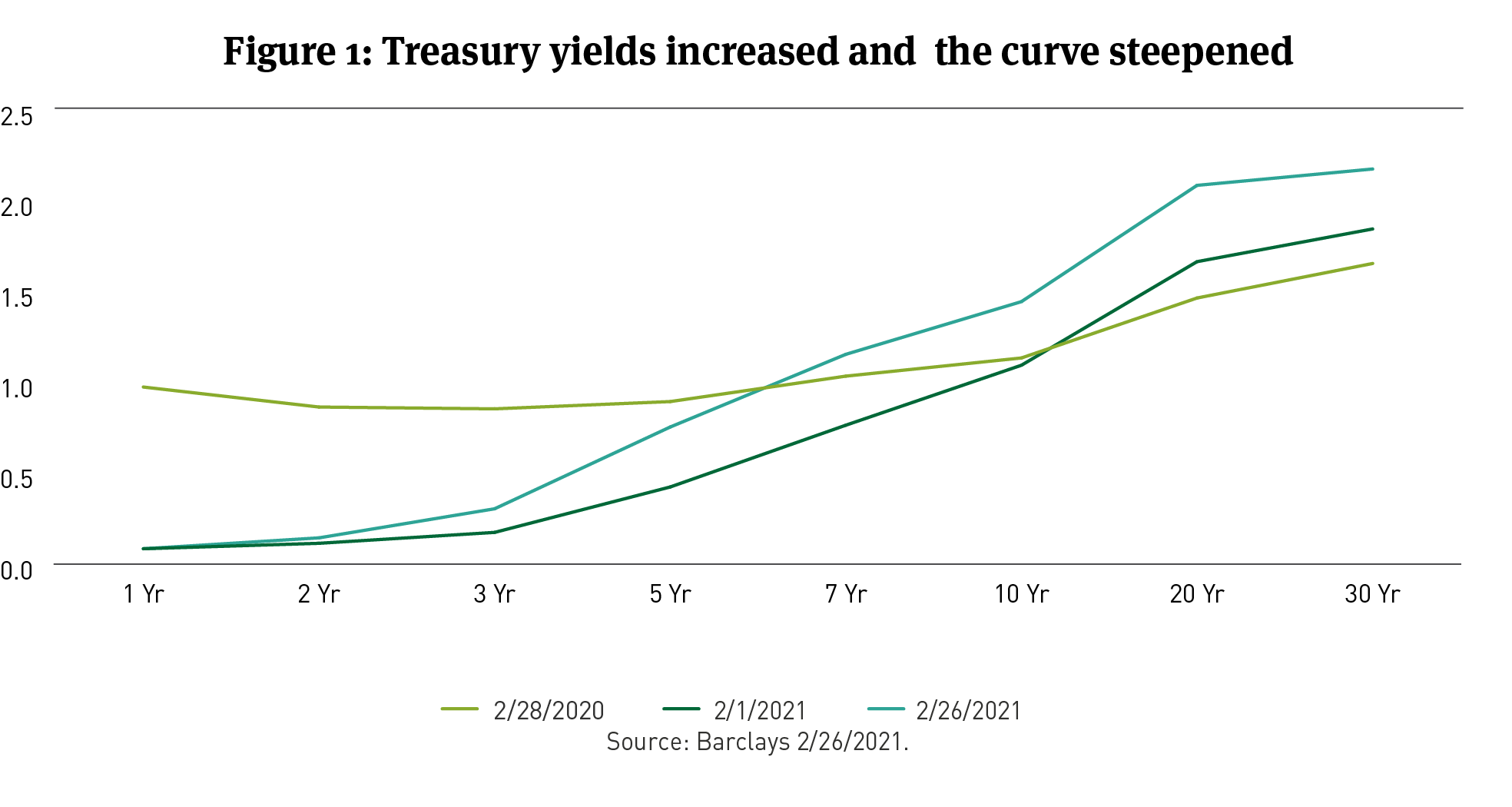 Municipal bond yields resisted the move higher during the first half of the month and outperformed Treasuries. As the Treasury sell-off gained momentum, municipal bonds followed as the month ended. The municipal yield curve steepened, particularly in the intermediate 2- to 10-year segment (see Figure 2). 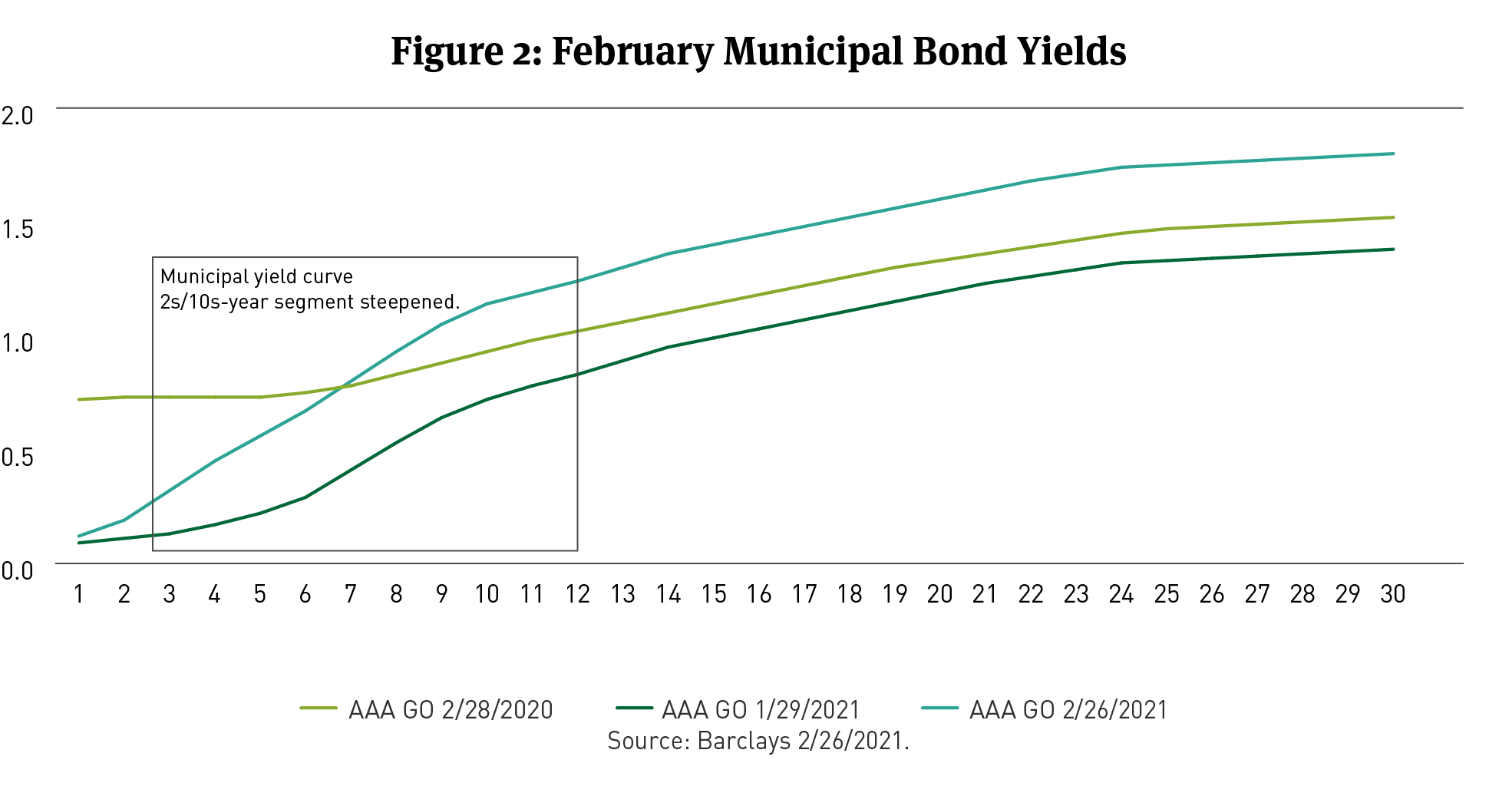 Higher yields and a steeper curve were the stories in the municipal bond market during February.

The municipal yield curve steepened in several key segments for short and intermediate-term investors. The 2s5s, 2s10s and 5s10s curves steepened to 37bps, 95bps and 58bps, respectively. The 10s/30s curve was unchanged at 66 bps.

After dipping to new lows early in the month, M/T ratios were higher compared with January. M/T ratios at month end approached levels in the intermediate term not seen in months (see Figure 3). Notably, the 5- and 10-year ratios ended the month at more than 70 percent after closing January at 50 percent and 66 percent, respectively. 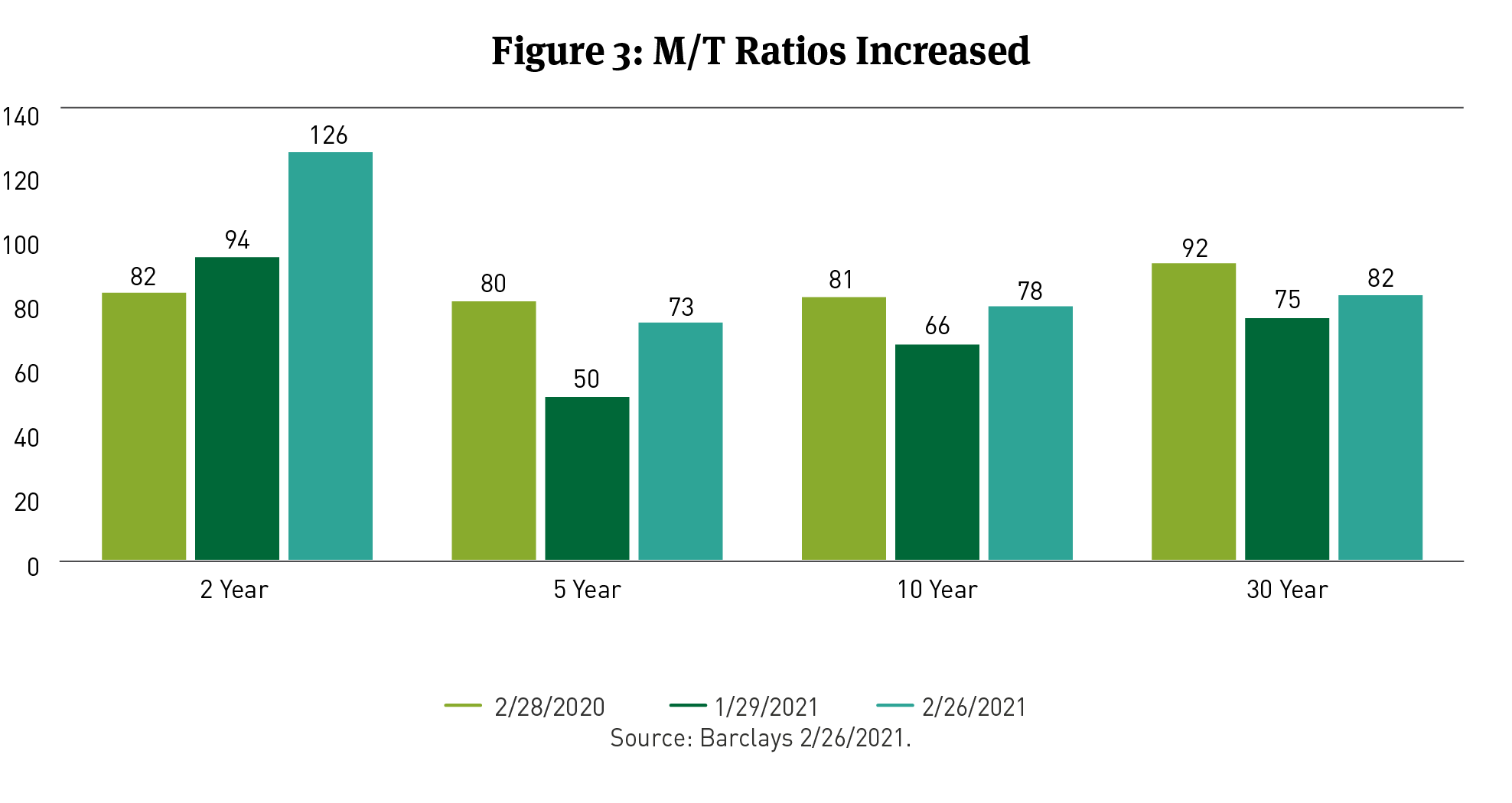 According to The Bond Buyer, February new issue supply totaled almost $31 billion. The total is somewhat above the 10-year average of approximately $27 billion for February and about $4 billion more than was issued in January, but is off nearly 28 percent from February 2020. Taxable municipal bonds continued to be a strong presence, representing about 35 percent of total volume in February. The supply and demand technical supported municipal bonds during the first two weeks of the month, while demand and fund inflows subsided during the last two weeks.

While the month’s yield changes were dramatic, we often see markets experience significant short-term changes in response to near-term influences and then readjust with the passage of time. We believe that the volatility of late February represents just such a circumstance. Thanks to improving municipal bond credit fundamentals and expectations for limited tax-exempt supply, our outlook remains for a recovery through year end in the economy broadly, and municipal sectors specifically, as vaccinations continue to increase, fiscal relief is finalized and delivered, and accommodative monetary policies remain in place.

Index-eligible IG corporate bond spreads narrowed by 7bps in February to 90bps, which is 3bps tighter than where spreads bottomed in December 2019 prior to the pandemic. IG yields rose 19 bps to 2.05 percent as the Treasury 2s/10s curve steepened 32bps, Wells Fargo reported.

Index-eligible, fixed-rate gross IG supply was $139 billion over the month, per Barclays, representing a 19 percent increase over January. IG fund inflows were about $21 billion in February with intermediate-duration funds attracting most of the money while long-end funds saw nearly $5 billion of outflows, per EPFR Global. While IG fund flows have slowed, foreign and insurance demand are additional sources of demand.

Our view is that as the economy recovers, corporate revenues and earnings will rebound sharply, which will drive improved credit metrics across most sectors. Issuers are expected to take a balanced approach in deploying excess cash raised in the past year. We believe that valuations are tight but not unreasonable in a global context and relative to IG bond alternatives.

Mortgage-Backed Security (MBS) prepayment speeds slowed early in the month, which has given hope to investors looking for signs that the refinancing wave is cresting with the increase in rates broadly. Spreads grinded tighter in response, approaching levels last seen during QE2 in 2012. When rates increase, mortgage durations extend and some investors look to shed duration by selling Treasuries, which can put additional upward pressure on rates – a phenomenon known as convexity hedging – and one of the major underlying trends we saw in February.

ABS delivered 3bps of excess returns, led by a strong performance by bonds backed by credit card debt at 8bps. Auto loans had monthly excess return of negative 1bp, according to the BBG Asset-backed Securities Index.

U.S. Catholic Bishops Reviewing Investing Guidelines, Asset Managers Paying Attention
News that the USCCB is reviewing its sustainable investing guidelines is prompting speculation that revisions may include additional context for ESG investing.
Breckinridge Market Monitor – February 2022
Increasing yields at the front end of the municipal curve during the first six weeks of 2022 may present a more attractive entry point for fixed income investors who were hesitant to invest during 2021.
Financial Glossary
A glossary of common terms in the bond markets and there definitions.