In February, risk assets continued their solid performance partly due to the announcement that Congress had come to a budget agreement to avoid another government shutdown. In addition, Fed minutes assured investors that the Fed would be patient and data dependent in its path toward rate normalization.

In the U.S., 4Q18 corporate profits were mostly healthy and labor market data was once again above consensus, with payrolls increasing by 304,000 in January. Unemployment ticked up to 4 percent, but we note that the participation rate also increased and the government shutdown likely had one-time negative effects. GDP remains above-trend, rising 2.6 percent in 4Q18 according to the “initial” estimate.

That said, the overall macro picture remains mixed, as many of the same headwinds of recent months continue to permeate U.S. markets. First, slowing growth in China remains an uncertainty, even as there has been progress on U.S.-China trade negotiations and the Chinese government has shown willingness to stimulate. In addition, moderating European growth and Brexit are still raising questions. Wage data remains stubbornly lackluster; in January, average hourly earnings were about flat. Retail sales for December unexpectedly fell 1.2 percent – the largest monthly drop since 2009.2 The mix of positives and negatives in today’s global macro picture increase uncertainty about the Fed’s path.

In February, Fed Chair Jerome Powell reiterated the case for a patient interest-rate policy given “muted” inflation pressures, further room to run in the labor market and other “crosscurrents.” Powell also cited slowing global growth as a risk to the outlook, especially given risks in China and Europe. The market now expects zero hikes in 2019 and places a 10 percent probability on a hike by early 2020. This compares with January, when markets priced in a roughly 20 percent chance of a 25 basis points (bps) rate cut by the end of 2019. U.S. Treasury bonds have risen only modestly year-to-date. 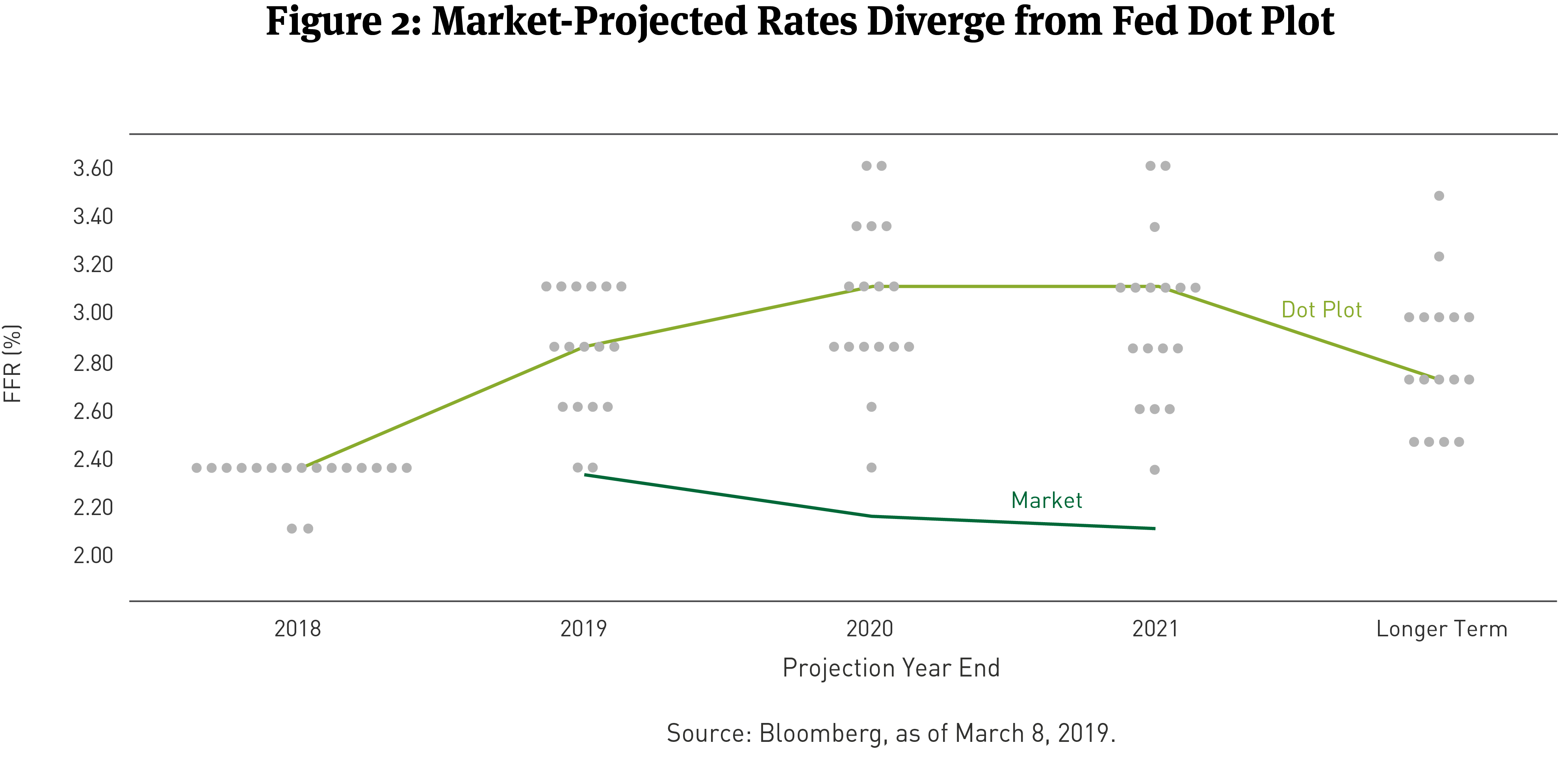 However, we continue to see various trends that could place upward pressure on rates, as well. In particular, we are closely monitoring inflation (Figure 2). Powell’s recent comments increase the possibility that the Fed will be OK with “overshooting” its 2 percent inflation target, as it is aiming for an “average inflation targeting framework” rather than seeing inflation fluctuate with economic performance.

In February, municipal yields moved lower across the curve. Yields fell most in maturities five years and lower, driven by steady demand for shorter maturities. The 30-year muni bond yield also fell;3 however, the long end continues to take the brunt of lower demand from institutional buyers following corporate tax cuts that made the municipal tax exemption less valuable. The 2s30s muni curve has steepened 16bps year-to-date to nearly a 12-month high.4

Total return was positive across maturities, with the highest return in long bonds (maturities 17 years and longer). Lower-quality bonds outperformed higher-quality both month-to-date and year-to-date.5

The strong performance in municipals was due to continued supportive technicals, with strong seasonal demand augmented by unrelenting retail flows. Municipal bond issuance was $23.2 billion for the month, up 30 percent from February 2018 but down modestly from $24.6 billion in January, per the Bond Buyer. For the period ending February 27, year-to-date inflows had reached $12.4 billion – the best start to a year since the data series began in 1992, per Lipper. Year-to-date inflows in both high yield and intermediate bonds hit historic highs, per Lipper.

Municipal credit fundamentals remained solid, though tax receipts for the most recent quarter were sluggish in high-tax states (such as Connecticut, New York and New Jersey). However, the implementation of tax reform in 2018 could be creating some timing issues that skew the dates revenues are received.

Notably, Illinois Gov. J.B. Pritzker proposed his FY 2020 budget in February. While the plan detailed various revenue sources for the future, it did not offer meaningful solutions to address the state’s growing unfunded pension liability. Pritzker’s proposal included a $2 billion pension obligation bond issuance, lower annual retirement contributions resulting from an extension of the state’s pension repayment period and exploration of the monetization of state-owned assets (see Asset Monetization in the Muni Market: It’s More Likely Than You Think). The governor also called for amending the state constitution to allow implementation of a graduated income tax structure. If the amendment is passed, a portion of the potential cash infusion would be dedicated to paying down pension debt. While the state’s unpaid bill backlog remains in excess of $8 billion, we note that the risk of budget gridlock is substantially lower now that the Democrats control the governorship in addition to both state legislative bodies.

The U.S. Corporate Bond Index had another strong month in February, turning in excess return of 59bps.7 The option-adjusted spread fell to 121bps, versus 128bps at the end of January. Spreads have now undone nearly 80 percent of the spread widening that occurred in November and December. However, on a year-over-year basis, the OAS is still 25bps wider.

In February, the best-performing sectors were Refining, Gaming, Finance Companies and Building Materials. Automotive was also one of the stronger sectors after weakness partly related to tariff concerns (Figure 3). The worst performers were Pharmaceuticals, Health Insurance, Supranationals, Consumer Products and Tobacco. In terms of credit quality, crossover names fared the best, while AA-rated companies fared the worst, per Barclays. Most spread volatility that did occur was based on idiosyncratic events, such as weak earnings announcements from Kraft Heinz Company, AIG and CVS Health. 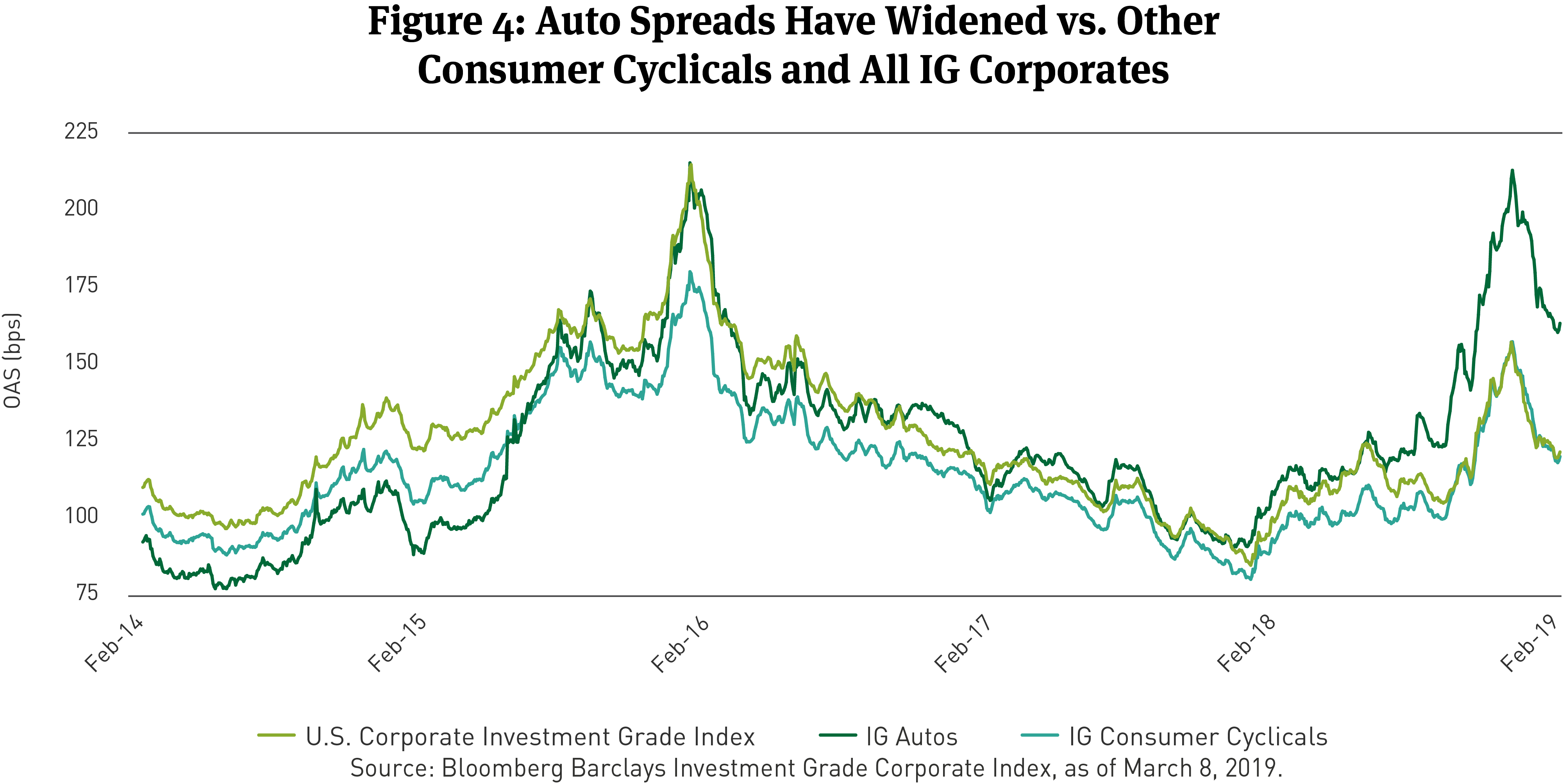 Spreads benefited from a dovish Fed and the abating of some other uncertainties, such as the government shutdown and trade/tariffs. Solid corporate profits, particularly U.S. Banks, also contributed to a constructive backdrop for corporates. Deleveraging through either paying down debt with free cash flow, divesting assets and/or ceasing share buybacks is becoming a more-common management focus and benefited larger issuers’ bonds like A-B InBev and GE in February.

Corporate issuance was met with robust demand in February, as illustrated by lower new issue concessions. The average new issue concession decreased to 0.8bps versus 5.4bps in January, per Bank of America Merrill Lynch. Fund flows were strong enough to absorb the steady supply; inflows were $15.6 billion, bringing net year-to-date inflows to $35.3 billion.8 This comes in the face of TIC data showing that foreign investors net sold $13 billion of corporates (excluding asset-backed securities) in December – the most since June 2012. However, foreign investors sold a greater amount of stocks and Treasury bonds over the same period.

In a notable downgrade, Moody's Investors Service downgraded Vale S.A., a Brazil-based miner, to Ba1 (NEG) from Baa3 (STA) just prior to the dam collapse in Brazil. The downgrade reflects salient environmental, social and governance (ESG) risks surrounding corporate governance and environmental management that will negatively impact Vale’s profitability. Fitch downgraded the company from BBB+ (STA) to BBB- (*-) and S&P Global Ratings currently rates the company BBB- (*-). Additionally, Vale CEO Fabio Schvartsman has “temporarily resigned” from his position at the request of Brazilian prosecutors. It is unclear when or if he will return as CEO.

In February, MBS and ABS continued to have solid performance.

MBS had excess returns of 6bps in February and returns were 39bps year-to-date, per Barclays. The seasonal slowness in February has kept net supply at bay, and has helped drive spread tightening so far this year. Nominal spreads versus the 5- and 10-year Treasury widened to about 95bps in November 2018, after trading in a 75-85bps range for most of the year with the overall market rout. Since then, spreads have retraced and are now trading at roughly 85bps.

MBS fundamentals have taken on increased focus, specifically rising weighted-average coupons (WACs) given that the Fed’s unwind removes a major buyer from the space. This is expected to introduce greater negative convexity into the market that will need to be absorbed by price- sensitive buyers. The sector continues to search for the marginal buyer; bank demand has come back on the margin this year, and money managers are expected to fill the remaining void. Given the interest rate rally off the highs in 4Q18, all eyes will be on March’s prepay report as 4.5 percent coupons and above are in the refinance crosshairs, leading to some uncertainty with prepayment risk. That said, approximately 90 percent of the coupons on the conventional MBS outstanding remain not refinanceable, assuming a 50bps refinancing hurdle (4.85 true refinancing rate) despite the rally, per Breckinridge MBS data.9

Nominal spreads versus benchmark swaps have tightened considerably to start the year. Front-end swap spreads have also tightened, compressing spread pickup versus Treasuries to recent tights. We continue to favor prime, short defensive ABS sectors and, despite the tightening, we find value in the ABS sector.

A major trend continues to be deterioration in credit card fundamentals. As the consumer balance sheet normalizes and issuers seek to diversify their business mix away from the low-risk convenience users into revolving balances customers, fundamentals have weakened. That said, our focus is on the most prime sectors, where bonds are still strong fundamentally and well- protected by structure.

[1] The weighted average of the coupon interest rates for the underlying mortgages serving as collateral on MBS.

Investment grade corporates continued their strong performance in February. Find out what trends are driving IG fixed income in our latest commentary.

Fixed-income market participants often quote the term “yield,” but the word’s context could be misunderstood because various types of yield exist and each is calculated differently.