Key Drivers for the Quarter

COVID-19 shutdowns pushed economic activity and corporate profit growth deep into the red in the second quarter. For Q2, U.S. real GDP decreased at an annualized rate of 31.4 percent, according to a third estimate released on September 30 by the Bureau of Economic Analysis. The Federal Reserve Bank of St. Louis GDP Now reading for Q3 GDP shows an annual rate of increase of nearly 20 percent, as of September 25.

Our view remains that the boost to economic growth from fiscal and monetary stimulus earlier in 2020 is likely to sustain the market’s recovery into Q4. A delay in additional stimulus, high unemployment and the continued economic impact of the virus will potentially weigh on economic growth next year.

Corporate earnings in Q2 for S&P 500 companies beat expectations. FactSet reported that 84 percent of companies in the S&P 500 reported actual earnings per share (EPS) above the mean estimate That is the good news.

The less exciting news is that expectations were very low and reported earnings declined by 32 percent in Q2 year-over-year. Profit stress was more prevalent in Energy, Industrials and Materials while Healthcare, Technology and Utilities sector held up relatively well. Earnings are also expected to decline in Q3 and Q4 year-over-year but at a decelerating rate. Investors will be discerning about the relative strength of results, the increase in debt and future credit quality downgrades.

At $1.67 trillion through the end of the third quarter, IG corporate supply is already at a record. That said, the torrid pace of issuance did slow in 3Q to $389 billion (+10 percent year-over-year). Low IG fixed income yields are driving a global search for yield, benefiting U.S. IG corporate bonds. IG issuers are retiring higher-coupon bonds and the average interest rate on new debt is at a record low. Short-term IG issuance in the three-year and lower segment of the credit yield curve is up just 10 percent year-over-year, while 5- to 7-year and 7- to 10-year issuance is up 108 percent and 67 percent, respectively. The large year-to-date increase in low-coupon supply further out the curve has extended duration of the IG corporate index. 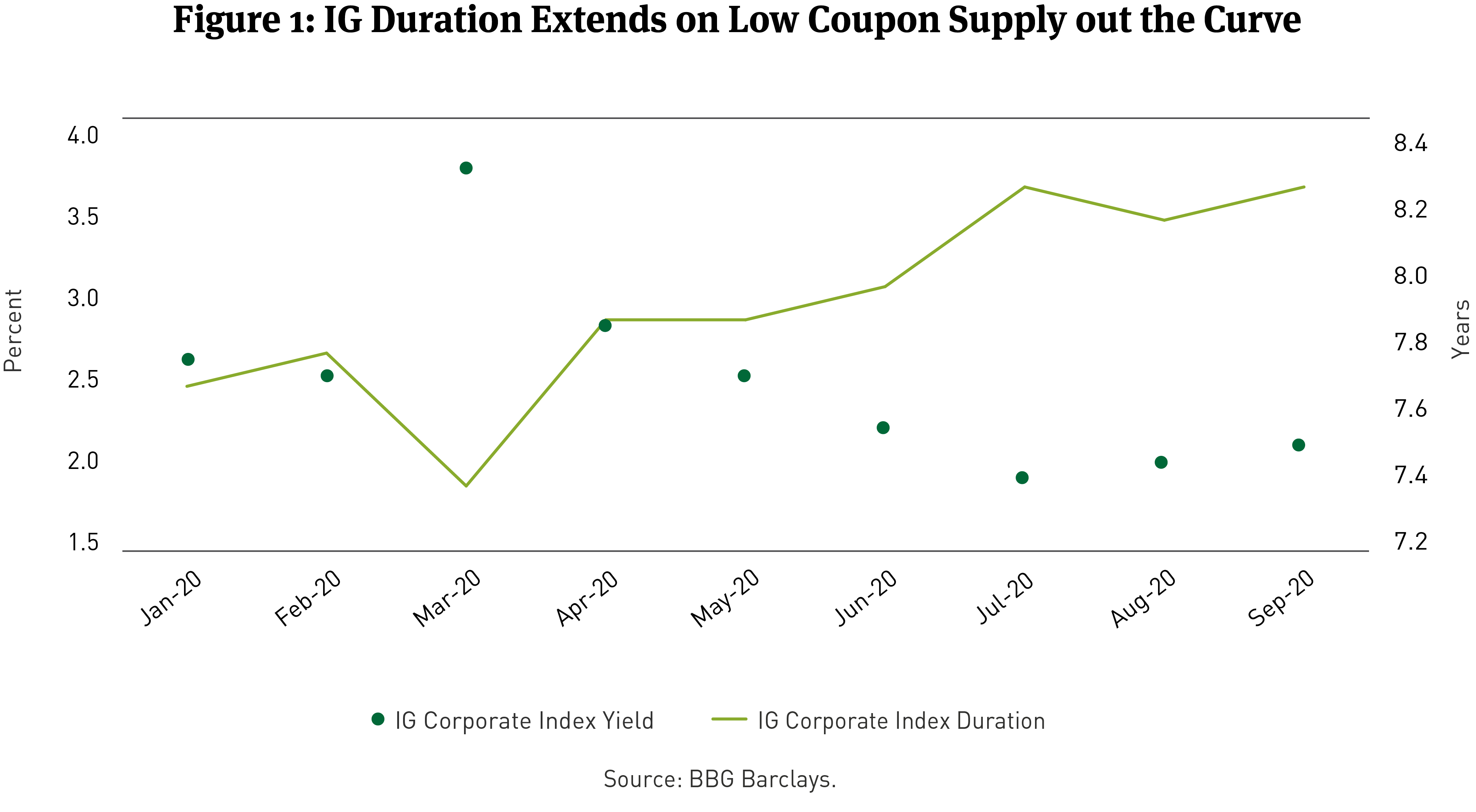 The Fed continued to purchase IG corporate bonds with maturities less than five years and corporate bond exchange traded funds during the quarter. The level of Fed purchases tapered from volumes seen at the launch of the Primary Market Corporate Credit Facility in May. Fed bond buying contributed to a steepening of the yield curve. 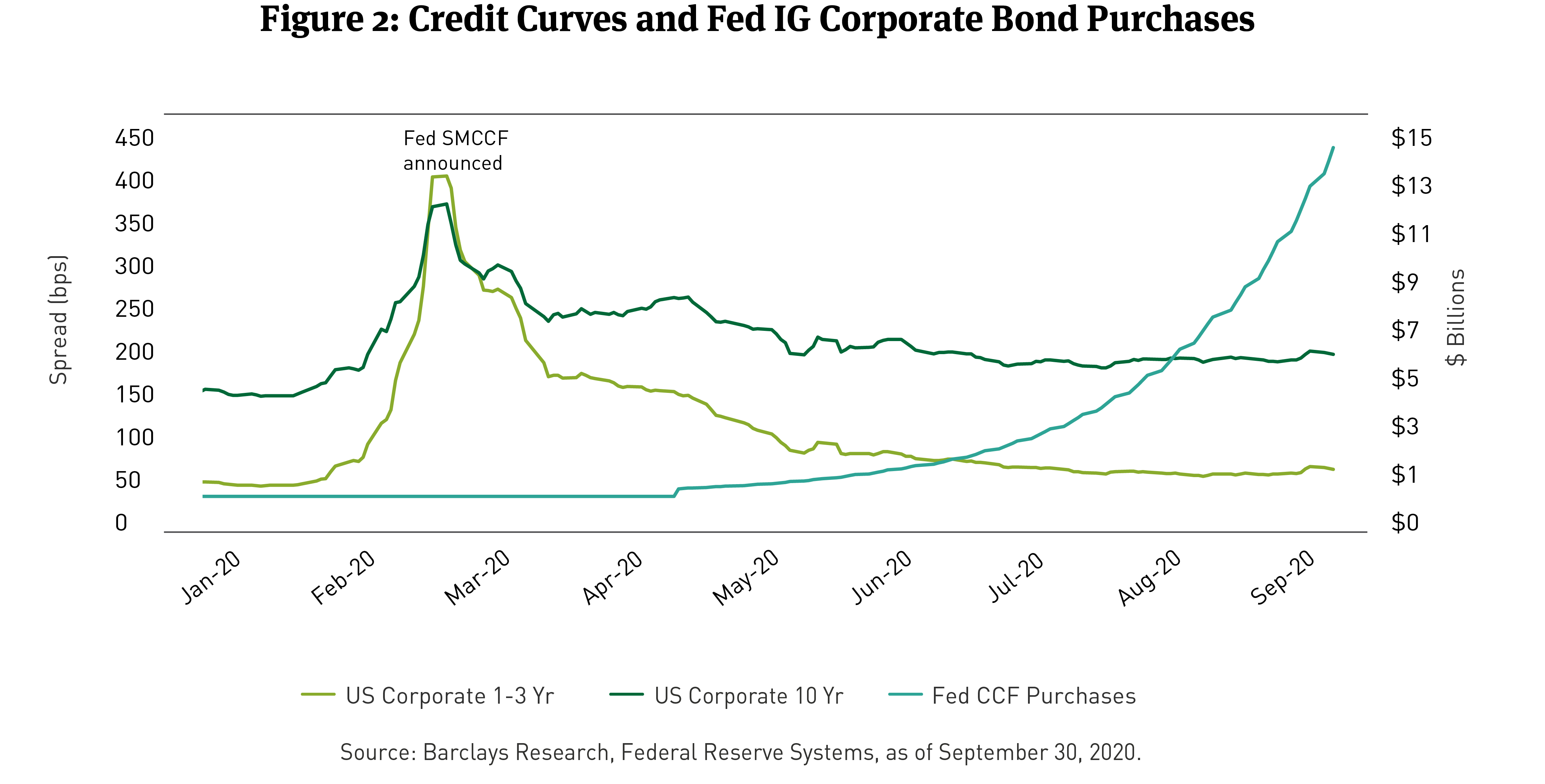 During Q2 and Q3, short-term corporate bond spreads—3-years and shorter—compressed more than 332bps. As short-term spreads compressed, opportunities to capture relative value emerged at longer maturities on the curve.

Economic activity and corporate profit growth fell in the second quarter. Corporate debt leverage increased during the third quarter, as would be expected during a period of heightened new issuance and declining profits.

Record debt raised at low yields in the first half of 2020 will need to be repaid over time. As expected, rating agencies responded to the precipitous drop in earnings and increase in leverage by downgrading credit ratings. 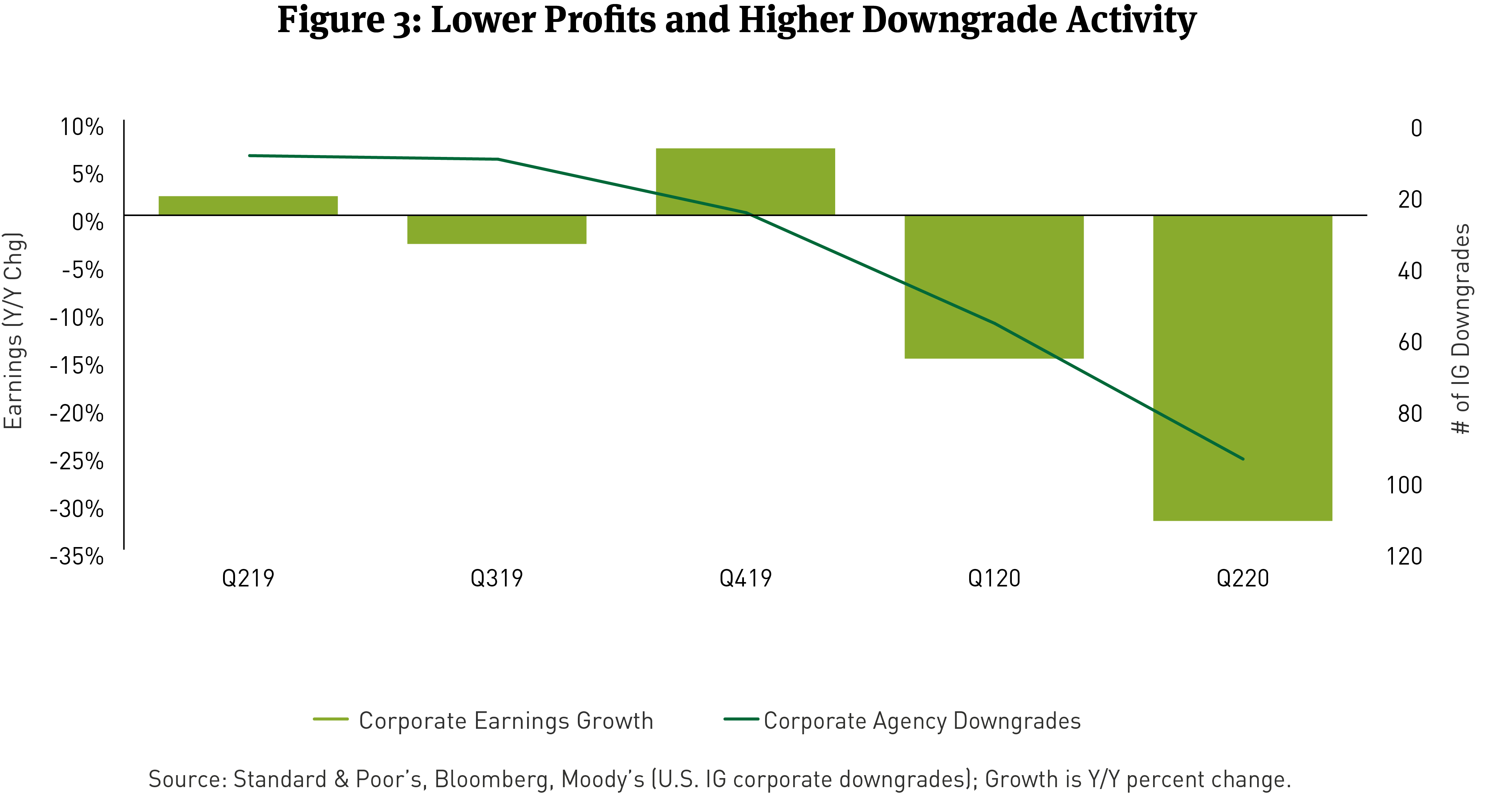 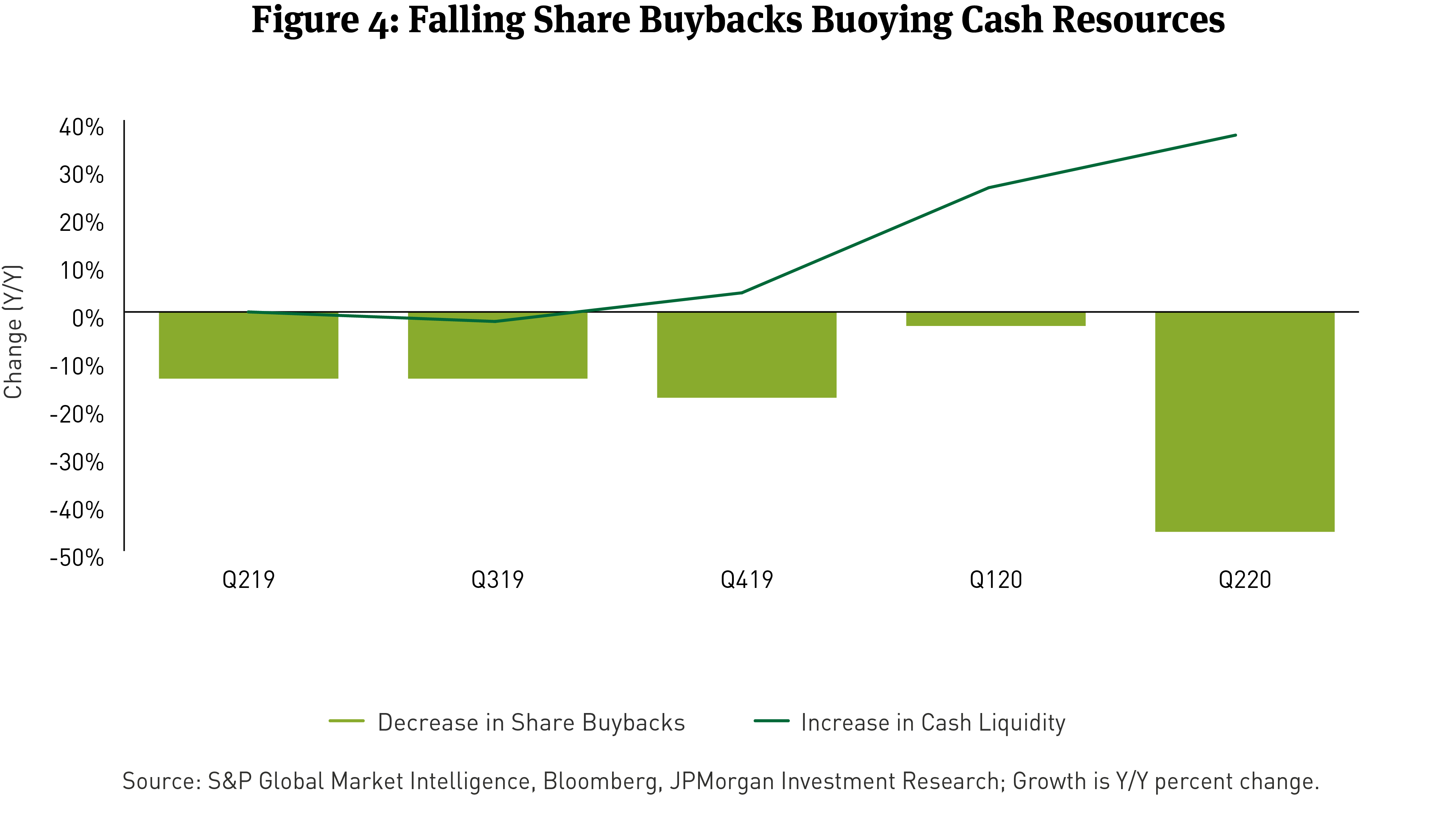 During the third quarter, our industry engagements highlighted a sustained commitment to climate-risk management among some of the largest U.S. banks. Climate-risk management includes stress testing oil and gas loan exposures, considering the impact of a global price on carbon, carbon foot-printing loan portfolios and conducting climate scenario analysis. Learn more about these engagements here.

In our Q320 Corporate Trends Dashboard, we capture our views of key drivers of IG corporate credit. Strong monetary policy and fiscal stimulus is offset by a weak economy and high financial leverage. 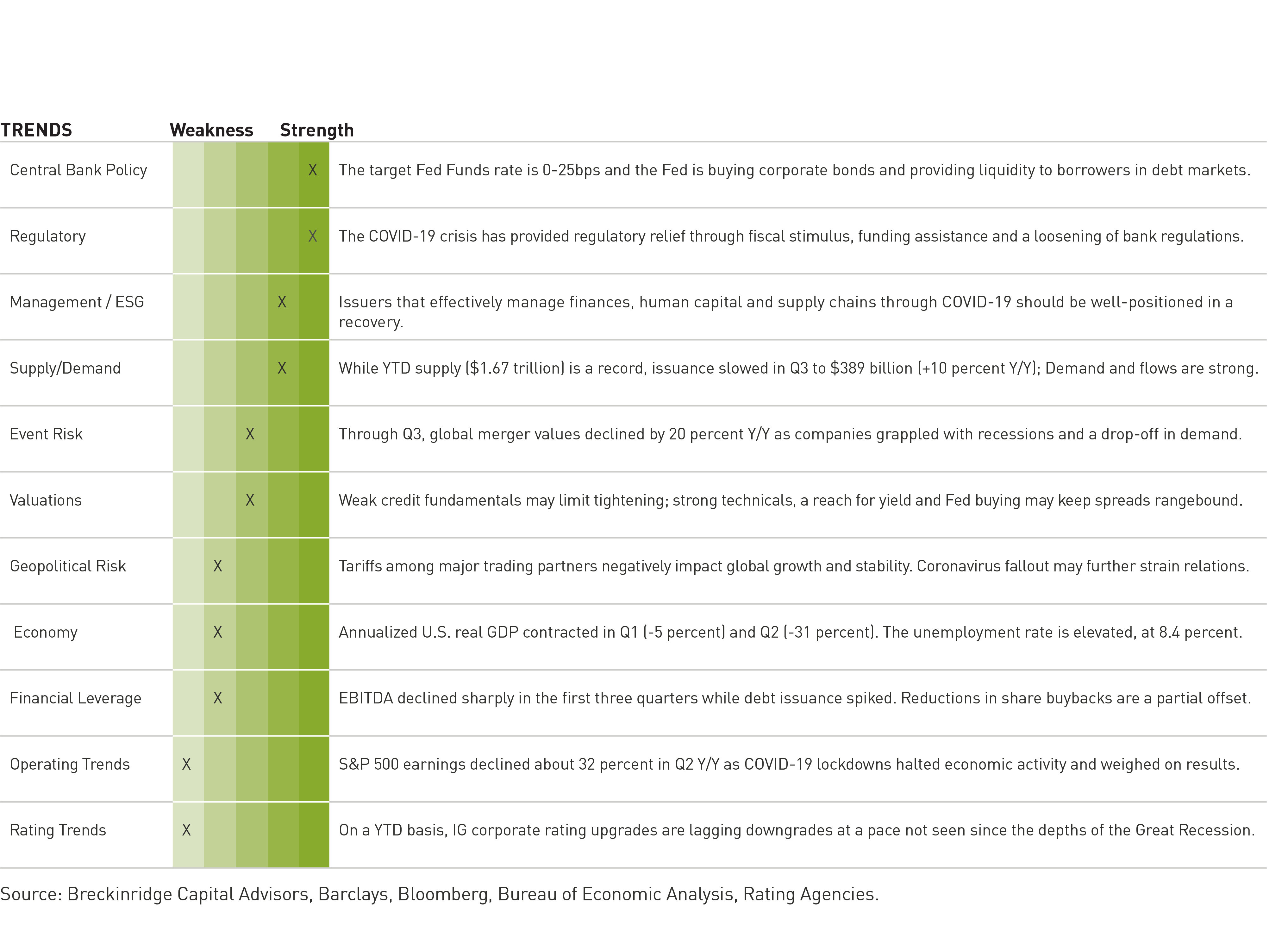 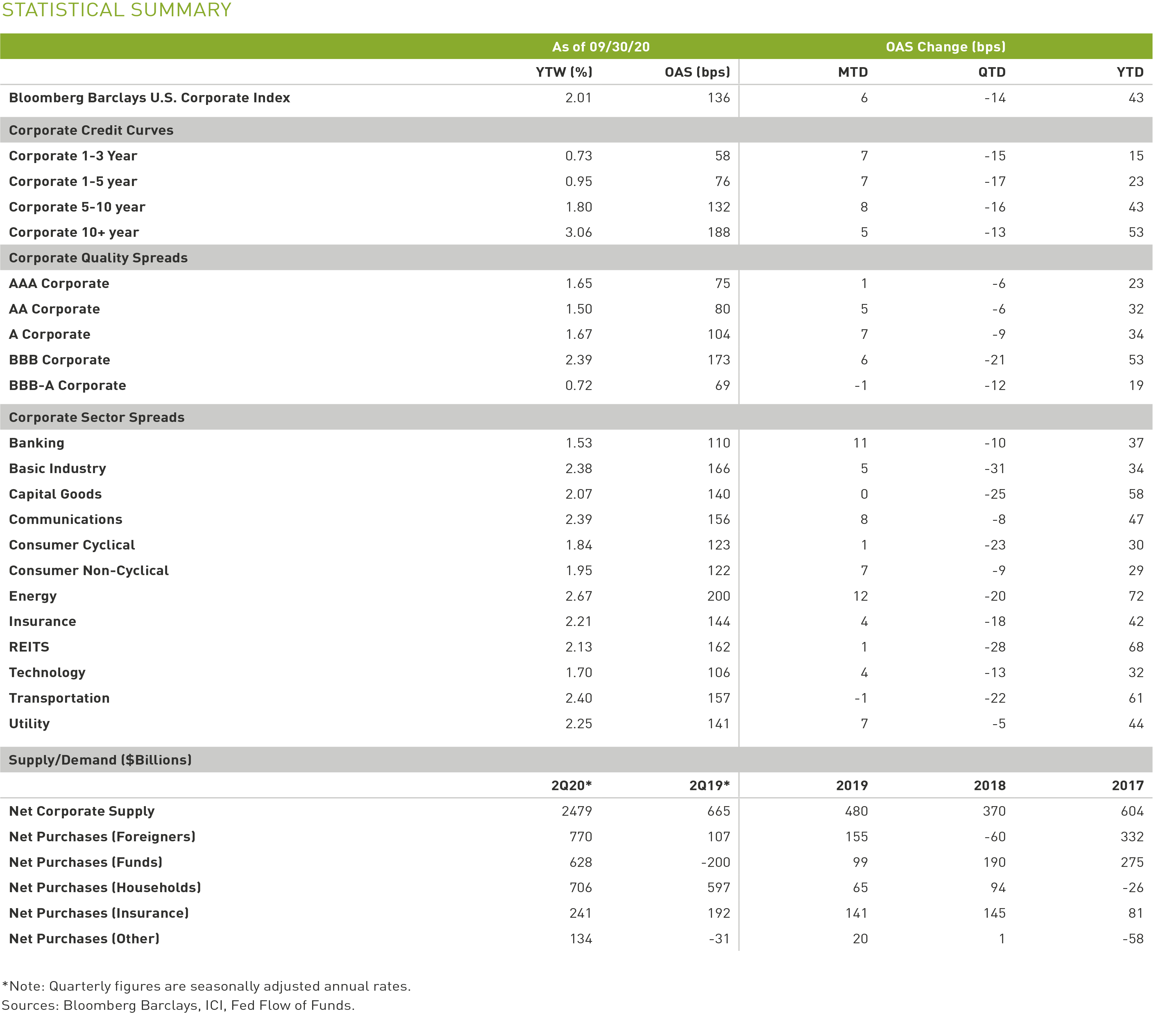