After July’s respite from year-to-date negative returns and rate volatility, both returned in August. While rates increased overall, the inversion that emerged in mid-July in the short to intermediate segment persisted and increased (See Figure 1). 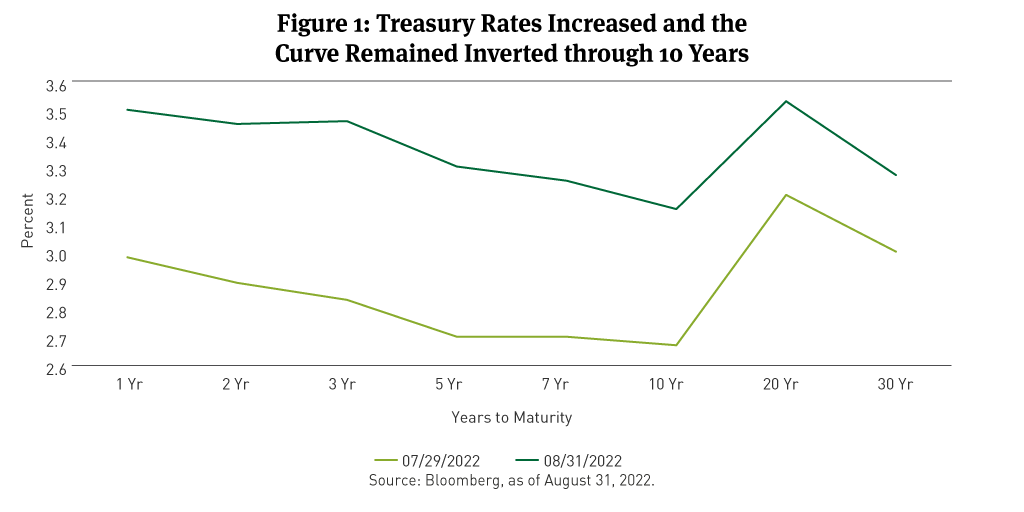 Treasury yields surged in August with the 2-year jumping over 60 basis points (bps) to close at 3.55 percent while the 10-year spiked over 50bps to 3.20 percent, marking a 2-month high.

Investors appeared to be growing more concerned about a potential recession. Comments of Federal Reserve (Fed) Chairman Jerome Powell at the end of the month indicated to many a reaffirmation of restrictive interest rate policies until inflation is lowered closer to the Fed’s 2 percent target. “While higher interest rates, slower growth, and softer labor market conditions will bring down inflation,” he said on August 26, “they will also bring some pain to households and businesses.”

The ICE/Bank of America Merrill Lynch MOVE Index1 fell from its July year-to-date highs through early August, then spiked in the second half of the month (See Figure 2). Chair Powell said in July that the Fed will be providing less forward guidance between meetings—the next scheduled Federal Open Market Committee meeting is September 20 and 21—indicating the Fed will be more data dependent in deciding future rate increases. 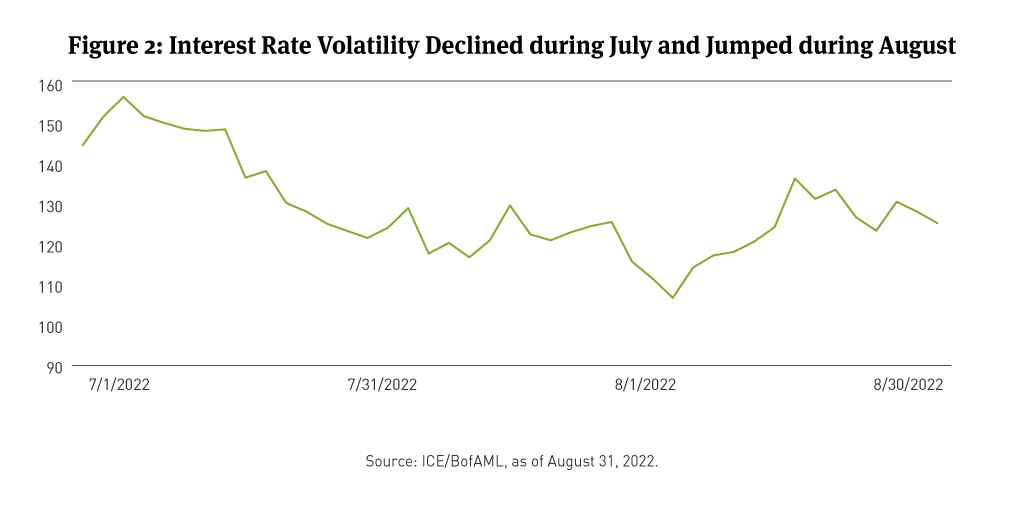 A substantive driver of improved consumer confidence readings from the University of Michigan and the Conference Board appeared to be lower gas prices, which can change quickly. Institute of Supply Management and Purchasing Managers Index data in August remained in expansionary territory.

Housing starts and existing home sales offset those favorable growth indicators, trending lower in July. In contrast, as of September 1, the Federal Reserve Bank of Atlanta’s GDPNow estimate of the growth rate of real gross domestic product (GDP) for the third quarter was 2.6 percent.

Although the advantage was small—3 basis points (bps) over AAA-rated bonds and 1bp over AA-rated bonds)—bonds rate BBB were the best performers in the Aggregate index and shorter maturities outperformed longer maturities.

Municipal yields tracked Treasuries and increased across the curve during the month (See Figure 3). Yields rose nearly 70bps in 2-years and more than 50bps in 5-years, while the 10- and 30-year spots closed the month 38 to 40bps higher. The municipal bond yield curve inverted briefly in mid-August, as short-term yields surged. The one- to five-year inversion of five basis points happened only 10 times during the past 41 years, according to The Bond Buyer. 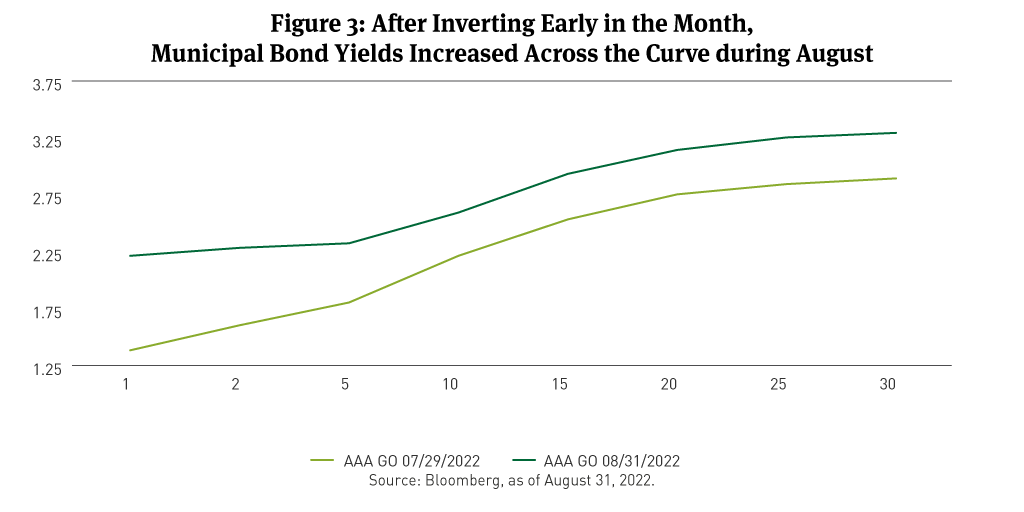 The curve flattened by 30bps between 2- and 10-year maturities (the 2s/10s curve), and by 28bps for the 2s/30s curve. Municipal/Treasury (M/T) ratios improved across most of the curve; the exception was 10-year where it tightened 1 ratio. (See Figure 4). 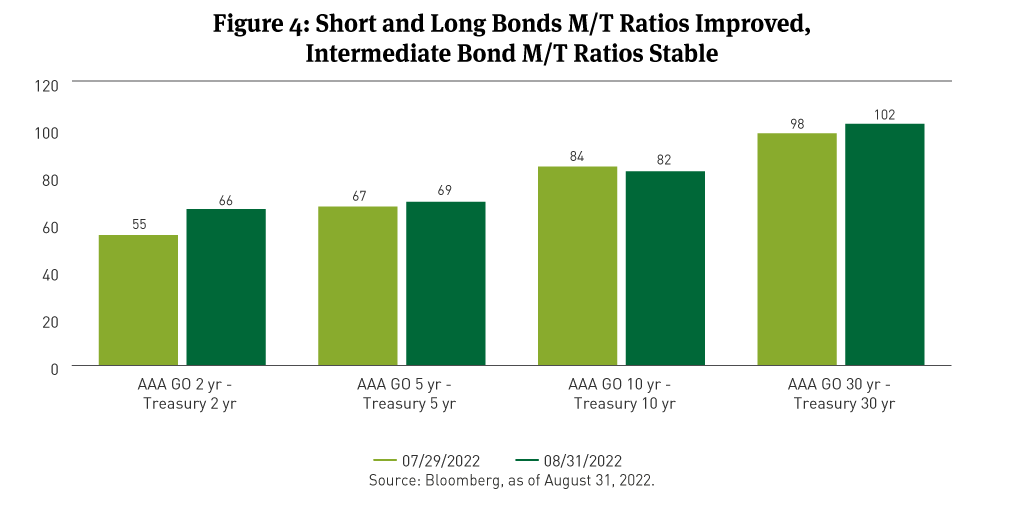 Municipal bond issuance rebounded in August more than $6 billion month-over-month but remains about 23 percent lower on a year-over-year basis, according to The Bond Buyer.

New money issuance year-to-date was 5 percent higher in August 2022 compared with the same period last year. Year-to-date refundings were off 81 percent from last year, based on data from The Bond Buyer. Mutual fund outflows remained elevated at approximately $4 billion, per Lipper/Refinitiv.

Reporting of quarterly corporate earnings drew to a close during August. As of August 7, Forbes, reported that companies missing estimates are unchanged this season, while those exceeding estimates gained 2.1 percent, based on FactSet data. Blended earnings, which combine actual with estimates of companies yet to report, were higher than forecasts on June 30. Six of 12 sectors, including energy, industrials, technology, health care, utilities, and consumer staples, were expected to post higher earnings when all reports have been announced. Blended revenues at the same date showed nine of 12 sectors having better results than they estimated than at the end of the quarter.

Following up on July’s best-ever monthly excess returns, MBS had negative excess returns when measured against duration matched Treasuries of 1 percent, according to the Bloomberg MBS Passthroughs Index. The conventional 3.5 percent coupon MBS was the worst-performing segment and the conventional 5 percent coupon, with positive excess returns of 7bps, was the best-performing segment. Conventional MBS are issued by the Federal National Mortgage Association (Fannie Mae) or the Federal Home Loan Mortgage Corporation (Freddie Mac).

Within Commercial Mortgage-Backed Securities (CMBS), agency-CMBS underperformed, with negative excess returns of 30bps, while non-agency had another strong month producing 26bps in excess returns. CMBS with 1 to 3.5 percent coupons and those rated A were the best-performing market segments.

BLOOMBERG® is a trademark and service mark of Bloomberg Finance L.P. and its affiliates (collectively “Bloomberg”). Bloomberg or Bloomberg’s licensors, own all proprietary rights in the Bloomberg Indices. Bloomberg does not approve or endorse this material, or guarantees the accuracy or completeness of any information herein, or makes any warranty, express or implied, as to the results to be obtained therefrom and, to the maximum extent allowed by law, neither shall have any liability or responsibility for injury or damages arising in connection therewith.

September 2021 Market Commentary
With sustained high demand for bonds in an environment of lower new supply, yields, and M/T ratios, we remained patient entering September.
From Peter Coffin – A Perspective on the Current Market
By Peter Coffin
Hear from our President, Peter Coffin, on the disorder in the current investment grade bond market.
Master Class: Bond Yields
By Jeremy Jenkins
Fixed-income market participants often quote the term “yield,” but the word’s context could be misunderstood because various types of yield exist and each is calculated differently.