During August, attention turned to Federal Reserve (Fed) Chairman Jerome Powell's speech at a virtual Fed symposium. While he reaffirmed regional Feb bank leaders’ earlier statements on stimulus tapering, Mr. Powell’s comments about maximum employment and inflation were more dovish than that of the other Fed bank presidents.1

Mr. Powell was careful to separate tapering from the start of rate hikes. He also reiterated his confidence that inflation could prove temporary. The Fed’s next meeting is scheduled for September 21 and 22. Market observers will look for details on timing and pace of tapering after that meeting.

The Bureau of Labor Statistics reported that the consumer price index (CPI) increased 0.5 percent month-over-month (M/M) and 5.4 percent year-over-year (Y/Y) in July. Core CPI, which excludes food and energy, rose only 0.3 percent M/M and 4.3 percent Y/Y. The increases were lower than many market observers expected.2

The Labor Department reported that initial claims for state unemployment benefits rose 4,000 to a seasonally adjusted 353,000 for the week ended August 21.5 Because seasonal factors as the summer closes can influence employment reporting, most observers had little reaction to the increase in claims, Reuters reported.

Treasury yields reversed course during August, increasing by 3bps at the 2-year spot while adding 9, 9, and 4bps in the 5-, 10-, and 30-year tenors (See Figure 1). They ended August at lower levels than they had touched earlier in the month. 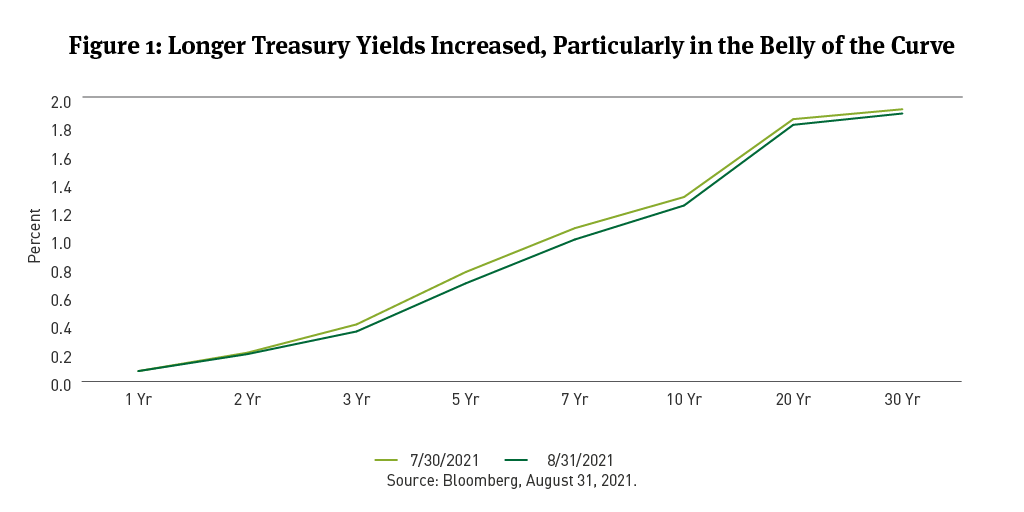 In our view, yields may trend higher over the next 6 to 12 months, as the Fed inches closer to a taper announcement. Over the short-term, rates may remain low due to strong demand from both domestic and foreign buyers.

The municipal yield curve modestly steepened during August, although somewhat unevenly, since July 2021. The 2s10s and 2s30s curves were 6 and 11 bps steeper, respectively (See Figure 2). 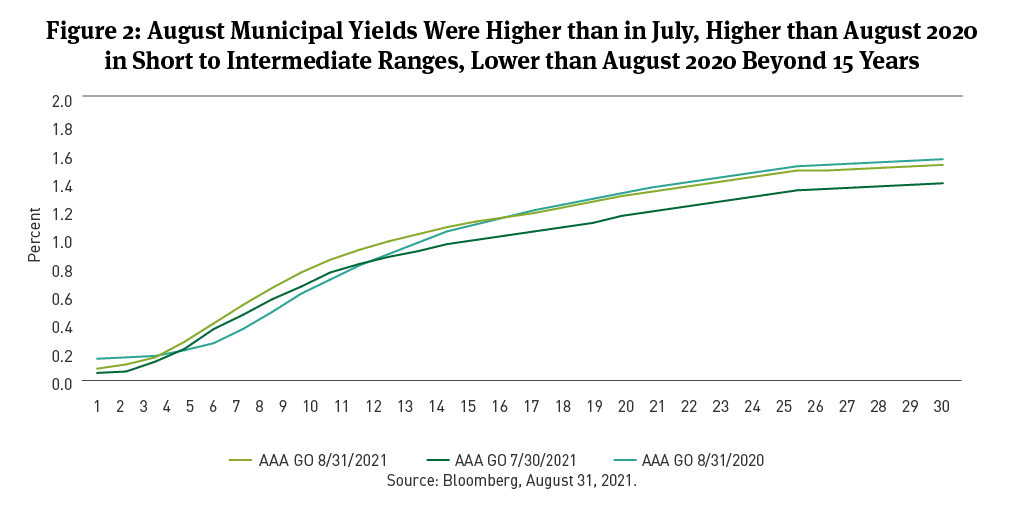 Municipal/Treasury (M/T) ratios recovered a bit from, but remained close to, July’s historic lows (See Figure 3). They also remained well below August 2019 levels. Ratios improved more in the 10-year spot than they did in the 2- to 5-year ranges. 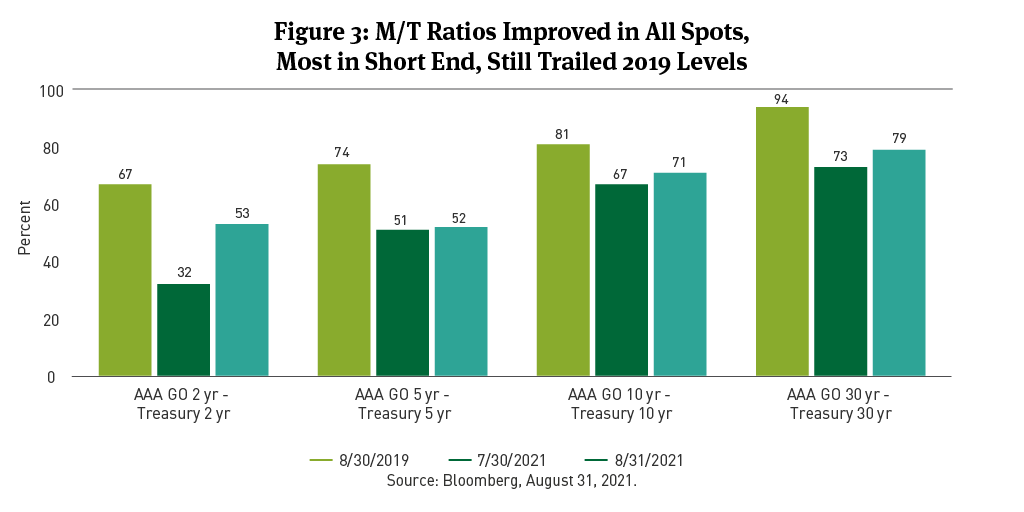 According to The Bond Buyer, August municipal bond issuance was $39.7 billion. August issuance was 11 percent higher than that of the prior month and 8.4 percent lower than that of the same month in 2020. The Bond Buyer said the Y/Y decline was due to factors such as rising interest rates, uncertainty over federal monetary policy, and unprecedented federal aid for state and local governments.

Municipal bond supply and demand remained strong, based on data from The Bond Buyer. Year-to-date total issuance in 2021 was $306.8 billion through August 31, versus $301.5 billion in the same period in 2020. Notably, taxable municipal bond issuance was lower in August by 7.6 percent from the prior month and 39 percent lower than the same month of the prior year, when pent-up issuance following pandemic-related restrictions influenced issuer decisions.

The Bloomberg Managed Money Short/Intermediate (1-10) Index declined 0.17 percent while the 1-10 Year Blend Index fell 0.13 percent. As has been the case for most of the last 12 months, BBB-rated municipal bonds outperformed higher-rated bonds, but the margin of outperformance in August narrowed on prospects for reduced federal stimulus and spreads on many lower-rated issuers through their pre-pandemic levels, causing buyers to pause. Shorter maturities tended to outperform longer maturity bonds.

High demand continued to shape the market, driving valuations higher and keeping absolute yields low. We continued to be selective. M/T ratios for 10- to 30-year maturities became somewhat more attractive during August. Still, 2- to 5-year maturities remained expensive, which continued to offer us opportunities to exercise our experience and familiarity in the taxable municipal bond market, where yields in that segment of the curve were somewhat higher.

We expect market technicals to shift to increased supply and lower demand in the tax-exempt market in the months ahead, with the potential to offer more opportunities to capture better relative values as the fall season advances.

Investment grade (IG) corporate bond spreads widened for the second consecutive month, per Bloomberg data, albeit only by 1bp to 87bps, and were 9bps tighter year-to-date by the end of the month of August. The Bloomberg IG Corporate Index (the “Index”) declined 0.30 percent for August on a total return basis and had a negative 5bps excess return compared with duration-matched Treasuries.

According to Bloomberg, the best-performing corporate sectors in August were Sovereigns, Packaging, Supermarkets, Airlines, and Metals and Mining. The worst-performing sectors were Oil Field Services, Utilities, Railroads, and Pharmaceuticals.

Index-eligible IG bond issuance in August, per Bloomberg, was $88 billion, down about 13 percent from July. Net issuance, after redemptions, was a modest $18 billion, down from $31 billion in July. Demand for bonds remained strong. According to Emerging Portfolio Fund Research (EPFR), monthly IG fund inflows were about $20 billion in August.

During August, FactSet reported that corporate earnings reports remained positive. With 91 percent of the companies in the S&P 500 having reported actual Q2 results, 87 percent reported actual earnings per share above estimates, well above the 5-year average, per FactSet.7

Corporate earnings reports for Q2 continued to support our view that improving credit fundamentals may be a modest strength for the IG market moving into the fall. Rating agency actions year-to-date reflected improved credit fundamentals. IG downgrade and fallen angel activity have slowed relative to the prior year. Growth in earnings may reduce gross leverage, and buoy key credit metrics across most IG corporate sectors. Healthy balance sheets provide large firms additional financial flexibility, which could include capex, share buybacks, dividends, and mergers and acquisitions. In a global context and relative to IG corporate bonds in the euro, UK, and Japanese markets, U.S. IG bonds offered continued higher relative value for investors through August.

Agency MBS modestly underperformed Treasuries during the month of August, per Bloomberg indices. Spreads on MBS backed by pools of mortgages with lower coupons widened the most, as the 10-year Treasury ended the month higher. MBS spreads widened due to a faster prepayment backdrop, record supply, and more talk of tapering. Spreads ended the month trading at the high-end of the year-to-date range.

Gender Diversity – Creating positive, long-term change
Breckinridge Capital Advisors is partnering with Girls Who Invest (GWI), a non-profit organization dedicated to increasing the…
Harnessing Choice in Fixed Income Investing
By Cara Early
In the same way that some equity investors object to owning or profiting from companies deemed at odds with their moral compass, a growing number of bond investors want to tie their capital to issuers that share their values.
July 2021 Market Commentary
In July, the persistency of low rates and strong supply were overriding factors as bond investors looked ahead to the second half of the year.