The Key Factors and Why They Matter

Libor: The interbank lending rate for U.S. dollars outside the U.S.

Interest Rate Swaps: Interest rate swaps are transactions in which cash flow streams are “swapped.” For example, an investor may swap a fixed cash flow for a floating cash flow.

Swap Spreads: The swap spread is the difference between the swap rate and the U.S. Treasury rate of the same maturity.

Swaptions: Options that allow the investor to enter (or not to enter) a swap.

View from the Ground

The London Interbank Offered Rate (Libor) is the benchmark rate for about $6.5 trillion of business loans, consumer loans and securitized loans in the U.S.,2 including the vast majority of adjustable-rate mortgages, student loans and auto loans. Libor is an indicative short-term interest rate administered by the Intercontinental Exchange (ICE). A panel of large international banks is polled to find the rate at which each bank could borrow U.S. dollars in the interbank market outside the U.S. The Libor rate is a trimmed mean3 derived from the quotations provided by the panel banks. ICE calculates, or “fixes,” Libor each day at 11 a.m. London time, and releases the rate at 11:45 a.m. London time.

Every business day, the Libor rate is set for 1-month, 3-month, 6-month and 1-year maturities, and the market focuses most on the 1-month and 3-month tenors. Libor is an important barometer of the health of short-term funding markets. The 1-month tenor largely tracks the Fed Funds Effective Rate (plus a credit premium), but that relationship can diverge in periods of market stress. For example, during the global financial crisis, the Fed Funds Effective Rate fell but Libor rose as banks became less willing to lend to each other. Figure 1 illustrates this by charting the spread between Libor and the overnight indexed swap (OIS) rate, which is an overnight swap linked to the Fed Funds Rate.

Libor is often used to set lending rates in securitized products. That is, most floating-rate ABS or MBS provide a coupon of Libor plus some spread, such as L+ 50 (1-month Libor plus 50bps). Banks, which issue ABS, often issue floating-rate bonds to manage their asset-liability mix. Banks prefer to pay floating-rate coupons on their liabilities, because the loans they’ve made (their assets) usually have some portion that are floating-rate.

Partly due to recent Libor-fixing scandals,4 Libor is expected to be phased out over the next few years and replaced by the Secured Overnight Financing Rate, or SOFR. The New York Federal Reserve began publishing SOFR in April 2018, and the rate is based on transactions in the massive U.S. repo market. See our blog post What to Know About the Libor Phaseout for more information on this transition and what it means for investment grade fixed income.

Eurodollar futures tell us the market’s expectations for lending rates – or Libor – in the future. Eurodollars are U.S. dollar time deposits at foreign banks. It is one of the largest funding markets in the world, as these deposits act as a lending mechanism for banks and a way for banks to manage their balance sheets.5 The bulk of eurodollars are interbank transfers that pay some rate of return (typically Libor) to the holder. Therefore, to avoid arbitrage, the interest rate on eurodollar futures contracts must line up with the market’s future expectations for Libor. Overnight Libor and the overnight Fed Funds Rate tend to track closely, making domestic overnight lending comparable to the same lending overseas.

Eurodollar futures contracts are traded on the Chicago Mercantile Exchange (CME) and are highly liquid out to maturities of about 5 years. The contract prices are based on where the market is expecting 3-month Libor to be set two days before the third Wednesday of every March, June, September and December.

The eurodollar futures are quoted in dollar price rather than yield or spread, and the quoting convention is 100 minus the expected rate. Figure 2 shows forward rates for 3-month Libor at various future dates. The dates are clustered together by color. For example, the green “pack” starts with a 2-year forward, 3-month contract, and follows it over the course of one year. 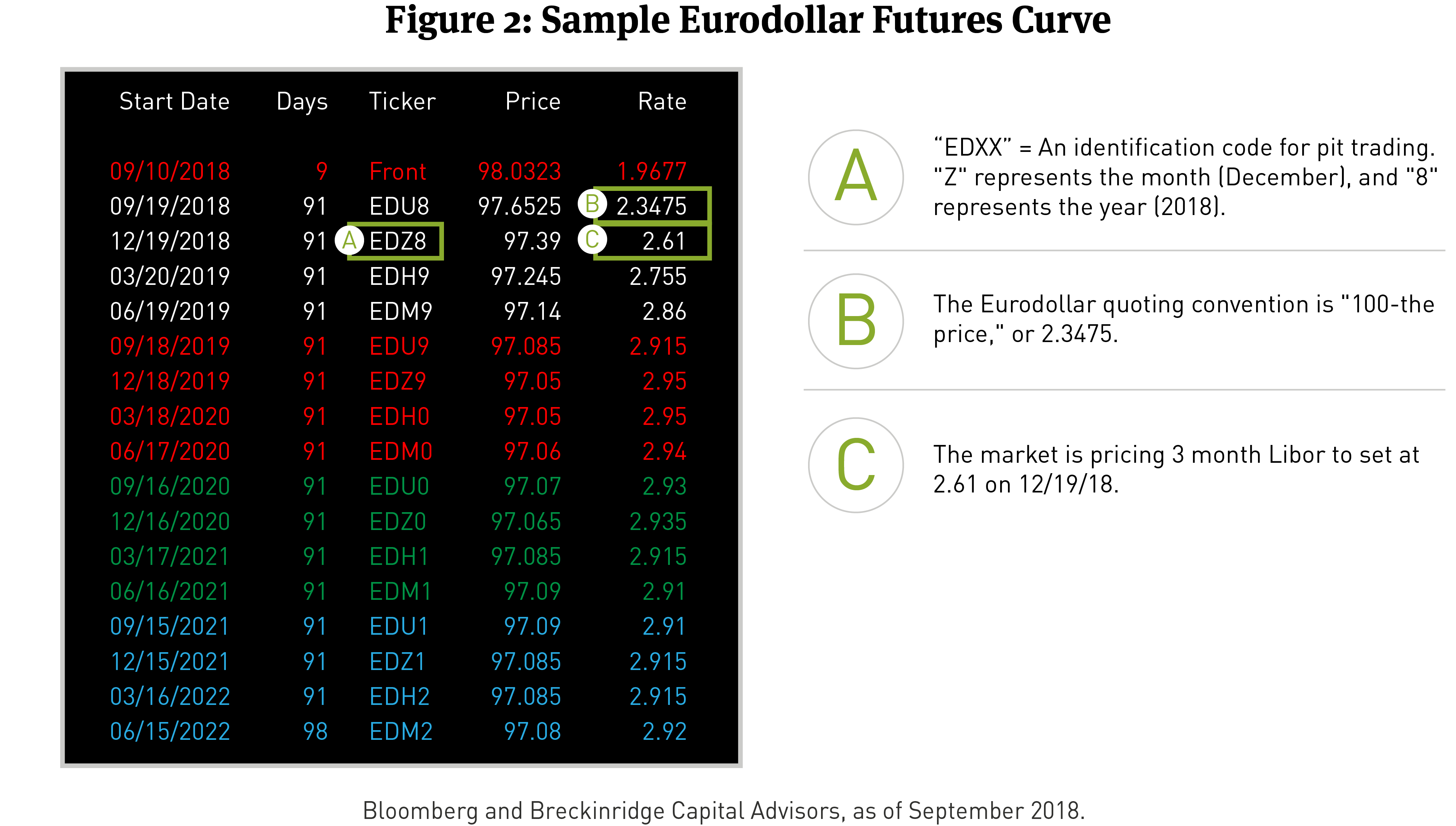 Buying (going long) or selling (going short) eurodollar futures contracts allows investors to lock in a set rate. If, for example, a company is planning to issue debt in the future and is concerned about rising rates, the issuer could sell eurodollar futures contracts. If rates do in fact rise, the gain on the contract sale would be used to offset the increased cost of newly issued debt.

The swaps market is one of the largest, most-liquid markets in the world, and MBS and ABS are typically benchmarked to swap rates.6 In a simple form, an interest rate swap is an exchange of fixed cash flows for floating cash flows.

As we explained, the eurodollar futures curve shows the expected value of Libor for various periods in the future. At the time of an interest rate swap, the swap rate is approximately equal to the average of the floating rates in the forward Libor curve over the term of the swap. For example, in Figure 3, the “swap rate,” or the fixed rate received by the investor for the period September 2018 through September 2020, is roughly an average of the eurodollar contracts of the same tenor (the “white and red packs” in the Rate column of Figure 2).7 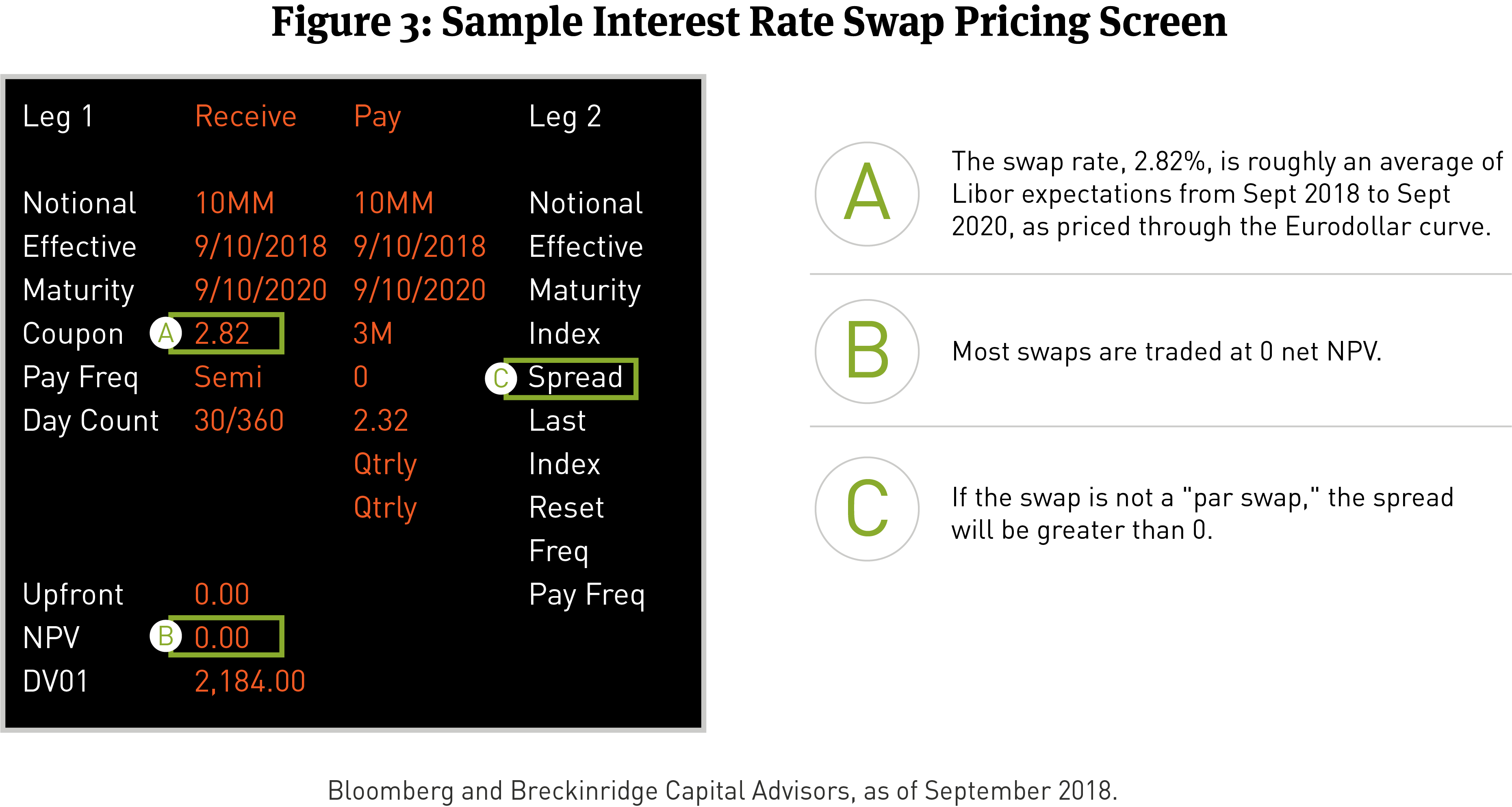 Interest rate swaps have many uses. If investor demand for fixed rate debt is high, bond issuers will often issue fixed rate debt, but use an interest rate swap behind the scenes to swap the liability from fixed to floating. However, these swaps create challenges, as they require capital from the issuers and create exposure to counterparty risk.

The swaps market is also used extensively for interest-rate risk hedging, and the liquidity is instantly created from the existing cash flows of the transactions.

The “swap spread” is the difference between a swap rate and the U.S. Treasury rate of the same maturity. In its most basic form, the swap spread can be thought of as the premium over Treasuries that banks must pay to receive unsecured funding, given that banks are the primary counterparties to swaps. However, other fundamental drivers can have a significant impact on swap spreads as well.

For example, in the front end of the curve (1- to 3-year maturities), general funding pressures can affect swap spreads. In addition, many market participants monitor Libor versus the OIS, which is an overnight swap linked to the Fed Funds Rate and a proxy for repo rates. The spread between Libor, which is unsecured, and the OIS rate, which is collateralized borrowing, can drive swap spread levels.

In recent years, however, swap spreads have become a bit of a random walk and do not necessarily fit past pricing norms. Swap spreads have declined post-crisis (Figure 4) for several reasons: 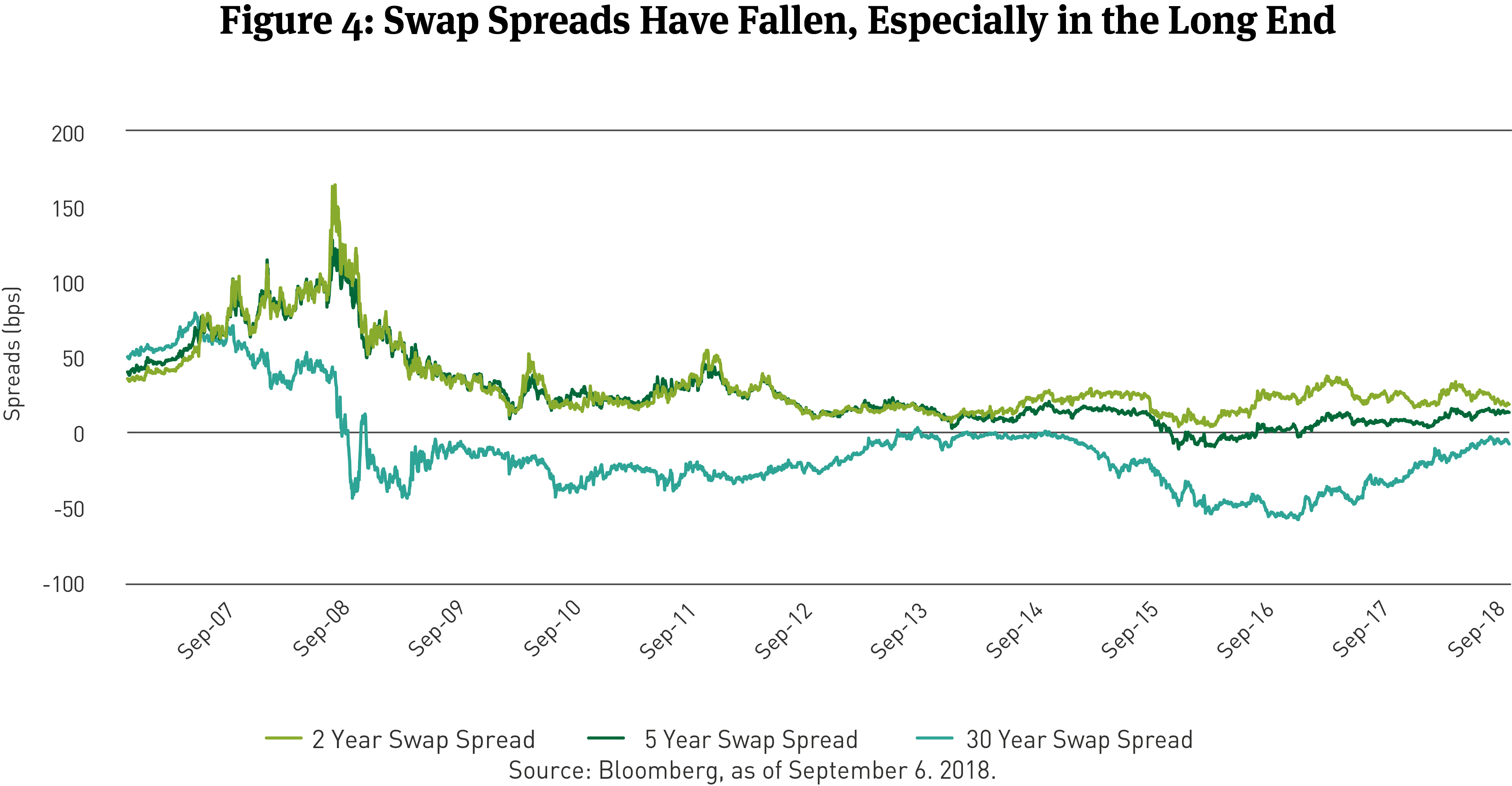 The swaption is priced based on implied volatility. Figure 6 shows an implied volatility surface. The circled number, 68.27, can be thought of as how much the 5-year swap rate is expected to move in 1 year (in bps) in either direction.9 This implied volatility is a direct input to price the swaption in Figure 5. The premium, which is $122,462 in our example, is the upfront payment the buyer makes to own the right to exercise this swap.

If swap rates rally after one year, it may make sense for the investor to exercise the option and receive an above-market fixed cash flow stream. In this case, the swaption is known as being “in the money.” On the other hand, if swap rates sell off and the investor is “out of the money,” he could do nothing – but he loses the premium on the swap.

To be profitable for the investor, rates cannot just stay at the same levels: Rates need to move, which makes swaptions “long volatility.” The swaptions market is the largest, most-liquid volatility market in the world and is used interchangeably with the MBS market to make volatility bets, as MBS is “short volatility.” Swaptions are also used to hedge MBS.

[1] All-in yields are total yields on bonds, including the benchmark rate (for example, Libor) plus the applicable spread.

[5] Based on data from the 3Q18 CME Group Leading Products Snapshot, available at https://www.cmegroup.com/education/files/leading-products-snapshot-2018-q3.pdf.

[6] Bank for International Settlements, as of September 2018.

[7] It is “approximate” because the fixed $25 DV01 per million of notional in the contracts needs to be adjusted for the positive convexity (or nonlinearity) of swaps, or of bulleted cash flow bonds in general.

John Bastoni, Breckinridge's securitized product trader, outlines some of the top trends on his radar as we enter 2019.

Driven by muni bond market conditions, housing bond issuance as a percentage of total municipal market issuance is running at a 10-year high of 8% in 2019.